Well....the Times does hint that they have some relationship with the guy, but they aren't very clear on 'HOW'.  So you are left to speculate. 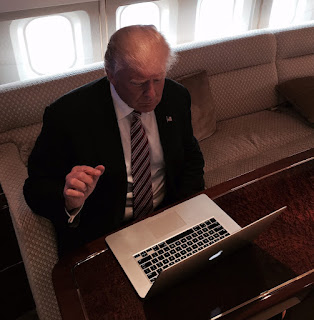 Maybe Donald Trump had his geek-guys set up some fake email account, and for almost two years.....Trump late at night, has sent various bits of data and info to the NY Times....feeding them some insider info, and they've praised him continually on the privileged information coming in.

Is it possible that Trump himself is the insider?

I've sat and pondered this.  CNN folks and the Washington Post folks....seem to glee over the fact that they know the guy, but then....maybe it's all just fake stuff, and the NY Times simply plays along and thinks they got the real insider to the White House staff.

Of course, it sounds crazy....but Trump has learned to use the news media at almost every single junction.  Maybe he figured long ago....to use them for a long-term goal.
at Thursday, September 06, 2018 No comments: