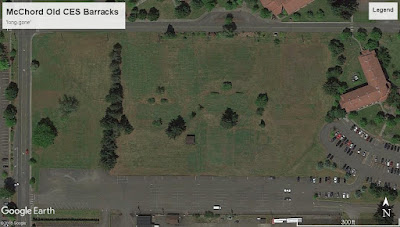 I sat on Google Earth today and went looking for the old 1980 Civil Engineering Squadron barracks that I lived in for a year while at McChord (Tacoma, Wash).

Well....it no longer exists.  That whole grassy area?  That was a 100-car asphalt parking lot and two barracks built in the 1974 era.  Gone.

When I arrived in 1980....this was already showing age and quality problems, at the six-year point.  It was completely wooden in nature.  The floors creaked when you walked on them.  Everything about the building was defined as cheap....the doors, the curtains, the carpet.  The windows had trouble opening and closing.  At the time, half of us figured that the building would be lucky to reach the 20-year point.

The positive of the structure?  You were two minutes away from the work-compound, and four minutes from the BX.  The negative?  Going to the chow-hall meant a 15-minute walk.  So you couldn't delay yourself in the morning for breakfast....you had to be up by 6AM and walk straight over.

In ten days, I'll be off on my first and probably last trip to South Africa.  For a number of months, I've been reading up on the nation, and come to realize that it's probably five years at best....away from some civil war or internal destruction period, and what exists today (and for the past couple of hundred years)....won't be around by 2025.

So, the chief topic of destruction?  The number three political party in South Africa has a goal....to take without compensation....roughly 50-percent of the farm land.  No one says this is really the end of the discussion, and some suggest that the full 100-percent land-grab will be the end-result.

1.  Population growth.  Back around four-hundred years ago when the Dutch started to arrive in the region of South Africa....roughly three times the size of California....they found mostly nothing.  The population, with the original group of Dutch and the local tribes of the region....added up to 700,000.  You can imagine the US region of California, Oregon, and Washington-state....with 700,000 (just a bit more than exist in Portland today).

Industry growth, the job-market, fair wages?  It can't match the population growth.  It probably maxed out in the 1960s.

So the public sees virtually every angle of life to be highly unfair and life is about poverty.  Any idiot can create a political party....talk about redistribution of something (doesn't even have to be limited to farms) to bring fairness and happiness.

2.  The farm story.  In this period of 1650 to 1700....the Dutch came and basically negotiated with local tribes over land.  The Dutch offered land deals....cattle for property.  The chiefs accepted and some hostile situations were avoided.  But let's be honest....in this whole region of 700,000 people in the area the size of three Californias....there's just an awful lot of land and nothing of a threat.

The Dutch and later the English who came in....came to figure out....only around 15-percent of the land is usable as farms or ranch-land.  That's it.  In some cases, it's only useful if you irrigated the property.

The discovery of gold and diamonds (1860s to 1880s)?  Well....this brought conflict, and eventually the Zulu War.  The avoidance of all-out war with the tribes ended at this point.

The bulk of prime farmland?  Owned by white Dutch/English folks.  Some inherited their property.....over and over.  Some bought their property.  Fairness?  The treaties signed by the tribal chiefs had some legit situation involved....none of this is remembered today, and probably half of the population is attached more to political parties, than to tribal units.

Today, the banks are attached to the farming sector and part of the success story of the past hundred years. When this land law is established....the banking sector will be standing there with numerous loans and unable to really assess success or failure.

The fear of whites?  Why stop at just farms?  You could make a funny rule that all hospitals in the country must be black-owned and managed.....so overnight, you'd find a new owner who was just 'given' the property.

Yes, all of this leads to civil war and conflict.  Tribal leaders?  I suspect they will finally stand up and challenge political leaders, and the country will be sub-divided into twenty-odd countries.  The Western Cape area might be able to survive as one single nation (but it has the least of farm lands).

So much confusion.....that locals might leave and try to immigrate into Europe?  I would suggest to be one of the ten basic achievements of this chaos approaching.

What are the chief ingredients of a Jerry Springer Show?

3.  Fakeness (one almost imagines that the six people lined up as the participants, are just hired for the role).

4.  Whores. About seventy percent of the women tend to be trailer-park trash, skanky, or working on marriage number four.

6.  A verbal or physical fight.

7.  By the end of the show, the odds of participants ever getting back on friendly terms are zero.

8.  Body-builder guards are protecting Jerry or the participants.

9.  There's always a history which requires five to eight minutes to tell the basic story.

10.  In ten-percent of cases, there's a fake-woman or a transgender guy involved.

So you look over the Kavanaugh senate episode, and it's curious.....nine of the ten basic ingredients (no fake-woman/trans in this pony-show) are in this senate hearing.

Last week, I was reading some commentary by a conservative gal (she at least says this), and she said about an hour into the Professor Ford episode....she felt it was inappropriate for any kid under ten to hear the commentary....particularly in the middle of the day when kids might flip through channels.

I sat and pondered over this.  Maybe the Senate ought to make up a new rule.....limit questions to only a 10 PM to 5 PM cycle, so kids wouldn't get all hyped up on booze and lust.

The chief question to ask here.....have we arrived at Jerry Spring-politics, and will this become the new norm?  And do we really want that theatrical-style of politics?  Personally, if they'd added some trans-guy-woman, it might have made this pretty interesting, and that Senator Graham guy would have had a lot of fun asking him/her a bunch of questions.
at Saturday, October 06, 2018 No comments: