There are a hundred skills to develop in life (being able to handle finances, resilience, critical thinking, empathy, handling stress, etc)....but I tend to rank discernment as the one skill you need to have some capability over by age 18, and hopefully have a fair amount by age twenty-five.

Discernment is where you are faced with an issue/problem....prioritize the situation, and opt for the best possible solution (maybe not the perfect solution).  Basically, it's wisdom being utilized to resolve something.

Can a school or university teach or lay out discernment?  I'd argue that unless you end up in a class of logic-thinking or some history course where you have to debate events as part of the grading process....you won't find this as a school offering.

The problem is that you need people with discernment talents.  You need some to look at something and admit that the program or project is doomed and will never work.  You need a guy who can tell you why your life-plan needs work.  You need discernment skills to tell you that the $80k being spent on some crappy worthless degree is a waste.  You need this type of thinker to point out the dangers of partying after midnight at a honky-tonk with thugs is stupid.

You would think some college would go out and start a course in this....related to logic or philosophy....and entice young people to develop this skill.
at Tuesday, November 27, 2018 No comments:

Postcard From My Trip 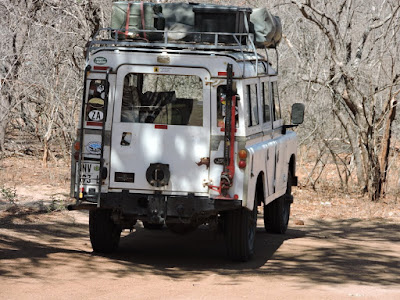 One of the things I admired while in South Africa was this twenty-old 'jeep' that a couple were using to transit South Africa.

Their 'drive' was settled around six months of just driving through every single inch of the country, and into some rough vallies. They had the tool-kit, the camping gear, the grub, and all the necessities of life.

They had the gear to camp out, and occasionally stay in a hotel or B/B.

Back in the 1960s and 1970s....you could have done this and had zero fear except for lions or snakes.  Today?  With all the violence and criminal activity....it's generally unwise.

There used to be people in the US who'd go and do some three-month period of adventure trek, and live out of a jeep for weeks.  Today, it's rare.
at Tuesday, November 27, 2018 No comments:

I sat and watched some news piece this morning over the crowd at the Texas border, and the use of tear-gas.  The journalist (safe to say they were awful supportive of the migrant guys)....laid out this terrible in-humane use of tear-gas.  After sixty seconds of their chatter, you had this feeling that it was the 'end of the world' for these people who'd been hit with the tear-gas.

I sat over this.

Around in January of 1978 (six months into my enlistment into the Air Force), I was in-processing through the last part of Rhein Main's introduction period, which meant a half-day of fake combat training (my term for it).  You had to be able to grasp the wearing of the chem-warfare suit, and there was this three-hour period where they talked about the terrible things which would occur if war started up and the Soviets used chemical warfare.

Then came this brief one-hour introduction to the gas-mask, and a visit to the 'room'.  You basically entered with a group of five folks and the instructor....with the full-up mask on.  The instructor had some tear-gas capsule set off, and he wanted you to take the mask off....count to three....then put the mask back on.

You got a pretty good 'huff' of tear-gas.  Then he let you leave the chamber.  It was one of those miserable experiences that you disliked, and repeated every twelve months, for the next 18 years.  Toward the last three years in the Air Force, I found various ways to skip out and miss the training episode.  So I probably did at least fifteen of these tear-gas episodes.

I kinda look at the journalist hype and just start laughing.  It's harsh stuff, but it won't kill you.  If you don't like tear-gas....don't get into some stupid environment where it's going to be used.
at Tuesday, November 27, 2018 No comments: