The Consensus Against Einstein 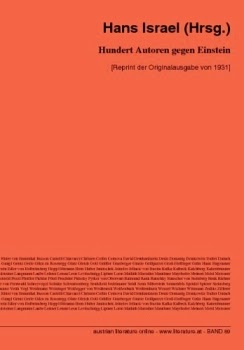 I will occasionally point out curious pieces of history, and things are quietly forgotten.

It's a curious book, published out of the University of Innsbruck in 1931. Hans Israel was the chief author, although roughly ninety-nine other "scientists" helped to contribute to the criticism of Einstein, and his theory of relativity.

Roughly twenty-nine individuals wrote brief essays over their criticism, with nineteen additional folks making a comment or two, and the rest simply signed on as agreeing.

It is still sold today, at least in paperback version.  106 total pages.  Amazon has it listed, although it doesn't appear to have any commentary or reader observations, as you'd find with most documents that Amazon sells.

The hype against Einstein and the theory of relativity?  Well....you run into roughly three areas of thought.

First, scientists usually hate been left at the curb when new concepts arrive and it disagrees with their previous understanding of things.  They've bought into concept A, and they don't like being challenged to accept some type of change.

Second, in the way that some geeky guys stand around and argue for hours about the Marvel world being better than the DC world (Spiderman versus Batman)......scientists do the same thing.  If you dragged seven male frog scientists into a room, with lots of beer, lusty women, live NFL football on the screen, and ribs on the grill.....the likely topic of conversation would be frogs, and they'd debate the finer qualities of frogs over and over, and over.

Third, scientists hate when someone really pulls a rabbit out of the hat, and leap-frogs over them with a fantastic theory and tons of evidence to support it.  Competition.....in the mind of most scientists.....is a evil thing.

So, in 1931.....a group of guys stood up against this dimwitted Einstein character, and his stupid theory of relativity.  And they were wrong.

This kinda makes a person sit and ponder.....what else might we be debating in the wrong fashion, and finding some consensus being built in a stupid fashion?  And if we recognized it.....would we even be willing to stand up and comment publicly about it?
at Wednesday, September 10, 2014 No comments: