There were two great stories today about folks who take med's. 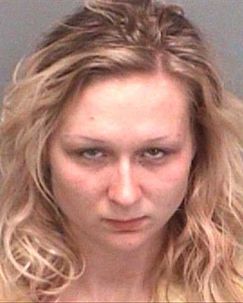 First, the vampire story. There's this gal....Josephine Rebecca Smith, who is sitting in either a jail unit or a mental today.  She attacked this old geezer.....69-year-old Milton Ellis....who ended having to off to a local hospital.  From the various news reports....somewhere down in the Saint Petersburg area of Florida....around midnight (of course)....Milton ended up falling asleep on the ground.  There are a fair number of indicators to say that he is a homeless guy.

As he was sleeping....Josephine apparently came up and started to attack him in a vampire fashion.....letting him know that she was going to eat him and bit him on the face and body.  Folks alerted on this....cops got called.....and Josephine got taken off.

The cops tend to think that she's on some kind of medication but no idea what.  The picture here....is her mug shot after being taken down to the cop station.  I sat and looked at it for a while.  Normally, I will recommend gals like this to my brother....that a Bama guy would not typically take out or engage in conversation with.  I'm of the mind that she might be an interesting character.....up until the point where she missed some of her meds.  Course, the more you gaze at her picture.....you start to get this feeling that she might be a bi-polar vampire gal, and that's crossing the line.

My other story....comes out this terrible shooting out in Carson City, NV.  Several folks at a local IHOP ended up getting shot by a Latino guy who just went whacko and started shooting.  The Latino is dead....so he can't tell his story.  So this is what we know about him.  Almost everyone who knows him.....says he's a gentle guy and would never harm anyone.  Then they come around to admit he's had emotional issues for a decade, and taken medication.  They won't say what kind of medication.

I'm guessing that he's changed doctors in the last two months.....and switched from old meds version one to new meds version two....and maybe mixing the two at various times together.  And somewhere in the moments of confusion.....he just didn't know who he was or what he was doing.

Here's the thing to ponder upon.  The vampire gal and this Latino guy?  They are just two of 300k folks in America on some kind of medication....who might be capable of flipping tonight and killing you as you sleep.  Their doctor signs the prescriptions and just figures it's the best situation for all concerned.  And we just accept it.
at Friday, September 09, 2011 1 comment:

Curse of the Mullahs

This is what we know....three Islama-dudes are likely within the US and planning this 9-11 event around car-bombs in DC or New York.   Period.  We know absolutely nothing else.  So everybody, from the New York cops to the FBI....are on mostly extended hours and treating this like a big deal (which it might be).

You can imagine the three Islama-dudes...."Little-Mo Man, Larry-Mo, and Mo-Mo".  They are likely sitting in some hotel in eastern Kentucky with suitcase of car-bombs laying on the floor, and watching the CNN guys explain fifty percent of the plan.  Sadly, there wasn't much of a plan to start with.  Mullah Jimmy-Mo (back in Saudi Arabia) developed this idea one afternoon after watching some French movie)....with only five lines of actual plan.  Nothing much has ever gone past the five lines because Mullah Jimmy-Mo didn't want a really stupid plan to be obvious to the boys (they might not volunteer then).

Somehow, they have to get from the house or the hotel....across a couple of hundred miles probably....with a car or two that they've purchased recently for a fairly cheap price (likely less than $2k each).  They have to depend on this pitiful Chevy making it from start to finish....so it'll be in place for the planned blow-up.  The VIN numbers will be obvious to the cops within an hour after the explosion if it occurs.  They will be at the last known address for the owner, and find the trail within five hours.

"Little-Mo Man, Larry-Mo, and Mo-Mo" have got maybe twelve good hours to make their run and try to be several states over.  Every detail of their life will be known....the failed marriages, the arrest for marry-j-u-wanna possession in 1988, and even the charge-card expenses for stuff they bought at K-Mart last week.

The odds of success in the planning with "Little-Mo Man, Larry-Mo, and Mo-Mo"?  In almost every effort made to harm innocent people since 9-11....the perpetrators have screwed up.  It's like a 90-percent chance that it's so badly screwed up....that the actual planned event never occurs as the boss planned.

So across DC today....at least a thousand cops and federal guys are watching for "Little-Mo Man, Larry-Mo, and Mo-Mo".  Every car....every truck....and every paper-bag left in sight....will be checked out.  The problem here is that statistically, by the time you count all these guys, and the 500k residents of the region who are smarter than "Little-Mo Man, Larry-Mo, and Mo-Mo"....you've got an entire army facing the boys.  The numbers aren't in the favor of the boys at all.

The sad thing is....they could have have had productive lives....go onto great jobs....owned their own house....and been respected in their neighborhood.  Missed chances and opportunities....all wasted because of dimwitted Mullahs.  The boys were cursed in a way.  The Mullah didn't care about their lives, or anyone else's life.  It was a scripted Mullah event....that's all.
at Friday, September 09, 2011 No comments:

If you've been watching the Fast and Furious gun episode stuff this week....there were two curious things which might turn into a big mess for some government folks.

First, it came out today that a crime occurred in Arizona....which resulted in one of the Fast and Furious guns being found in the truck.  The driver?  Well...he appears to be connected to drug crimes and will face various charges.  The problem here might be the state suddenly waking up and not only charging this guy with gun related crimes, but finding the guy who approved the sale of this weapon...up through the ranks of US government.  A state charge or two?  Maybe worth six months in prison, if you could drag this into a state court room.  The Fed guy might feel like it's a serious matter at that point.

It is possible that the junior guys of the ATF group...just decided to never tell their bosses in DC about any of the operation.  Maybe....there's dozens or hundreds of ATF operations underway throughout America today...even extending in Canada....which none of the top twenty-five bosses of the ATF headquarters in DC or attorney general Holder know about.

Maybe the ATF guys in New Mexico are the ones in charge of the secret UFO operations and quietly hold the Crystal Skull, the Ark of the Covenant, and the Holy Grail. Yep, maybe that's how secrets are kept.....which I might be able to convince myself if I had a case of Pabst Blue Ribbon.

For some reason, I think the ATF guys have a serious problem on their hands.  Either they are as stupid as Attorney General Holder indicates, or they might be spending time in either Arizona or Mexican jails.
at Friday, September 09, 2011 No comments:

The "Pass The Bill" Bill

I ended up watching the President's speech.  It's probably sixth speech of the year that I've watched him give.  It needed to be a five-star speech.  By the end....I was feeling mostly it fell into the 2-star marginal speech category.  The jobs potential?  It's hard to say.  It kinda felt like a guy was having a heart attack and we needed to use the defibrillator but in this case....we just had a K-Mart defibrillator with four AAA-batteries in it.  The "jolt" might just be a tingle, and I'd be in NCAA-heaven with Bama playing Auburn everyday (it's the best a guy from Bama could hope for....Iron Bowl in heaven daily).

The $450 billion?  Well....it'll come out of some imaginary pocket like the $800 billion that we found for stimulus a while back.  If it did turn around the jobs market, then we'd actually have more folks paying taxes, and maybe make the money back.  But if you only created 100k jobs over twelve months with the $450 billion, then it's mostly a waste of time and money.

At some point....I had this deja vu feeling over "pass the bill".  Later on, some journalist commented....it got mentioned seventeen times during this speech.  I kept thinking it was a psychological thing.....like when Luke Skywalker used his Jeda powers to make some dopey guy do something that he wouldn't normally do.  Luke usually had his hand out and was focusing hard on his victim.  To be honest, I never saw any mortal character in Star Wars defeat the Jeda mindmelt deal.  It's hard to say if that Boehner guy or Cantor kid from Virginia can stand up against the President's Jeda powers.  Mortal men just can't fight it....usually.

So will it pass?  I'm thinking that the House ought to split this up into individual bills....for each single item. Up and down vote.  Seventy percent of the bills would easily pass by the Republicans in the House, and likely stop in the Senate because they just won't dare stand for twenty-odd bills.  Frankly, they'd likely say it's all or none....making Boehner and Cantor mostly grin that the old guys in the Senate just weren't up to one-page bills (too much to read).

The plan to fix roads and schools?  Which ones?  Even split amongst all fifty states?  You can imagine everyone wanting a chunk of the money to do something with Route 16 highway, the old gym at the school, and replacing a 64-year old bridge considered unsafe.  The issue is that you don't have a list sitting there with projects ready to go (remember, don't utter "shovel ready" in any national audience or folks start laughing).  I'm guessing over 900 principals are pulling out their dream plans tomorrow morning and trying to convince Senator Tubby that they truly need eight million to build this great school annex building.  You figure four months to argue over this priority list of projects, another six months to get the contracts fixed up and signed, and another eighteen months before the school is finished.  There's limits to this concept.

Then I came to the end of this speech.  It felt like a political huddle with a coach giving you his strategy.  Confidence wasn't really overflowing on this matter.  It might have some effect, but not as much as you'd like.  Would it convince a company to grow it's jobs base?  No.  Would it convince a boss to hire up forty more employees?  Maybe, but the President left out the various regulations that he'd dump (momentarily). So that wasn't going to help much.
at Friday, September 09, 2011 No comments: