Ten Things About the Riots That Stand Out

1.  It's just odd.....no nutcase with a rifle has shown up to shoot riot thugs.  In the LA riots of the 1990s.....folks who owned business operations were perfectly willing to shoot people attempting to break in.  So far?  Nothing.

2.  The threat of Covid-19?  No one seems to be washing their hands or getting worried about catching it.

3.  Noticed any of the big name Democrats from the House or Senate pleading for a halt in the violence?  Yeah, that's odd.

4.  This idiot from Nashville who has been arrested for setting fire to the old city courthouse (historical building)?  My guess is that the DA will bring the punk in, with his lawyer, and lay down the charges.  In the midst of this.....if the guy were to agree to easy guilt, and agree to pay the total bill (probably over 1-million....maybe up to 3-million), he'd lessen the charges enough that the guy only got five years in prison.  The sad thing about this is that he had no respect for nothing....not for historical nature, or for the police, or law.

5.  Here we are with some mayors still more concerned about churches open....than riot business going on.

7.  This odd statistic stands out.....for every 10,000 blacks arrested for a violent crime, three are killed in the process.  For every 10,000 whites arrested for a violent crime, four are killed in the process.  Blacks will ask why, and the most logical answer is that the idiot white folks put up a bigger fight.

8.   Virtually no one talks about this counterfeit $20 bill that the dead guy had, or where he picked it up from. 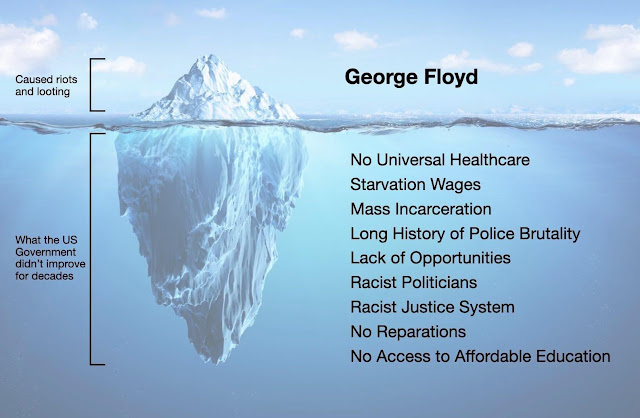 I often browse and note propaganda pieces, which stand out.  This one above stood out.

So, it tries to convey all these things that the US government failed to deliver.  The problem with this is that both Republicans AND Democrats are really in the blame side of this.

Did the government really fail?  No.  But this individual probably got a written piece from Professor 'so-and-so' and drafted it into a graphic arts project. If you were to drag this out, with a whiskey sour....you'd admire it for about sixty seconds, and then launch into a laugh.  It's the kind of material that a first-year college student would hype.

As for the questions?  The access to affordable education?  That's your high school system, and local technical college system in your state.  Reparations?  No government can piece together anything that would be agreeable.  Healthcare?  That was your Obama package from 2010.  Starvation wages?  The US is known now for the fattest kids on the globe.  Mass jail issues?  All you have to do is convince people to be law-abiding.  Police brutality?  Your local mayor and DA would responsible for that, and it appears that you are happy in voting to keep them in office.  Lack of opportunities?  Look at illegals....they are more than happy with opportunities.

Where I see this current riot agenda heading?  Near to the script of the 28 July 1932 Bonus Army Riot.  So let me lay out the whole story.

When WW I ended, the political folks (from both parties) felt that some bonus needed to be handed all the GI's who participated in the war.  However, they just didn't have the money there in 1924 to hand the GI's.

1929 and the stock market crash would come, and by the end of 1931.....a lot of hype had occurred with disgruntled GI's being told via various news outlets that something would be done to issue out the $500 to $625.  Various characters (more than 10,000) had gathered in camps on the east end of DC in the spring.  What they expected was that the Democrats would find the votes, and push back against President Hoover.

The week of 20 July 1932 came, and the Senate couldn't get the deal done.  Riots were starting up and various threats were issued.  DC had no real police to handle this.

What Hoover ended up doing was calling up General MacArthur, and a Army effort was made to push the riot folks out of town.  This 'battle' went on for several hours, with pictures taken and a lot of negativity.

Folks can discuss at length the plan by MacArthur, and the use of federal troops to end the mess, but it basically ended Hoover's chances at the election there in November.  The news media took the negative reports, and the images, and made a easy deal to sell a replacement agenda to the public.

In this case now.....I think an enormous battle plan is brewing for DC, and they hope that Trump will call for federal troops to be used.....thus repeating the 1932 scenario.
at Monday, June 01, 2020 No comments:

For the past two months, MLB (Major League Baseball) has been trying to work up an alternate season deal.  So the 'big' deal was offer roughly ten days ago by the clubs.

It would amount to a 82-game season, and a pay scale set to that (roughly half of your normal pay, since half the games are gone).

Several clubs admit it's going to be tough to profit from the season but this is the most workable deal existing.

So over the weekend, the players union came back....NO, that deal won't work.

Their alternate deal?  They want a higher percentage of the salary deal, and 114 games on the schedule.

As you gaze at the calendar....to make the 114 games work, you'd need the World Series to occur right around Thanksgiving, and probably end two or three days after turkey-day.

I just sat there and started laughing.

Temperature and weather for October was already 'crappy'.  To suggest that this would continue on into November and even be baseball happening (possibly in NY City) in the weekend after Thanksgiving?  That's a joke.

You can imagine cities like Detroit, or Denver, or Washington DC....with games in November. A light snow falling?

What'll happen?  The owners will meet and just have a good laugh and say 'no'....the season ends on schedule.

The odds of baseball not being played in 2020?  At this point, I give it a 40-percent chance that no baseball will occur, and a bunch of players will be in serious debt issues by spring of 2021.
at Monday, June 01, 2020 No comments:

Antifa and the 'Path'

So onto the topics of the day:

I think for a couple of months, since the Impeachment failed....this 'script' moved up from talking stages, to active stages.

The agenda revolves around three essential elements: (1) unite blacks around a Democratic candidate (not essentially Biden)....thus avoiding the idea of 40-percent of blacks voting for Trump. (2) Demonstrate hopelessness for blacks getting a fair deal (even if a dozen-odd George Floyd's are killed weekly in Chicago by non-police).  (3) Bring revolution 'success' back into the college scene and show 'power' to attract new kids and recruits.

At this point, it's obvious....it has to be a black female, and must be identified as a person to bring peace, tranquility and non-violence.  Basically a female Barack Obama-character.  About two weeks after the convention, Joe will admit health issues (maybe a fake heart condition, or maybe admit his dementia).  The VP will move up, and a second 'peace-maker' will be brought in.

Well....blacks were kinda shocked that these young white folks (maybe guys) showed up.....got all hyped-up and violent, and started fires.  The fact that they burned down places that were establishments in black communities?  Nope, they didn't really grasp that.

The fact that they burned black businesses?  No, they didn't grasp that.

The white 'thugs' didn't listen to black leaders, and seemed to have an agenda already in mind.

The news folks who told the story that this was peaceful-Antifa?  That worked for maybe 24 hours.....then that message didn't pass the 'smell-test'.  Even blacks started to ask stupid questions.

The news media flipping on the Antifa brand, and saying these folks aren't real Antifia....they are fake-Antifa, who seem to be led by white supremacy folks, KKK-members, Russians, and Chinese authorities.

They came out and chatted about the tens of thousands they gave to bail out the protest folks.  The problem here....if the media message is correct, they are bailing out white supremacy people and KKK-members.  So Hollywood is supporting the KKK?  Hmmm, that suggests some serious problems.

First, some journalists are going to figure into the Antifa business, and the DoJ will figure out cash 'gifts' given to them over the past couple of years.  Some brand-name news organizations will be asked about their employees and if the manaagers were aware of $10,000 gifts.  The odds that the 'gifts' were reported to the IRS?  Zero chance.....so that's going to require some tax attorney work, and fines to be issued.

Some colleges will be approached by the DoJ and asked about members of their staff.  Big name lawyers will be dragged out to defend far left professors and their 'standing' within the college will be challenged.

Hundreds of parents will get a call from 'Billy' and 'Wanda'.  They seem to be in trouble....needing $20k in lawyer help, and won't talk about what the issue is.  When it's finally laid out.....Antifa....Dad will ask what the hell they were thinking.  Some of these kids will be getting 90 days in jail (the lucky ones)....while others get several years.

Once the smoke has cleared, and business owners state their intent NOT to rebuild....a bunch of questions will rise over urbanized communities.  Blacks will suggest that allowing white thugs into the community was their mistake.  Trust in local prosecutors will drain, as the DoJ handles the majority of cases.  Some lines of support will be drawn from Antifa to local city council people.....triggering a very harsh reaction by the public.

7.  How long will the Antifa investigation continue?

Even at the end of 2021....I don't think the investigation will have wrapped up.  For some, this may still be a lawyer situation for three or more years.