No Drugs or Alcohol While Watching CNN 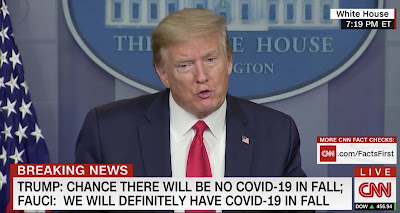 I would strongly urge people to avoid drugs or alcohol while watching CNN, because it's already fairly confusing without either of them in your system.

The best part....two minutes after this conference ended, you had five 'experts' who told you five different interpretations of what was said, and it was like each watching a bar-room fight, and each having a different view of the ending.
at Thursday, April 23, 2020 No comments:

How Socialism 'Would Really Work'

Marvin goes and gets twenty people signed up, and your organization (company) is to make candles.  Don't ask about necessity of candles, or the numbers equaling realistic profits.  This is a brief discussion on how socialism would work.

Marvin gets a 'compact' (an agreement with the twenty folks).  They approach a bank to get a start-up loan.  The bank has to avoid asking stupid questions (profitability, if any of you have ever made candles, or customer potential).  So they hand you the loan.  As stupid as Marvin might be.....the bank has to be just as stupid.

Now you start the candle business.  You have to assume, in this socialist atmosphere.....there is no competition.  If there were competition, and others were better than you....then your business would rapidly decline.  But in this socialist world....you make candles within your region (say ten miles) and no one competes against you.

Added to this....one has to assume that none of the twenty want to take charge, and that Marvin acts as the 'lead' (never use the word boss in a socialist situation).

Everyone in the group is paid the same.  The pricing of the candles?  Only what the raw materials cost, and the cost of labor.  No profit can be built into the candle business.

If anyone comes along with longer-lasting candles....to compete against you?  That's another forbidden situation.

If customers come along to refuse your candles?  Well, that can't seriously happen in a truly socialistic world.

If Marvin screwed up and needed to be let go?  Well, the system would have to prevent that....because Marvin would be out of a job and without an income.

There are a list of a hundred different 'what-if' scenarios.....where nothing can really change or improve....if you were a truly socialistic company.

So I come to the end of this discussion.  As much as some people want socialism to be the driving force in life....we've moved past the wagon-wheel state of mind, and live in a world where the candle factory concept simply won't work.  In simple terms, you'd have to go and totally re-invent socialism, with a totally different end-result, if you wanted to make it a model of operation today.
at Thursday, April 23, 2020 No comments:

Yep, he said it.  So you sit there and think about it for three minutes.  What exactly do economic rights mean?  I know.....it just wasn't plain enough for me to figure the implications here.

Maybe he does mean I should be able to buy four burgers at McDonalds for $1.99, or that a bottle of Jack Daniels should be no more than $12.  Maybe he means that everyone should be able to have a double-wide trailer for less than $300 a month.

It's just another reason why I can't see Bernie in the White House.

2.  Are there really 7,383 total legislators in America today?

Yes, but don't get worried.....they are deemed 'essential' and still collect a check each month.

3.  Did Bloomberg actually spend out over one-billion dollars.....on a one-star campaign?

Listen, some people felt that he was dressed up and gave the radiant appearance of a soon-to-be-President.  The problem was....he gave a 'wooden' performance.  He was like a three-quarter-speed Obama, or a slow-motion George Bush.

I seriously believe that the DNC players figured he'd rush in....take the load off Joe Biden, and quickly protect the whole election game (keeping Bernie Sanders out of the convention system).  They guessed seriously wrong.

The billion lost?  People will talk about this for the next decade, and suggest that the billion....in the hands of Beto or Mayor Pete.....would have turned the whole election around.

If you follow the real news and the fake news, there's a difference.  The Chinese authorities say it's fully open.  If you talk to Americans who returned to the city in the past week.....they generally say the city is about one-third open.  What they are basing this upon?  Mostly driving around and hitting places that they typically would have shopped or gotten service.

So the real question should be.....is Wuhan version 2.0 going to recover?  I would make a guess here that a fair number of people didn't see a reason to stay there, and have moved on.  I also suspect that if you actually bean-counted people over the age of sixty......probably half of that population aren't living anymore.

Does it matter?  No.  Go look at the Incas and the Aztecs....their civilizations hit some blunt situation, and folks packed up to leave.  History repeats itself.

But the convention is still like 15 weeks away?  Yes.

At the pace of declining health, I don't think Joe can last till mid-August.

6.  Three million Americans NOT pay on their mortgage presently.....isn't that going to be a problem?

Because of the crisis, you could play this game out for 90 days, but after that point, the banks would require the federal government to 'help' or you'd have a 2008 crisis all over again.  Let's be honest here.....a lot of people were surviving with a paycheck-to-paycheck situation, and there is no six-month stock of financial reserves.

If this were to be dragged out until August, I'd suggest we enter another crisis period....just on bank problems alone.

7.  Did the governor of Virginia pack up some bags and go off to his vacation home on the Outer Banks (North Carolina)?

No.  Well....he says the social media chatter is incorrect and that he didn't leave his state of Virginia.  The suggestion that people have 'seen' him at the home?  I might suspect it's one of his friends using the home.  At this point, having issued executive orders for Virginians to remain at home.....if he'd done something this stupid, he'd be out of a job.

8.  Is there factual data to suggest sunshine matters with the virus?

Well....some scientists have done the numbers.  Sunshine states/countries (I'm assuming they mean like New Mexico/Arizona/Jordan/Egypt) have a lesser virus situation.  Course, that would mean places like the UK and Italy would be at the opposite end of this, and bound to suffer more.

9.  Did 'thugs' try to burn down a police station in Strausbourg, France?

Pretty unique situation.  So what the national French news says is that a Molovtov cocktail or two was thrown at the front of the building, and some minor flame did occur.  Damage?  Virtually nothing much except some broken glass and burn 'marks' on the structure.

Local chatter on it?  This area of town, Meinau, is the location of a number of high-rise cheapo apartments.  Wild behavior isn't something that is unusual in this neighborhood.  With warm weather and tensions on the rise because of the ban rules....chaos is on the rise, and the cops are in the middle of this.

10.  This $1-billion deal between California and China for masks.....is there a problem over this deal?

Well, you don't know.  It probably should have been a open-competition situation, but the governor won't release the contract and details.....so immediately, you are drawn to wonder about the insider information.  Just on transparency.....you'd give the guy a 'F'.