While I was off in Australia on my vacation....I read through daily papers, and one afternoon.....there was this one article.  It was a woeful tale of a town....along the eastern side of the country....of roughly six-thousand people in the local region.

Their one and only doctor was coming up for retirement and they wanted to hire up a replacement.  So for over a year now.....they've searched for a doctor.  They've used a HR service and advertised far and wide.  So far.....no takers.

The hindering to recruitment?  It's a rural area....far from any major city like Melbourne or Sydney.  When we say 6,000 residents.....that kinda includes the wider community....anyone within an hours drive.

The retiring doctor likely stays around another year or two, while they continue this search.  The sad thing is that you'd find yourself in a quiet community without a lot of normal things you'd expect to find in a big town like Brisbane.  The $370,000 would be taxed and you'd probably see a good quarter of it gone for taxes.  You'd think.....someone would want the quiet atmosphere.....low stress....and lack of urban life.
at Monday, February 29, 2016 No comments:

Law and Order in Hong Kong 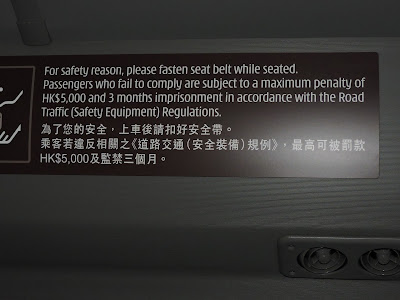 I spent four days in Hong Kong.  There are thousand little comments to make, but I'll center this short essay upon two things and law enforcement.

This sign kinda notes the direct impact of NOT using seat belts....caught?  Five thousand Hong Kong dollars and 90 days in jail.  You see.....they don't kid around about the law....no second chances....no weasel for a judge....just plain regular enforcement.  If you need to spend 90 days in jail to reestablish your understanding of the law.....go for it.

So, this played out on the second day there.....where I was on a street and just standing there when a van was backing into a parking spot, and a taxi ran into the back (bumping the van ever so slightly).

The van (in front and backing) jumped out and was about to launch into a five-star confrontation.  But at the same time.....there were these two cops (male and female officers).....about forty feet away and had observed part of the incident.

The female officer went straight up to the van guy who was angry and stood five feet away.....then raised her hand in a manner to send a strict message to the guy.  No confrontation.....no other words.....if you do anything to challenge me.....it'll go hard against you.

I turned and watched the male officer facing the taxi guy who was angry and was going to exit the cab to toss in his two cents of confrontation......and the hand signal went into action there.

It was absolute authority by the cops, and absolute fear of what the cops would say or do in court.  In the US, you would have had to call for back-up cops (maybe 20 of them) and worry about people in the crowd getting into some massive riot.  Here in Hong Kong?  The cops owned the peace and you just didn't do anything to send them the wrong message.

Frankly, I was impressed.

The taxi guy drove off.  The van guy proceeded to back in.  The two cops continued their walk on down the street.  It's the way things ought to work.
at Monday, February 29, 2016 No comments: 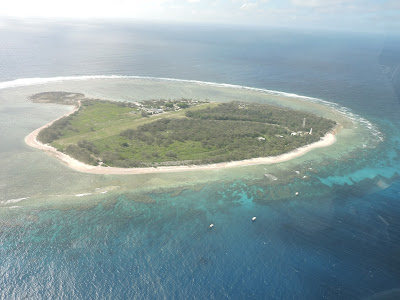 About forty miles off the eastern coast of Australia (north of Brisbane) is Lady Elliot Island.  As one day of my entire trip....I ended up on a 10-passenger Cessena and flew into the island.

First, its safe to say that it is one of those unique things that you probably will question.  I looked at the runway as we circled on approach, and kinda questioned the length.  The island is roughly a hundred acres, and I'd take a guess that the runway was no more than 2,000 feet long.  You could feel a good hard braking effort once the wheels touched the ground.  Then I kinda noted that it was all grass and a fairly bumpy landing.

The guy lets you know right off the bat that there are no snakes on the island....but ten thousand birds.

With the package deal.....you get roughly six hours on the island.  If you wanted to stay at the resort overnight....you could.  But then you'd be living life on the high-end.

You are at the edge of the Great Barrier Reef.  Turtles, sharks, etc.

If you were looking for a permanent structure on the island.....the only thing of a brick nature is the lighthouse.  Otherwise.....everything else is wood or aluminium.

Lunch?  The resort guys run a decent service and at least offer a better than average deal.

After a while, you just start viewing this as a Gilligan's Island type situation.  If I had to spend months on such an island.....I'd go nuts.  Between the bird noise and constant waves hitting shore....it'd drive me crazy.

So, if you were in Brisbane and wanted to do something unique.....I'd suggest the tour.  It is an eleven hour total package deal.....from your hotel to the island and back, and likely gives you one of those rare moments in life to ponder upon remote places.
at Monday, February 29, 2016 No comments:

Over the weekend, I finally returned from a long extended flight from Sydney.  I looked at US news, and there's this piece from US Senator....Chuck Schumer....from New York.

The Senator wants the FAA to establish seat-size standards for commercial airlines.  Chief reason?  He says they (the airlines) have been cutting down on leg and seat width for years.....it's time to reverse the trend.

Back in the 1970s.....you had 35 inches of room....from the pitch to the next seat.  Today?  It's closer to 31 inches with most airlines.  The seat width used to be 18.5 inches but with most airlines....it's 16.5 inches now.  There's even some talk that they want to advertise certain seats as wider but charge more for the benefit.

From this trip, I was lucky.....I rode business class and for the first time in my life....had ample room.
Back around 2011....I had the privilege of riding US Air from the Philly to Frankfurt....and rode eight-plus hours in one of this 16.5 inch seats and 31 inches of leg room.  It was without any doubt....one of the worst flights in my life and toward the sixth hour....I actually got up and stood near the bathroom for almost forty minutes before being chased off by the Stewardess.

The thing is....if these flights were all just 90 minutes in length, then we wouldn't be discussing this.  The minute that you start talking about three hours of sitting and no real leg room....it's more of a torture to travel.

A couple of years ago, I was reading on a Japanese plan to make people stand for all flights of 90 minutes or less.  You'd be leaning and buckled into some standing and leaning seat.  The guy designing this figured that you could cram 400 people onto a plane that typically carried 180 passengers....if they were all standing.  The swap here was that you'd pay probably half the amount of money for such a trip.  I kinda questioned this but it is true....we'd all like a $45 one-way ticket from Atlanta to Orlando and be willing to stand as part of the deal.

Mandating this through Congress?  It's hard to imagine how you'd sit and trust these guys to fix this problem and not screw it up.  In the end.....they might mandate something enough.....to trigger prices going up by forty-percent and you just getting one inch more of legroom.

Do we really need the House and Senate working on things like this?  This is one of the sad parts to our democracy.....where everything becomes political in the end.  A Republican agenda against this?  More than likely.

The best seating arrangement in my life?  I hate to admit it.....but when the Air Force tagged me to ride in the cargo planes and you rode in the web-seats.....you had tons of leg room and it was the best seat possible for eight hours of flight.  Course, you had to accept the five-star box lunch from the Air Force as part of the deal.
at Monday, February 29, 2016 No comments: