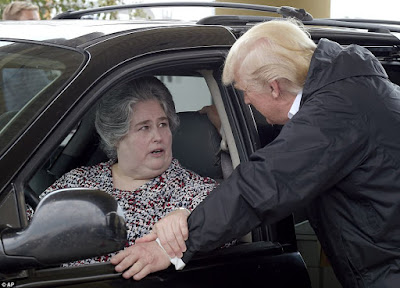 I sat and looked at this picture (from the AP folks) off Drudge this morning.  President flew down again and had a half-day of activities in Houston again.

In this scene....the older gal had pulled up and President Trump walked up and had a brief chat with the older Houston gal.  As you notice the moment...she has embraced the President with her hand on his left arm....a sign of connection.

I paused over the moment.  She likely left that epic meeting between herself and President....teary-eyed and emotional.  She probably drove back home and talked to her husband 'Lester'....noting how she'd bumped into Trump.  'Lester' probably asked if it affected her, and she probably went on for two hours talking of this one brief moment of dialog with Trump.  Eye-to-eye....chatter over the weather, the flood, the compassion of people....Trump giving her a chance to say something that was bothering her, and for a brief time....she felt up-lifted.

Maybe she did admit that she voted for Hillary.  Maybe she even suggested that she had voted for that McMuffin-guy.  Or maybe she admitted that she'd forgotten about voting that day in November.

Here's the thing....on any given day, you might take a turn and stop in some parking lot....and President Trump might suddenly walk up to your car-window and want to start a chat.  Don't goof this up.  Offer up a 'howdy'....speak with some respect....and say your brief sixty-word commentary.  This is it, your one brief moment in life when you might be able to influence or bring some insight to a situation.  Don't screw it up by admitting you voted McMuffin.
at Sunday, September 03, 2017 No comments:

When you go digging through history....you can find orchestrated fake episodes which the news media helped to funnel to the public, and shape public opinion to a particular conclusion.  So there's the bonus-Army episode of 1932....which I will explain in detail.

For decades in American history, it was common to offer up a bonus to people who would sign to help fight in some American war.  Typically, you got land or property, for a set period of time. By the end of the Civil War, it was becoming apparent that there was a limit on open land left and this idea of land-grants for military service....had to come to an end.  In the case of the Spanish-American War....luckily, it only last about one-hundred days and no incentive was required.

However, as you come to WW I....we had a slightly different case building up.  In this episode....the entry of the US didn't occur until early 1917 (note, after the November 1916 election, where President Wilson campaigned to stay out of the war)....that the US entered the brief war, and spent barely eighteen months in the engagement.

A bonus deal?  It's an odd thing....the war actually ended and folks went home.  Wilson's term would end in early 1920, with President Coolidge entering office.  Four years go by....a GOP-led Senate (figure near 60 Republicans, with a majority)....set up legislative matters to hand out a Army-bonus for WW I (having ended five years prior).

All of this comes up early in 1924, and is passed by the House and Senate.  Coolidge?  He vetoes the bill....but the vote comes up in the Senate and they overturn his veto.  Imagine that.

The deal?  Well....every guy who spent time in service for the war received a dollar for each day of service, with a limit of $500 maximum.  If you did overseas service (actually in France), then you got $1.25 for each day....but there was a $625 limit on that.  Amazingly enough....anyone who had very limited time and had fifty dollars or less owed....they got paid immediately.  Everyone else?  They got this certificate which they could hold and would be paid out in twenty years....1944.  In truth....the government had some money sitting there and could afford the group owed the $50 or less.  The rest?  They simply didn't have the money, and this was a debt that would be invented out of thin air in 1944.

There were a minimum of three million certificates created for this, and the debt listed was between three and four billion dollars.  If you did this by 2017 numbers....it was roughly fifty-billion dollars to be paid out.

No one says much between 1924 and 1929 over the deal.  But you have this odd episode of the Wall Street crash, and depression setting in.

So around by 1930, there some hyped-up nature over the bonus deal.  Some folks want the bonus open to a loan out....so you could walk in and get a partial payment (a loan).  This starts out at the twenty-percent level, and later....there's talk of a fifty-percent loan-out.  It goes nowhere.  Why?  The House and Senate sit there....in the midst of a depression....talking about finding money which doesn't exist, and suggesting higher taxes to pay out the bonus money.  No one wants higher taxes.

By January of 1932 (an election year), there are marches conducted on Washington by disgruntled former Army members.  Protests are set up in Washington DC....with approximately 25,000 folks there in the spring period....coming and going. By July, it's suggested that ten-thousand protesters are now in a camp atmosphere (intending to stay long-term).

As July arrives....the political atmosphere in DC is charged up.  Protests are common.  Some people think that anarchy could be on the verge of occurring.  So President Hoover (the GOP guy) orders the Defense Department to take action.  Note, there's virtually no real cop presence in the city to handle this type of mess.

On 28 July 1932....a brief one-day episode unfolds.  US Army versus ten-thousand former Army members....on the far east side of Washington DC.  The print-media at the time lays out the whole episode, and a massive amount of blame gets dumped on President Hoover for the way that this was handled.  Four months later, the election shift has occurred....one of the worst election defeats for a sitting President occurs....all going back to the Bonus-Army riot.

Oddly enough....in 1936...the topic of the bonus money came up through Congress again....passing through both House and Senate, with FDR vetoing the pay-out.  This time?  They voted again and overrode the veto....paying out roughly 2-billion dollars of bonus money.  Taxes?  No one says much....it was simply debt added to more debt and everyone looked the other way.  Who passed the bill?  It was a massive Democratic House and Senate that had taken over in 1932 and 1934.

One can look back at 1924 and how a bunch of politicians screwed up....how Hoover screwed up with the handling of the protesters....and how the Democrats made everyone happy in 1936 over the bonus...all neatly created or orchestrated.
at Sunday, September 03, 2017 No comments: