I don't normally lay out obituaries in my blog.  However, there's this one obit which got published in the last week, and it's been on my mind.  This old guy has passed on, and his daughter sat down and write up a personalize obit.

Normally, obituary writings are pretty serious and lay out a long life.  No one ever says what's on their mind....but in this case....she pretty cleared the deck and wrote the best obit that I've ever seen.  I frankly admit.....I would have liked to have met the guy.  He is likely a one of a kind individual.

Harry was locally sourcing his food years before chefs in California starting using cilantro and arugula (both of which he hated). For his signature bacon and tomato sandwich, he procured 100% all white Bunny Bread from Georgia, Blue Plate mayonnaise from New Orleans, Sauer's black pepper from Virginia, home grown tomatoes from outside Oxford, and Tennessee's Benton bacon from his bacon-of-the-month subscription. As a point of pride, he purported to remember every meal he had eaten in his 80 years of life.

The women in his life were numerous. He particularly fancied smart women. He loved his mom Wilma Hartzog (deceased), who with the help of her sisters and cousins in New Hebron reared Harry after his father Walter's death when Harry was 12. He worshipped his older sister Lynn Stamps Garner (deceased), a character in her own right, and her daughter Lynda Lightsey of Hattiesburg. He married his main squeeze Ann Moore, a home economics teacher, almost 50 years ago, with whom they had two girls Amanda Lewis of Dallas, and Alison of Starkville. He taught them to fish, to select a quality hammer, to love nature, and to just be thankful. He took great pride in stocking their tool boxes. One of his regrets was not seeing his girl, Hillary Clinton, elected President.

He excelled at growing camellias, rebuilding houses after hurricanes, rocking, eradicating mole crickets from his front yard, composting pine needles, living within his means, outsmarting squirrels, never losing a game of competitive sickness, and reading any history book he could get his hands on. He loved to use his oversized "old man" remote control, which thankfully survived Hurricane Katrina, to flip between watching The Barefoot Contessa and anything on The History Channel. He took extreme pride in his two grandchildren Harper Lewis (8) and William Stamps Lewis (6) of Dallas for whom he would crow like a rooster on their phone calls. As a former government and sociology professor for Gulf Coast Community College, Harry was thoroughly interested in politics and religion and enjoyed watching politicians act like preachers and preachers act like politicians. He was fond of saying a phrase he coined "I am not running for political office or trying to get married" when he was "speaking the truth." He also took pride in his service during the Korean conflict, serving the rank of corporal--just like Napolean, as he would say.

Harry took fashion cues from no one. His signature every day look was all his: a plain pocketed T-shirt designed by the fashion house Fruit of the Loom, his black-label elastic waist shorts worn above the navel and sold exclusively at the Sam's on Highway 49, and a pair of old school Wallabees (who can even remember where he got those?) that were always paired with a grass-stained MSU baseball cap.

Harry traveled extensively. He only stayed in the finest quality AAA-rated campgrounds, his favorite being Indian Creek outside Cherokee, North Carolina. He always spent the extra money to upgrade to a creek view for his tent. Many years later he purchased a used pop-up camper for his family to travel in style, which spoiled his daughters for life.

He despised phonies, his 1969 Volvo (which he also loved), know-it-all Yankees, Southerners who used the words "veranda" and "porte cochere" to put on airs, eating grape leaves, Law and Order (all franchises), cats, and Martha Stewart. In reverse order. He particularly hated Day Light Saving Time, which he referred to as The Devil's Time. It is not lost on his family that he died the very day that he would have had to spring his clock forward. This can only be viewed as his final protest.

Because of his irrational fear that his family would throw him a golf-themed funeral despite his hatred for the sport, his family will hold a private, family only service free of any type of "theme." Visitation will be held at Bradford-O'Keefe Funeral Home, 15th Street, Gulfport on Monday, March 11, 2013 from 6-8 p.m.

In lieu of flowers, the family asks that you make a donation to Mississippi Gulf Coast Community College (Jeff Davis Campus) for their library. Harry retired as Dean there and was very proud of his friends and the faculty. He taught thousands and thousands of Mississippians during his life. The family would also like to thank the Gulfport Railroad Center dialysis staff who took great care of him and his caretaker Jameka Stribling.

Finally, the family asks that in honor of Harry that you write your Congressman and ask for the repeal of Day Light Saving Time. Harry wanted everyone to get back on the Lord's Time.
at Thursday, March 14, 2013 No comments:

It's not worth much to talk about unless of course....you are a Bama NCAA die-hard enthusiast.  But today, the judge handling the Harvey Updyke case....decided that folks around Auburn University and the town of Opelika, Bama....are just too judgmental on Harvey, and ordered the court episode to be moved.

Who is Harvey?  Well....he's a die-hard University of Alabama football fan, and he decided to lay out some poison down on some sacred oak trees at the Auburn University...near the stadium in the fall of 2010.  Yeah, the oak trees died off.  If Harvey had just kept his mouth shut....he would have been OK   But he wanted to admit all of this on a sports radio talk show....in Bama.

Naturally, things went down hill from that point on....with the cops involved.

We've pretty much burned through two years of court action so far.  At one point, a judge wanted a mental test of Harvey....to make sure he was just Bama-crazy, and not real crazy.

Then there's been various scientists and tree experts to dig and note hundreds of pages of analysis over the dead or dying oak trees.  I imagine an entire volume of books could be written over what they found or didn't find. 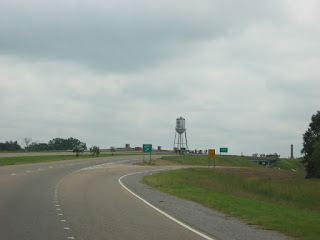 The local cops of Opelika launched an investigation.

Some local folks are now thinking the poison might have seeped into local city drinking water, and this is making analysis more detailed and might force folks to drink bottled water (something that Bama folks cannot imagine).

Harvey?  Well....the curious thing is that he's a retired Texas law-enforcement officer, and not even a pure Bama resident.

The new court location?  Well....the judge did an awful lot of checking and asking around, and finally decided that the folks up in Wetumpka, Bama.....just a bit north of Montgomery....are pure, honest, and probably only ninety percent obsessed with NCAA football.

I'm guessing the proud folks of Wetumpka are a bit dazed right now.  They'd never imagine a character like Harvey being charged and tried in Wetumpka.  They probably will have ESPN, CNN, Fox News, and even 60 Minutes come to analyze Harvey and the court case.

Will Harvey's case spoil Wetumpka?  Well....yeah, that probably will happen.  The jury members chosen for this will be legendary in the state of Bama....for an eternity.  Interviews will be made, and analysis will be discussed over at the Chicken Shack and Shoneys Bigboy.

The weight of Harvey's life hangs in the balance.  Based on legal comments....most folks think Harvey could get up to ten years of prison time.  Prison life might settle down Harvey's NCAA feelings.  You don't typically get to watch too many games, and you can't tell....most guys in Bama prisons might be more Auburn, than University of Alabama.  Well....you just don't know.  It'd be a bad spot to be mixed up in a state prison, with a bunch of Auburn fans.

How much has been spent on Harvey by Auburn and the law enforcement community?  I'm betting we've gone past the two million dollar point.  With the Wetumpka affair (sounds like a Cold War movie, if you think about it).....this will get up to four million by the end.

Could the Wetumpka folks find Harvey innocent?  Only by insanity....I think.  And the question is....is Harvey Bama-crazy or real-crazy?  Only a Wetumpka jury can reach a verdict like that.

So tonight....out across Wetumpka....there's twelve folks who are quietly sleeping, and in the coming weeks....they will be thrust into the biggest adventure of their lives.  This is the stuff movies are made about.  Life....will never be the same.  Heck, Brad Pitt and Terry Bradshaw might star in the future movie.

Oh, and I should add....this event will be second only in Wetumpka....to the meteor hit back eighty-three million years ago.
at Thursday, March 14, 2013 1 comment: