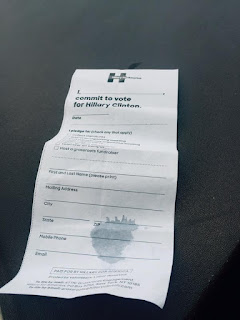 A journalist (Salena Zito of the Pittsburgh Tribune-Review) showed up at the Hillary Clinton speech in Cleveland.....but to be given access to the event....she had to sign a loyalty oath (as were the hundreds of others who wanted entry).

Well....it's an odd deal.  You just say that you are committed to Hillary....offer up some help like a backyard bar-b-q or coffee meeting with other concerned Hillary folks, and then hand this into the team that runs her campaign.

Might someone lie on the loyalty oath?  Well......yeah.  That's one of the dozen-odd problems with such oaths.

You can always dump your loyalty.....in fact, from day to day or hour to hour.

A comical political theme?  Well, if you get desperate enough....you might turn to the idea of a oath.
at Tuesday, September 08, 2015 No comments: