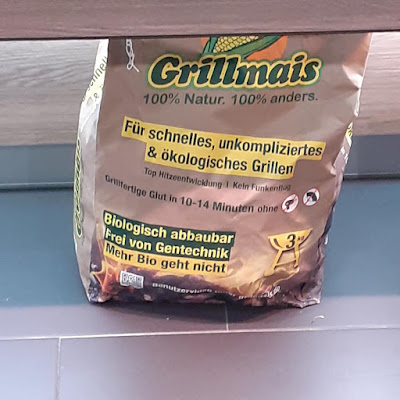 I was at a German grocery this week, and this odd bag of charcoal sat there.

So the deal?  Corn cobs.  A good burn?  I paused and just wondered over this.  Normally, it simply isn't what you'd go and put on a grill for steaks.  It is natural and bio....I would assume.

This morning, I sat and watched a press conference with Trump....which had guests who were not in social distancing.  Yes, it was obvious....even watching the piece that Covid rules were not practiced.

So the news people were there and got a chance to throw questions at Trump.

Then it came, with the one journalist asking...."Just in this room, you have dozens of people who are not following the guidelines."

Trump says: "It's a peaceful protest."

Yep, he's figured out every single angle to the news 'game' and it's just 3rd grade math to him.

And for the anti-Trump folks, their hopes are bundled up into Joe Biden somehow delivering an near impossible task.
at Saturday, August 08, 2020 No comments:

"Once this pandemic is over, we can’t go back to the way things were.

We need to #BuildBackBetter.

@JoeBiden has a plan to do that. He’ll revitalize American manufacturing and create millions of good-paying jobs, ensuring the future is made in America—by all of America."

I sat and read her comment.  Basically, it reads like MAGA (Make America Great Again).  We know that this is not possible, because this was Trump's vision and plan.

The worry here by the Democratic Party?  With all the Covid-19 business....there has to be some conclusion, and people put back to work.
at Saturday, August 08, 2020 No comments:

As each week went by, you'd come to notice little things about economics, balancing budgets, frugal ways, and disciplined spending.

His wife had him on a simple $10 a week budget...enough to buy a daily paper, a cup of coffee, and on rare occasions a soda (it had to be via our cheapo snacko fund...the 40-cent Coke from the Commissary).

His wife drove him to work, and dropped him off.

Nothing was ever dry-cleaned except his combo-one jacket and slacks.  Everything else....the wife washed and pressed for him.

Each morning, she prepared a lunch-bag....some fruit, a cup of noodles, and occasionally some Taiwanese sweet bread treat.

The family car had been a careful decision.....something without maintenance issues and had to have good gas mileage.

Any purchase situation requiring more than $100 had to be met upon by the two and mutually agreed upon.  Either could veto the purchase.

After about six months of this....I sat one afternoon and had a 45-minute chat about this lifestyle.  He pointed out....his parents did the same logical sense of economics.  He was 'blessed' as a kid.....getting all of these important lessons.  Via the Air Force college program, he'd spent very little of his parents money on college.  He'd gone to a respectful university but nothing outrageous on cost.

All of this was built into his thinking process.  He was geared to get ahead.....as was his wife.  I asked if it was possible for a Taiwanese guy to have a high-maintenance wife, and he just started laughing.....for him, this meant the wife buying a single pair of $100 Nike jogging shoes, which was something that she'd never do.

These are people who'd never waste $200 on a tattoo, $40k on an expensive car, or go on a luxury week-long tour of NY City.  These are also people who'd never spend $300 on a weekend binge of cocaine, throw out $12k on a bass-boat, spend $150 on a hooker, or spend more than $10 on a baseball game entry ticket (taking their own popcorn along to snack on).

A couple of years later, I came across a South Korean-American, and it was basically the same way.  He'd admit that once a month he'd buy a $3 lotto card....which he never told the wife about (she'd freak out over that habit).

There is something here that we all might want to learn about, and educate ourselves upon.
at Thursday, August 06, 2020 No comments: 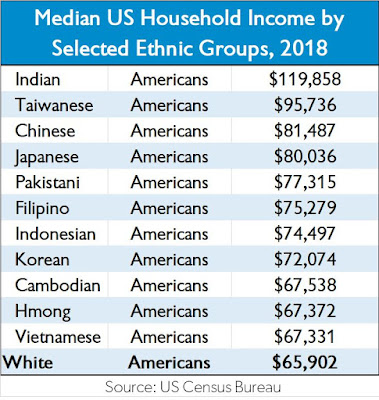 Being an average white American....really doesn't get you ahead.  And for blacks trying to make a point....all of these Asian and Indian groups have something going for them.

Even Filipino folks make more in terms of a household income.  It begs questions.
at Thursday, August 06, 2020 No comments:

I noticed this in the news this morning....via the Washington Examiner.

Most developed countries in the world....DON'T approve of mail-in ballots. Most European countries ban it (unless you are based or stationed outside of the border).

How bungled-up will this become?  After the smoke clears (in the spring of 2021), I suspect a House/Senate effort will occur where a dozen voting problems will be corrected.

Absentee ballots?  Tighten to the extreme.  If you are overseas, as military, you might still get the system to work.

National ID card started?  I would imagine the odds are now above 50-percent that it'll occur before the 2022 election.
at Thursday, August 06, 2020 No comments:

My five likely scenarios:
1.  Joe Biden has a fake heart-attack or admits dementia issues by 3rd week of August, and VP takes over.  I've believed in this scenario for four months now.  Joe's reality world has probably shrunk by 25-percent since January.
2.  The mail-in-ballot episode becomes so screwed up....that in ten states....they cannot conclude the count by the Electoral College deadline....meaning those votes don't count from the ten states.  This triggers the House to attempt to meet in mid-January....only to discover that 30 to 50 of the House members have still not been proclaimed victors yet (most being Republican).
3.  The first debate goes so badly for Joe Biden, that the rest are cancelled and around 20-percent of Democrats openly blame the DNC for allowing this 'game' to reach this level and put them into a laughable election cycle.
4.  California, Oregon, Washington and Nevada (in early December) go off to suggest that you can't have the EC count or the House 'back-up' method, until all votes are counted....suggesting that it may take three months to reach a conclusion (suggesting late March before the counts can be counted).  The four states talking about succeeding from the Union unless they are 'respected'.
5.  Finally, I have this scenario where new incoming House members (in early January) from the Democratic Party....refuse to participate and stall the House 'back-up' method, attempting to use the Supreme Court as a vehicle to prevent any election of the President.
If you thought things were screwed up presently.....just wait.
at Tuesday, August 04, 2020 No comments: