The Illusion of Free Will 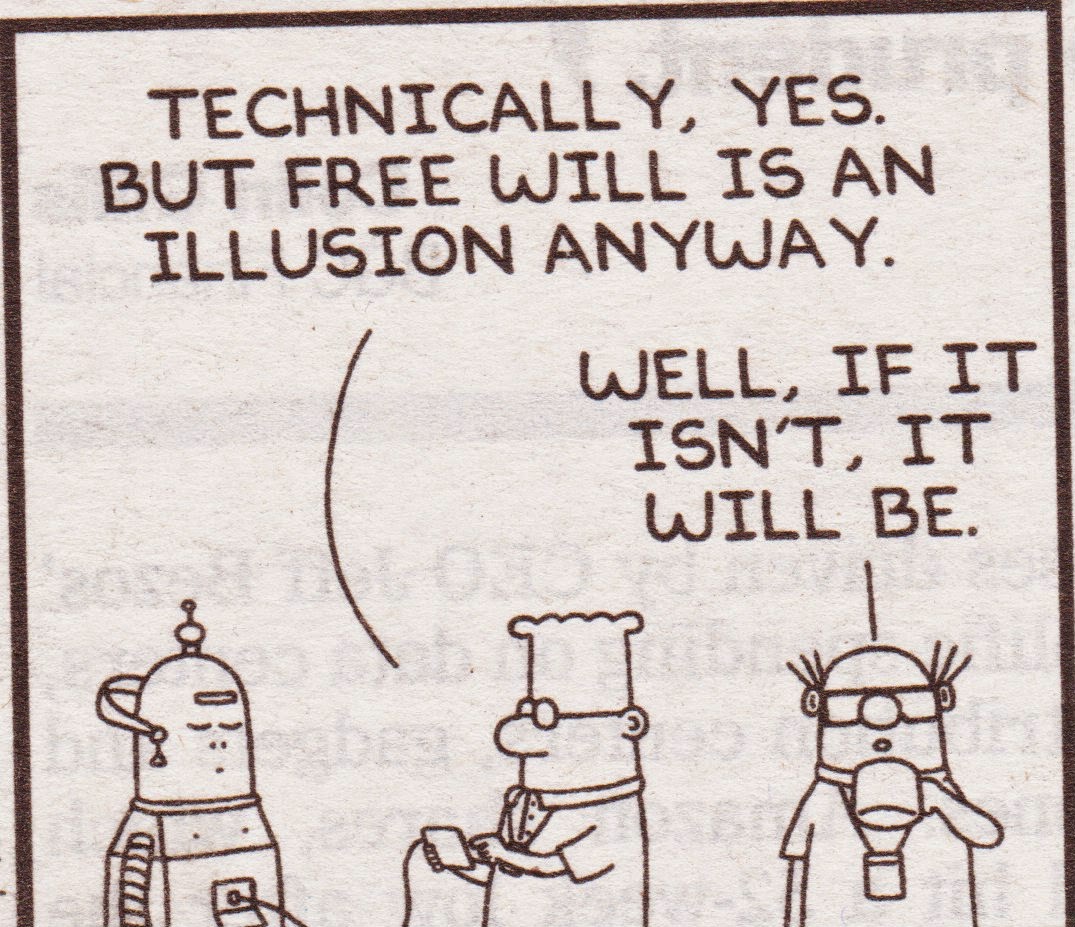 Sometimes, a cartoon sticks out in my mind.  Yesterday, I came across a single Delbert piece..."free will is an illusion anyway", and the response was correct ("Well, if it isn't, it will be").

I took a number of college classes which I basically regard as worthless.  The Air Force paid for them and they were all regarded as part of the path toward some degree, which I'd say today was worthless as well.  There were three or four classes which I note as thoughtful, demanding an open prospective of life, and probably made me a better person in life.

We opened the evening with a mathematical type situation....where you basically had one's and zero's.  One meant logical, and zero meant illogical.  After two hours of class, I walked out....amazed by the simple introduction of logic.  I admit his English in turbo-Italian-accent was awful....but he simply got the point across.

To be kinda honest....over the next ten-odd weeks....we'd have class and it was more of a discussion over what could be logical and what would be illogical.  No exams....no tests......no real homework.  Just some guy talking at length over situations in life.  One of the scenarios one evening got around to free well.  Numerous examples were put up where logic would dictate that choices were always an element of free well.  As long as you had choices....you believed in the statement of a free-will situation.  If you only had one choice.....logic would kick in and you'd assume no free-will.  Then he injected as we came to the close of the evening....what if you simply perceived choices existing but they weren't really there, and thus inviting the question....would there still be free-will?

Logic would kick in.  But he simply ended the class on that question.

Remarkably....the entire semester of introduction to logic via this community college professor....with no test, no exam and no homework. Full credit, just for showing up.  But this was one of the few classes that made you sit and ponder over statements.

With the cartoon shown above, the statement is correct.  Free will is an illusion.  As long as you believe it.....you will continue on your merry way and never question things.  Once the illusion is demonstrated.....your trust in free existing will always be dragged up and you will remain skeptical of things for the remainder of your life.  That's the logical step which you can't avoid.

Sadly, the skeptics group grows every year.
at Thursday, February 05, 2015 No comments: