My Idea for a Fake Reality Show

I am an admirer of Amish Mafia.  Yes, I admit it.

So here's my new idea for a fake reality show.  It's called Russian Collusion.

What you do is have six to eight comedians dressed up as Russians....either as KGB guys, billionaires, Russian mafia, or Russian generals.

As each episode concludes, you have a guy in the background stand and ask.....now, was this collusion, and if so....who should be tried on charges?  Along about episode three, you introduce Chinese, Canadian, Cuban, and French Collusionists.

Eventually, you even start to bring in Amish Colusionists, and ask if what they are doing....is really collusion.
at Monday, March 25, 2019 No comments:

The comical side of this whole Mueller report?

Well....it's not really remembered by many, but back in April of 2018....the New York Times and Washington Post both won Pulitzer Prizes.  The reason?  Well....Russian collusion.

The Pulitzer folks?  As best as one can figure, they wiped tears from their eyes over all the fine material that the Times and WaPo folks wrote, and just wanted everyone to know of such fine journalism.

So roughly a year passed, and what we can say today....there was no Russian collusion.  All that hype by the WaPo and Times?  Just a lot of speculation over nothing.

Embarrassing?  Yes....it ought to be fairly embarrassing to the Pulitzer folks.  Will they admit it?  No.

So this brings me around to the whole journalism business, and if it's all faked-up, biased, or fraudulent.  For two years, CNN has probably run at least 300 hours of prime-time chatter on Russian collusion.  All of that effort...sometimes involving thousands of man-hours to set up the video, and the experts to chat on Russian collusion....led to what?  A fake story-line?

Something is wrong here, but I doubt if we really want to discuss this in public.
at Monday, March 25, 2019 No comments: 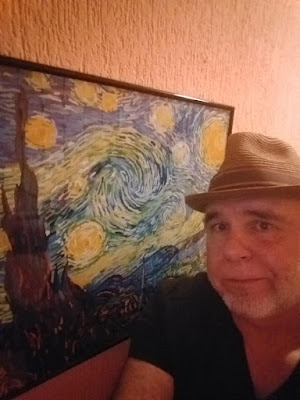 So this year, in the midst of a harsh winter period, I got bored and ordered up what you'd call an adult-paint-by-the-numbers 'kit'....Van Gogh's Starry Night.

My original thought was I'd work on this an hour each day and it'd be finished up in two to three weeks.

The original piece by Van Gogh?  Most folks 'think' (there is no factual evidence)....that he did this in two days flat (figure six to eight hours per day).

So this project went on for probably four months.  Yes, it was a bit more than what I anticipated.

How Van Gogh did this in two days flat?  I've come to question this.  Personally, with the wavy structure, thirty-six different colors, and pencil-lead markings....the guy had to be a nutcase or doped up on some good drugs.

At the conclusion of this, I kinda admired it but admit that for any future winter period.....bird-houses or dog-houses would be a much better project.  If you do have some retired husband, that you need to keep busy....the adult Van Gogh paintings (with the 36 colors) are the best way to go.
at Monday, March 25, 2019 No comments:

The Emerson polling folks went up to Iowa and talked around with locals.  The Iowa view of Democrats for President?

Joe Biden comes out on top with 25 percent.  He's followed closed by Sanders with 24 percent.

Harris?  Way back at 10 percent, and Warren at the end with 9 percent.

It's really shaping up to a two-man race (if Biden enters, which is still a big question).
at Monday, March 25, 2019 No comments: