The Dismal Awe We Have 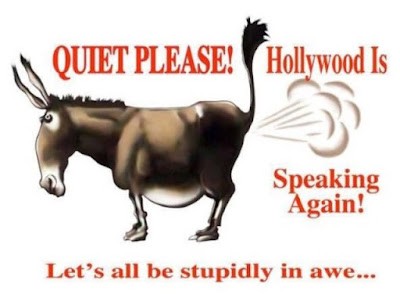 Generally, if you want some kind of insight into farming, you go to one of two people.....a farmer or a Farm Ag-Agent.

Generally, if you want some insight on illicit drugs, you go to a dope-dealer or a licensed doctor.

Generally, if you want some information or insight on transmissions, you go to a mechanic.

Generally, if you want insight on women, you go to a honky tonk bartender, or someone who has been married five or more times.

So I don't have much in a positive way to say when I stand there and have to listen to some Hollywood idiot talk about anything other than their recent movie, or the renovation of their Hollywood mansion.  Their insight on the environment, politics, the economy, or jungles collapsing in Peru...isn't of any value to me.

To be honest, I don't remember this being a big deal in the 1970s or 1980s.  It just seems like some 'creatures' wandered out of the woods in the 1990s....got all hyped-up and then convinced the public that their opinion mattered.

Presently?  I've reached the stage where the 'mute-button' seems to be helping me with this insight problem.  I wish some Hollywood dimwit would come out and talk more about the mute-button, and convince people to use it more often.
at Wednesday, April 15, 2020 No comments:

Just me saying this, but I think most business operations will be open in the next two to three weeks, and the stock market will settle.  At the 100-day point, you might be near $94,000 of value, and slide through the rest of the year near that....with dividends coming in.

Here's the thing, under a poor President, with high negativity by the news people....your situation would be twice as bad, and it'd be three years before you even got back to the $90,000 level.  The bad news here is that your 401k plan did take a hit, and it's part of the long-term goal to just keep playing.

2.  Will this idiot governor for Michigan get 'recalled'?

Yeah....it's a pretty sure bet at this point.

3.  Whats with all this ID chatter?

Some idiot wants to believe that people (they never specify who or where they are) don't have an ID.

So you go to the belly of the 'beast' (Birmingham) and wander around....to find around 400 folks there who are mostly homeless and frankly don't need an ID.  Throughout the rest of the state?  Maybe 1,600 more folks.

The bulk of the state....99.9-percent of people, probably have a ID of some type.  If you wanted to make this interesting, for folks who don't have a license.....offer up a free state ID, and then offer folks a $10 Bar-B-Q coupon as a free part of the deal.

Yeah, this is mostly all BS chatter to say folks don't have an ID.

4.  Any truth that fresh air and natural light stall the virus?

Well.....there's this study done.  They say if you have air flow through a room (like your windows open) and natural light (not bulbs)....it matters.

Now, all of these farmers will tell you the same 'wisdom' and say that's been known for over 200 years.

5.  Are voters getting all chatty about a President who feels their 'pain'?

Sit and pause over this.....you can ask a hundred folks about their 'pain' and get 100 responses.

Some will tell you it's intensely private....thinking you are talking over their hemorrhoid problem, or the spanking they took from the next-door neighbor lady.

Some will tell you it's being handled by a fancy psychological doctor, and mostly dealing with stress or depression.  Their wife ran off, or their dog died recently.

Some will confess through four beers about their 'pains' and you will eventually wish you hadn't asked.

Then finally, you might find five guys who just wish the President could feel their 'pain', but they think he's too involved with lusty stuff with the wife, or he just can't understand problems like Hillary could have.

Yeah, when some dimwit reporter talks like this 'pain' thing....he's mostly on a BS topic.

6.  Can most Americans spell Hydroxychloroquine?

7.  Do you ever get fed up with the reporters at the White House Press Conference?

No, but I wish that Trump had a button on the podium and if he hit it.....some sidedoor would open up and two clowns would emerge and toss a cream pie at some CNN reporter.

8.  Is there any chance that meth or opioids are selling at a lesser rate right now?

No one is suggesting that.  Begs the question of where folks have the money, and the higher risk factor of dying, from the virus and meth use.

10.  Are we now finally all done with the Biden-Burisma 'chatter'?

Well.....NO.  If you follow the Senate talk.....there's going to be a reported issued on Burisma in mid-summer.  At the very least....Hunter will look look like a used-car salesman acting as a CEO of a typewriter company.  I doubt if Joe comes out of this report looking good.

However, within six weeks after that report.....then we will be done completely and no one in five years will remember the word 'Burisma' and Hunter will be some reality-TV star in the hills of Idaho.
at Wednesday, April 15, 2020 No comments: