Over the past month, I've probably watched at least fifteen different interviews with the new political figure out of New York City....Alexandria Ocasio-Cortez.

So I've come to this observation.  When you get ready to finish college (for a four-year degree), they need to require some type of oral exam or Q and A session.  You need to be able to state some logical arguments, and sustain a basic conclusion.  In the case of Ocasio-Cortez and her degree from Boston University and her degree (supposedly relating to economics), I would suggest that she's pretty much lost and unable to conduct a logical argument or sustain a basic conclusion.  In simple terms, I'm not sure what she did four years, but that $49,000 per year....was pretty much dumped down the drain with little gained in terms of intellect.

I'll even go as far to suggest that everytime she speaks and does one of her arguments....it hurts the reputation of the University.

I doubt if any university wants to implement some kind of qualification exam for their Bachelor's Degree.....mostly because half the students would fail, but it would suggest to me that all we are doing is pumping idiot 'man-kids' into the public, with no true skills gained from four years of college.
at Wednesday, August 01, 2018 No comments:

The Next California Exit 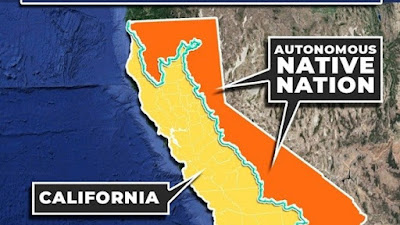 I sat today reading over this newest California-exit plan.  This idea is that the eastern portion of California would be given back to the “autonomous Native American nation.” (aNAn)

There are several problems with this.  First, they put it up as a ballot measure.  If voted upon and reaching a passing rate....neither the State Constitution nor the federal government.....have any method to really make this work.

Second, if a regular guy owned property in this region? Well....you'd have to compensate the guy, and I would imagine this would get up into the hundreds of billions.  Who would pay it?

Third, who exactly is the aNAn?  I could see a dozen tribes trying to get 'respect' and having control over this region, with this going into twenty years of legal challenges.

Fourth, Why limit this to the eastern side of California?  Why not the entire state? Or why not the western end?

Fifth, there are dozens of federal parks, reservations, and military sites in this region.  I just don't see the federal government giving them up.

On paper, it's interesting....beyond that, it's a joke.