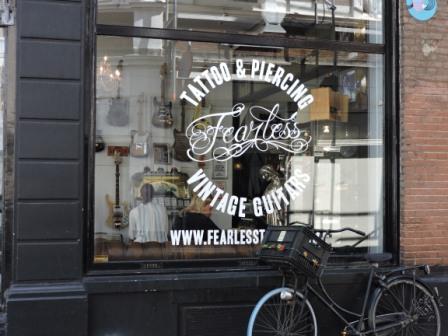 A couple of weeks ago, I spent some time in Den Haag.

Walking around the streets, I eventually came across this one business.

It's a combination vintage guitar shop and tattoo-piercing shop.

It's an odd combination.  Kinda like a chainsaw-and-muffin shop, or a fishing bait-and-barber shop.

Course, I should note that across the street is a Dutch coffee shop (meaning....joints or marijuana).  My guess is that the guy started off as one type of business, and after a while....he chilled out....going to a secondary business.
at Thursday, September 21, 2017 No comments:

When Does a Comedian Cease To Exist?

Back in the 1970s....there were dozens of comedians who came into the living room weekly via TV, and delivered a four-star performance.  Redd Foxx, Don Rickles, Richard Pryor, and Johnny Carson.  They never jumped into the middle of some social discussion, political talk, or lifestyle sermon talk.

I think all of that type of comedy survived through to the 1990s.  At some point, you'd come to notice a handful of comedians who wanted to be 'ministers' in some way, or society leaders.  You would start to notice viewers hitting the mute button or finding other nightly options to watch.

I noticed this week where Jimmy Kimmel getting into a political fight of sorts.  For ABC and the late-night show....there's not much to worry about because most of the angry-type viewers are watching his show in the first place.  In fact, that's one of the interesting things about late-night TV, when you come it against the 1970s.  In the 1970s....you had few options....today?  There's at least forty potential networks to watch....out of which you could catch some episode of Gunsmoke or Gilligan's Island if you desired.

But as you start to shift around....there are dozens of comedians now with agendas and social fights on their hands.  None seem to worry about tomorrow or the next year in terms of viewers or public interest.

I see the same problem with the NFL.  No one seems to worry about viewers leaving or the payscale ever decreasing.

What happens to a 28-year old running back who has some public social fight on their mind and no owner wants them on the team?  They have to source out plan-B.  That typically means taking a $300,000 pay-cut.

What happens to a 40-year old comedian who has some public social fight on their mind and limited viewers?  They will eventually have to find a plan-B, and accepting a 50-percent pay-cut.  The acts in Vegas?  Well....half of those audiences were right-wing or conservative.....so it's unlikely big-bucks will come to be offered for a six-week show at such-and-such casino.

I don't want to condemn these people....but if you hit big-time by age 45, and you've lost half your fan base by age 50....what does it say over your humor, or your ability to entertain?  Were you really a comedian....or did you just have a fleeting moment where you lost it all?

So what does a out-of-work comedian do at age fifty?  Tend bar?  Sell tires?  Do the Channel Nine weather?
at Thursday, September 21, 2017 No comments:

There is a push to unseal the indictment against Hillary Clinton....back on the Whitewater episode.  It's an amusing thing to bring this back up and what might be sitting in the legal paperwork that was never finalized.

All that ever comes out of this Whitewater discussion is a couple of marginally competent political players and wannabe-bank empire idiots....got into a joint deal to buy some overpriced rural property in Flippin, Arkansas (about 130 miles north of Little Rock). The site was near the Buffalo National River Park, which has thousands come in yearly for camping and recreation.

The concept to the Whitewater project was to break up this 230 acre tract of property near the White River, and sell it as upscale cabin property for visitors (there’s no major airport nearby so you’d have to drive in for the most part).

At this point in the 1975-to-1979 period....folks were starting a recreational phase....where they wanted a little bit of civilization and a bit of the Ozark wilderness.  It could be rough....but only marginally rough.

Flippin?  It's a town in north Arkansas with a population of around 1,300 residents.  Back in 1975, they would have had around 850 folks living in the local area.  There's two US highways that transit the area....no interstate.  The nearness to the national park?  It's about ten miles to the south.  Major urban areas?  Springfield, Missouri is about an hour's drive away.

While the strategy had some merit....it was built upon the idea that you needed to buy the property and wait. There’s a variety of talk over the waiting period...some people think they needed at least five years....some would speculate that a dozen years were minimum on what’d it take to turn this property into profit. In this case, two issues popped up.

The first was the timing. In the latter part of 1977...interest rates were at a decent level and people were attracted to long-term investments like this, and the idea of buying an acre of property for vacation properties. Oddly...about 15 months after the purchase by the joint Clinton-McDougal team...interest rates had done a hefty gain, and made the purchase deal into a mess, and no buyers were coming in for the small-tract purchases.

The second issue was the Clinton need to turn a profit in a short period of time. This $203k that the joint team put down on the property...would today be worth around $900k. For Bill and Hillary...this long drawn-out wait with a substantial amount of their savings was a major problem. For McDougal....they really didn’t have the money to keep up interest payments.

On ranking risky investment options...I suspect most people would say that this was a ‘8’ on a scale of one to ten, and would only have worked if they’d sat on the property for twenty-plus years...something that neither party were capable of doing.

As for criminal behavior? Most of this comes from another McDougal project (without Hillary or Bill involved) in the 1985 era (the Casa Grande episode). In this situation...illegal bank loans were worked up and allowed McDougal to run another land speculation scheme....this one being much closer to Little Rock and had a lesser risk factor. The bank audit laid out the illegal loan, and investigators looked back at the Clintons to see if the same pattern had been used then....which for the most part...could not be proven.

The only shocker now if this draft indictment were unsealed....is IF some evidence showed another illegal loan used in some fashion, with Bill or Hillary signing it. Since the property purchase for Whitewater was $203k (the 1979 price)...one has to wonder if there was some second loan used in the down-payment process with fraudulent data.  No one has ever suggested this occurred, and that the money 'lost'....was purely their money and McDougal's cash.

Bringing this all to an end?  An end to what?  A bad land speculation deal that never paid off?

It would be different if you came up and laid out that these sixty-odd lots were all bought by 'friends-of-Bill' for inflated prices (100-percent over the original purchase price).  It doesn't appear that this really occurred.  Maybe there's something in the draft package which will show a dozen folks came and bought a dozen lots way beyond the value....like $40k for a 2.5-acre lot.  I'll reserve judgement until the smoke clears on this one.
at Thursday, September 21, 2017 No comments:

“Today, you can create content, gain the audience, build the bots, pick out the election and even the voters that are valued the most in swing states and actually insert the right content in a deliberate period.”


-- Clint Watts, counter-terrorism expert and former FBI agent back in the spring of 2017 in front of the Senate Intelligence Committee.

This comment came to revolve around the dangers facing the Electoral College and how it might be destabilized.

Actually, you could have said this for the fall of 1789, in describing the first election of the United States, and then repeated it for every single election since that point.

You find a candidate....a platform....a group of 'talkers'....hype up political theatrics....and swing voters from one wild side to the other.  It's done at the local level, the regional level, the state level, and the national level.  Both liberals and conservatives are guilty of the action. Somewhere in the middle, you've got lobbyists, agenda-provocateurs, snowflakes, lives-matter pretenders, religious fakes, and moralists-on-some-righteous-campaign....all working on creating 'content'.  Even 12-year old kids will be dragged out to Senate hearings to insert content and flip an audience.

The idea that the evil Russians are behind this?  They are simply one single group out of 10,000.  Go ponder that for a while.
at Thursday, September 21, 2017 No comments:

Fortune magazine went out and did a fine article on the idea of financial literacy.  They came to study the sad state of affairs in America and then said it in a clear way.....roughly two-thirds of Americans simply don't have the knowledge to pass a basic finance literacy test.

When I finished high school, I reflected upon all the knowledge dished out...particularly in math....over twelve years, and I thought it was mostly all worthless.  They weren't able to put the math concepts into some process where it meant something.

I don't think this situation that Fortune describes is just a recent problem.  You can go back to the 1960s and find roughly the same group of people (I think) who were short-changed on this type of knowledge.

Fixing this?  You'd have to go the text-book writers and convince them to alter the whole scheme of math knowledge and build all kinds simplistic exercises into the daily lesson plan.
at Thursday, September 21, 2017 No comments:

The comment....."You Know You’re Being Conned, Right?" came up in a news item this morning.  The comedian-philosopher Bill Maher used this comment to a guy who claimed he was a Trump-supporter.

I sat and pondered over the quote for a while.  Then I came to this conclusion.

The problem here, which Maher may not realize....is that folks have been conned for generations.

Most folks have been conned so much....that they enjoy a fake episode of Amish Mafia, because they know it's an absolute con-job.

Maher can go and talk over this for hours, but the plain fact is that folks got used to con jobs, and they finally saw a chance to send a counter con-job back at the politicians, the journalists, and Washington DC.

And here is the curious thing.....I don't think Trump is the last of the counter-con-job enthusiasts.  I think he simply opened up the door and there might be a few folks entering the system.
at Thursday, September 21, 2017 No comments: