How Congress (and the Senate) Should Work

I admit....I'm not a rocket scientist, minister, journalist, zoo keeper, car mechanic, leprosy expert, doctor, cowboy or ergonomic-chair engineer.  But I'm willing to go out on the limb and prescribe the ten things that ought to happen IF you wanted to fix Congress (and the Senate).

1.  The Speaker ought to be a non-representative....not elected by any state.  It's a full-time job and you can pretend all you want....but representing your state and performing the Speaker job.....is a sixty-plus hour a job and needs to be a guy with no debt to the Republican National Committee or any special agenda group.

2.  The Senate needs to be set free.  They need to have nothing to do with the budget or taxation standards of the nation.  The Senate should be around to confirm judges, approve treaties, agree on Presidential cabinet members, and attend funerals for dead VIPs.  I think the Senate should meet for twelve weeks starting in January, another four weeks in August, and maybe a week in October. Senators should not be allowed to travel overseas or beyond the US border except for funerals or vacations with their spouse.

3.  The House ought to require a simple majority for any budget or taxation issue....fifty-percent plus one.

4.  Senate and House members should be limited to six appearances a year on any TV network, period.

5.  Any House or Senate member who misses more than ten-percent of the roll-call votes each year....should have ten-percent of his salary deducted for the next year.

6.  If elected and sent to the House.....you need to walk in on day one and take a forty-question test on your home state.  Simple questions.....name the capital, the governor, the state bird, etc.  If you don't get 75-percent or better on the test.....you get sent home for a week and get a retest next week.  If you don't pass on the fifth time.....Congress notifies the state that you are some dimwit and they need to replace you.

7.  Each state legislature ought to have the authority to meet and recall their guy for a period of thirty days....if they disagree with his behavior or voting pattern.

8.  Any Representative who is accused of fraudulent behavior or corruption would be subject to a 45-day suspension and a full-time judge would be sitting and ready to go with a full-time prosecutor to determine if you are a person with no respect for the law.

10.  Jeans and leisure wear would be authorized to wear on Fridays....but no t-shirts or tube-tops.
at Saturday, October 10, 2015 No comments: 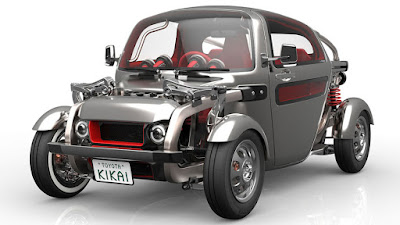 This week's auto show in Tokyo will feature a Toyota demonstration vehicle....the Kikai.

It's a three-person car with hot-rod-like features.

Potential to become a sales item?  No one says much.  No price.  No discussion.  Just something to make people ask questions.

The thing is....if you keep looking at the Kikai and think a kit-car situation.....people might have a passion for it.  Imagine you order this crate from Japan for $12,000 in parts.  It arrives and gets pushed into your garage.  You spend two years assembling it, and then you throw the tag on it and start to drive it.

I think Toyota ought to think in a different fashion....to make a hobby car with features that you could select and just have thrown into the crate.   Toss in a laptop tab with all the directions and videos to help you assemble it.  Don't even offer tires with it....just the rims and have the guy go and select his own preference for tires.
at Saturday, October 10, 2015 No comments:

After this community college shooting in Oregon.....I watched for the hundredth time.....another big mention over the Nazi effort for gun control and how they disarmed the general public in Germany.  Frankly, I'm tired of the bogus story and how no historians ever stand up to correct the story.  The pro-gun guys always like to slam down the anti-gun guys by linking the Nazis to controlling guns.  It's all bogus.

At the closure of WW I.....defeat occurred and German troops in mass droves...packed and went home.  They went by rail, by horse and wagon, or just walked home.  There was no real thought to the soldier and his weapons.  So, virtually all of the German army participants walked home with their guns.

As the defeat had transformed the nation into a very weak democratic structure (no Kaiser).....over the next two or three years, there's one continual worry or threat.  Everyone views Russia and they now sit in Germany to worry about communist revolution coming to the fatherland.  Naturally, all these troops sitting back in their hometown.....with guns....is a big issue.

So, there's one massive push to establish gun control in Germany in the early 1920s (a dozen years before Hitler and the Nazis).

Basically, while no numbers or real statistics exist.....the general belief by those who've reviewed the period....is that this first original effort to control guns in Germany was a failure.

Roughly six years go by and the same democratic structure....still unaffected by Hitler or the Nazis....come back for a second chance to try more gun control because there's still massive fear of a communist revolution.  This episode might have been considered mildly effective at best.

So as 1932 rolls around and there's still this massive fear from the general public and the political apparatus of Germany.....the Nationalist Socialists are brought into power (37-percent of the vote, if you were curious.....meaning that almost 63-percent voted against the party).

The Nazis did enact one or two measures that are gun-control situations....mostly to require gunsmiths to keep records of repair and serial numbers of the guns inspected or fixed.  They didn't have to do much because the Democratic apparatus had already put major measures into effect.

If you stood back and looked at matters.....Germans feared the most out of the communist revolution coming and how guns might play a role in a successful revolution.  Americans might agree.....runs do add to the success rate of a revolution.....if in the hands of the 'good'.  This might bring up a totally separate topic for discussion.....but it's the simple truth of the matter.
at Saturday, October 10, 2015 No comments: