1.  Are all these people who were making $50,000 a year and living pay-check to pay-check in trouble?

They were in trouble last year, and simply have fallen to the final step.  There were people making $150,000 a year, and living under the same umbrella.  You can pray for them, and offer them some burgers off your grill, but otherwise, they shouldn't be on your 'gotta-save-them-souls' list.

2.  Should the President have done something earlier?

Oh absolutely.  There should have been some Army-run camp in New Mexico and once you were tested 'positive'.....they should have trucked you there and waited for you to pass to 'negative' or passed-on.  See if that reaction makes your CNN journalist guy happy.

3.  This World Health Organization budget chatter....is it worth discussing?

Basically, they get 2-billion dollars worth of money per year.  Out of this....8-percent is for travel expenses.  Four-percent goes to actual medical 'stuff'.

However, if the top 100 employees all travel in luxury (business-tickets, five-star hotels, nice limo-rides).....then I'd say they need some restructure and general supervision.  But you don't know the rest of this story.

4.  Does money and funding matter that much in an election?

Here's the thing....if someone seems ill (cough, fever, etc).....you ought to keep a minimum of ten feet away from the person (that's Alabama-social-distancing).  We also have a stance called bull-distancing, where you estimate how fast this bull can react and stomp you in the ground, and generally it's 300 feet in a fairly open field.  If you are crippled-up....double that to 600 feet.

6.  Does a 'at-home-virus-test-kit' make things any different?

7.  No one in North Korea has seen Mr Kim in the last couple of days....big-deal?

Generally, he's a traveling circus and all North Koreans beg for a chance to view him.  So, yeah, it's a big deal.

He's a lot of things.  He might even be capable of doing a Shakespeare play, if you asked him.

9.  Best movies to watch while in isolation?

10.  Can virus-isolation make you into a nut-case?

Well, if you just sit glued to the TV, consuming CNN hour-by-hour....yeah.  But if you have a list of forty odd-jobs to accomplish.....you won't even notice the isolation.
at Saturday, April 18, 2020 No comments:

Some people would readily admit....they need some boost to survive the next month or two.  $2,000 would probably be helpful.

Some other folks would admit....they don't need the cash.  These are the people who'd get the $12,000 after six months, and likely blow it on some world-cruise, or some month-long trip to Australia. 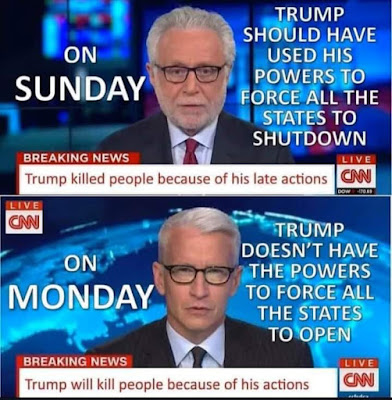 Yep....on one day, you wake up and listen to the brilliant intellectual journalists tell you one thing, and the next day....you wake up and just start to grasp what they said....thinking either one of these guys is doped up, or both of them are doped up.

Then in the banner, you note....Trump DID KILL people, but the next day....Trump WILL KILL people (meaning he hasn't done it yet).

So you sit there and wonder....couldn't they just chill out and get to one central theme?
at Saturday, April 18, 2020 No comments:

Joe, the Interview, and the Virtual Convention

I went back and viewed an interview this week....via CNN, with Anderson Cooper, Doctor Sanjay Gupta, and Joe Biden.  It was a simple format, and extremely 'soft' questions.  All Joe had to do is just speak in easy solutions, and state some impact points.

It was obvious that Joe had the questions ahead of time, and his people had a written response.  Joe got about one sentence into the answer....then went 'gasping' for the rest of the thought/solution....looking down at the paper to remind him of what to say.  You could tell that both Cooper and Gupta were trying hard to keep their facial impressions and not act puzzled.

Joe was unfocused, and marginally able to 'perform'.

What's this lead onto?  There's not much doubt in me to believe in the latter part of 2019....Joe Biden had some type of mini-stroke, and his mental condition is deteriorating at a fairly good pace.   At 60 days ago, you could still see some lucid and positive moments with Joe and it was infrequent that he'd go 'off'.  I would make the estimate that in another sixty days....he'll be unable to make public appearances.  But that would put him up to the end of the primary and out of the 'mess'.

So lets talk about the virtual 'convention' that will occur.  It's a topic that no one in the news media wants to pick up or discuss.

My guess is that shortly after the last primary (Kentucky, 23 June)....states will begin to hold a session day.....where the 300-odd convention folks will meet in little groups around the state for a couple of hours.  They will 'elect' one or two individuals from each group, and the state's 300 group will likely drift down to around 20-total individuals.   I suspect all the states will generally go the same way.

The convention date is now 17 August.  Fifty of these groups will 'dial-in' and participate in the conference convention, with everyone else just 'watching'.

What I suspect is that Joe's family will announce on the first hour of the virtual convention that Joe accepts their vote, and has selected his VP.  It'll be a woman, and it's a fairly short list.  Yes, Hillary might be on the list, but there are a minimum of five I suspect.  The virtual convention will end after eight hours.  Speeches by Obama, Hillary, and a dozen other folks will be the highlight of the day.

Now, you notice....I said Joe's family will be the key figures at the convention.  I don't think Joe will show up, and that it'll turn into a rather odd deal where they say he's under the weather or has a fever.

A week into this new campaign period.....the family will appear with the DNC and just say Joe is finished, and can't continue.  The VP will step up....becoming the candidate, and at that point.....NY Governor Cuomo will be the VP.

No one in the news media will ask much about Joe's condition....it'll all be very hush-hush, and around a quarter of voters will ask what the hell was the whole primary about?

Joe appearing in public after mid-August?  No.  That's probably not going to happen.

People will talk about this whole event for years to come and wonder how the news media just looked the other way.  It's amusing in some ways....it's tragic in other ways.
at Saturday, April 18, 2020 No comments: