I spent an hour this morning....trying to understand this whole Starbucks racial episode that occurred in Philadelphia and how the cops got involved.

It's basically a eight-line story.

'Joe' and 'Marty' (both black) show up at this Starbucks and one of them wants to use the restroom.  No, they hadn't bought any coffee, tea, or $5-muffins.  They just wanted access to the restroom.  Starbucks, like so many commercial operations, prefers to allow use of their restrooms...ONLY to customers.  Joe and Marty declined to buy a $4 cup of Starbucks coffee or a $5 muffin. So they go and sit down in the customer area.  Yep....just sitting there.  This peeves the manager, who calls the cops.  Joe and Marty have not violated a single law.  The cops arrived (white guys).  They handle this in a semi-professional manner but intend to remove Joe and Marty.  All of this is captured on video. End of the story.

Most folks will suggest that if they need to use a public toilet....they will walk in and buy something (a soda, a muffin, a cup of coffee, etc).  In the past twenty years....I've probably gone and done my public toilet business with the act of a stupid purchase at least four-hundred times. Via McDonalds....I've probably wasted over $150 on something in this period....just to 'appreciate' their public (clean) toilet.  I've even bought at least twenty cups of Starbucks coffee....because of toilet needs.

Joe and Marty's tactic of sitting there?  That's the thing about the story.  They weren't going to buy coffee or a $5 muffin.  They just intended to sit there.  Maybe there was some physical message, or some intimidation factor....but then...that's not illegal.

All of this makes Starbucks look bad but then what really is the understanding over the public toilet business?

In Germany over the past decade....I've seen a number of public toilets go to a 'charge-deal', where you actually pay a buck for use of the restroom, and you get a 50-cent ticket upon leaving to use at McDonalds or Starbucks.  I suspect long-term....that practice will start to occur in the US, and free toilets will disappear.

As for Joe and Marty?  Starbucks will have to pay them off in some fashion.  It wouldn't surprise me if this got into the half-million range....all because of a toilet decision by the manager.
at Wednesday, April 18, 2018 No comments: 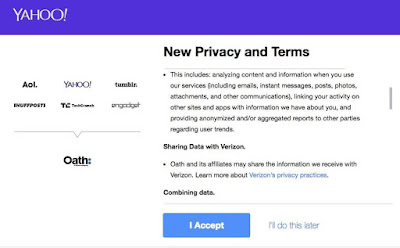 About six days ago....if you used features of Yahoo enough....this new privacy and terms agreement would come up.

At present, I think I've had to agree or accept the 'oath' now.....about 60 times.  It's reached a point where I'm questioning the logic of this continually popping up.

About nine years ago, I came to this point with Yahoo.....where I regarded them as a fairly lousy platform. They have all these engineers and geeks on the staff, and they do lousy work.  Things never get tested.  When they say function-X works this way.....it typically fails.  Why?

UPDATE: Day seven.  I've punched the 'I accept' button now at least 100 times.  There was absolutely zero testing with this stupid 'terms' page.
at Wednesday, April 18, 2018 No comments: