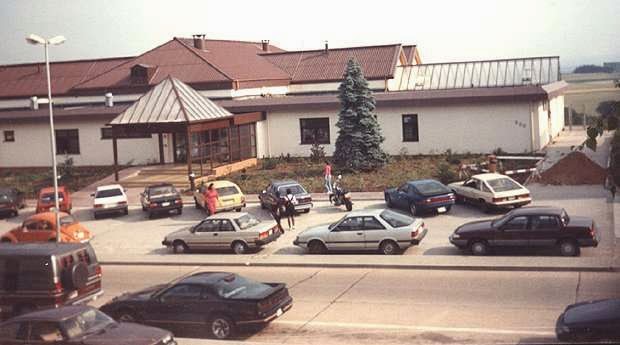 I came to a number of conclusions about these clubs.

1.  Until the early 1990s....no one ever cared if they made a profit or not.  Suddenly, almost overnight.....a club had to be profitable, and you started to see managers go fairly frequently.  The ones that stayed.....invented all kinds of gimmicks....and they cut zero profit situations entirely.  It was like day and night, in just a year or two.

2.  Every single club throughout the 70s and 80s....had a room in the back where the senior NCOs would gather and play poker.  It was their home, away from home.  They drank while they played, and I imagine that a quarter of them needed alcohol rehab.  At some point in the 1990s....these rooms rapidly started to disappear.  Maybe it was the type of entertainment that looked bad, or just a whole generation of NCOs retired.

3.  For some reason, almost every single club could hustle up and lay out a fabulous Sunday buffet dinner which attracted just about everyone on base.  But from Monday to Friday....this was the last place on Earth that you wanted to go for noon lunches.  It was like an entirely different crew running the place on Sundays.

5.  For years and years....the Ramstein club had live entertainment at least five nights a week.  You could walk in on a Thursday evening and there would be four-hundred folks sitting around.  Live entertainment today?  If lucky....they  might run something up once a week.

6.  I spoke to a NCO a couple of years ago and asked them what the chief draw of the local NCO Club was, and he admitted that they were running a mystery dating game agenda, and that would usually draw around a hundred folks on a Friday night. No band?  No.  No DJ?  No.   It was reality dating as entertainment.  I questioned this guy.....how could this draw any crowd?  And he simply admitted that it was fairly lame, but this was "safe" and would pass the base morals agenda easily.

7.  In all the time I ever spent in an Air Force Enlisted/NCO club.....I've only witnessed two fights.  The first one was in 1977, and between three drunk guys over one gal.  The SPs arrived....totted the three off to the jailhouse, and the gal just walked out the front door with some fourth guy.  The second fight was between two drunk housewives....arguing over something of a nature involving a spilled drink.  The truth is....Air Force guys just weren't the type to fight much over anything....even when drunk.

8.  Bingo was a gimmick to draw in Asian wives of Air Force guys.  I worked with a guy who was hired by the club to run their bingo operation.  In a normal one-night operation.....my associated hinted that over $10,000 would easily run through the bingo operation.  I asked about the profit take, and he said it was almost zero.  The club's whole game was to make it last two hours and ensure they drank and ate a fair amount.....which was where they made profit.

9.  The worst club I ever went into....was an annex of the main club.  I actually showed up on opening night....shocked at bright colors, bright lights, pool tables in the open, and a modern-style bar.  The burger bar was four-star and I was amazed at the offerings of the club.  Six months go by, and I show up at the same club on the second occasion....finding it a dark, shadowy place....no pool tables, just open floor.....and weird music in the background.  Everyone was dressed weird, acted weird, and you felt like you were at some San Francisco bar.  I quickly sipped through one brew, and left.  Four months later....they busted the place one night for immoral activity in the bathroom, and some hint of drug activity.

Clubs aren't like clubs of the 1970s, or for that matter....of the 1980s....or for that matter.....of the 1990s.  Most clubs have been modernized over the last decade....offer up commercial style food, and have a small pub/bar for the marginal crowd that might show up for one single drink.  The fear of drinking on base?  I think it weighs heavily upon folks today.  In 1979.....you might have three-hundred folks fairly drunk on a Friday night at the Rhein Main Air Base NCO club.  A typical club today on a Friday night?  There might be one guy drunk, and you can put a 50-50 bet on him not avoiding the cops and some arrest.