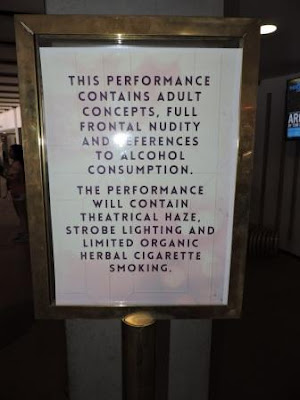 One of the more interesting tours I took in Sydney....was the Sydney Opera House.

It was kinda a surprise to me that they run five or six different shows each night, with different rooms or halls available in the building.  Most of my life, I always had this impression that the Sydney Opera House was just one big hall.

So, in the hallway leading up to one of the 300-person rooms....was this sign, and the Aussies were kind enough to warn you ahead of time.

The tour guide noted that a number of people....including Americans....show up in Sydney for a performance at the hall, and some folks get a bit disturbed over Aussie views....which naturally include references to alcohol and includes some boobs being shown.  So.....they warn you ahead of time.

I thought it was nice of them....at least giving some folks a last chance to avoid something that would get them all hyped up or disturbed.
at Saturday, March 05, 2016 No comments: 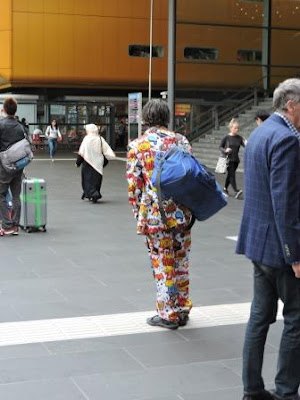 Two weeks ago, I stood for a brief minute in the Melbourne, Australia railway station, and here was this guy.  Naturally, being from Alabama....I noted his style of clothing and colors.

It's not something you could buy off the rack at Sears or JC Pennys.....but to be honest, it's the kind of thing that I would have liked to have bought and worn on my last day at work (when I was retiring).

It would have said something.
at Saturday, March 05, 2016 No comments:

Trump in the End

Someone conducted a poll on Super-Tuesday, and came to this odd fact with what people said.  Ninety-five percent of Republicans voting.....said that they were angry and frustrated with the federal government (the whole government).  Sixty-five percent of Democrats said the same thing.  Basically, they want it to function....to revolve around like some theater operation for public entertainment.

What this means?  If both groups are serious.....it'll be a massive vote in November for Trump, and some enthusiasm for Trump to start firing people or putting some people into difficult positions.

If this were smaller group....say forty-percent Republican and ten-percent Democrat.....then I'd say it'd just blow over and the news media could still play out the regular games.  But this is a massive number of negative voters.

1.  Obama-Care rapidly is challenged and the Republicans and Democrats will be forced into a legislative corner to probably accept Trump's vision for health care.  It might be a bitter thing for the Republicans to accept his plan, and some Democrats will have problems.....but the present system isn't made for permanent usage.

2.  US troop strengths in Europe will be downsized.  I'll take a guess that half the troops will be removed by the end of 2018.  Trump will declare the cold war over, and keep the troops active....on US soil....and start to envision some different version of NATO in the future.  If France or Germany is worried about the less troops.....they will have to find money in their budget to expand their own military.

3.  Trump will ask budget questions about where money is going with Homeland Security.  Their bottomless pit....will be exposed.  Some people will be asked to leave, and I suspect their budget will be cut over four years by ten-percent.

4.  The business plan for the National Park system will be questioned.  All the services and support personnel of the park system will be brought up for review and I would take a guess that ten to twenty percent of the force will be dismissed over a four-year period.

5.  Whether Congress likes it or not.....there's going to be a massive tax revision somewhere between 2017 and 2020.  It might be a flat tax....it might be a different way of handling capital gains....but there's some changes coming which will make people happy about.

One Thing About Mitt's Phony Talk

Over the last dozen hours, I've sat and pondered upon this one comment by Mitt Romney.....over phony political figures.

Maybe I'm showing my age.....but I really can't think of a single politician today......local, state, or national.....who isn't phony in some way.  I'm sure Mitt thinks that there are fine, honest, humble and genuine people out there, but frankly.....I don't see any of them.

You have the fake guys who pretend to be religious, and then turn around to demonstrate they just aren't religious.

You have the fake politicians who claim to be decent, and then they do something stupid like skim funds off the office credit card, cheat on their spouse, or get caught with two grams of some nifty new drug.

You have the fake politicians who claim to be impartial, but then around to show how stupid they are or how easily they can be bought off.

You have the fake guys who get some weekend trip to a Arizona resort.....to help rig up a deal for some land developer.

You have some guys who walk around and pretend to be a Republican.....when they really are a fairly decent Democrat.  Go figure that one.

Three decades ago.....I would have been considered one of a small group of people who believed in the massive phony problem.  Today?  I'm of the opinion that roughly one-quarter of society believes in a massive phoniness that exist with political figures.

Was Mitt a phony?  When you start looking at his business background.....some things fit well, and some things just don't come across as genuine. Was Mitt a real conservative or just a fake conservative?  Some people go back to examine his years as a Mass governor, and discuss various examples where he was more or less a hybrid conservative....to survive within a fairly liberal state.

Is Trump a phony?  Probably so.  He's probably like the other 100-percent of political figures out there today.  But at least he pretty much says what comes to his mind....something that you haven't seen in decades with most political figures you encounter.
at Saturday, March 05, 2016 No comments: