This hacking in the UK episode?  What's the whole jest of this...in case the media really didn't make this plain?  A newspaper chain hired up folks who were simply more talented as detectives, than journalists.  When the boss said there might be more to a story....unlike their competition....they went out and dug into a story (what people used to do in the 1960s in America...especially the NY Times).  So they had folks on the payroll...who went and hacked into cellphone accounts (forbidden by the law, naturally).  Along with the other 2,000 British kids who hack on a daily basis into various cellphone and email accounts....these journalists of News of the World....did in-depth investigations.  Some folks might say they did more than the cops might have....but we don't want to insult the British cops (like they need it).  So today, the guy who was at the heart of this mess and the original guy to admit they were hacking....killed himself.  The next step of the authorities?  Without this guy around (he was a heavy drinker and drug user, if you were curious).....they will have a tough time convicting any of the management now.  All in all....that's the jest of the story.

Oh, and if you were wondering why the US media news folks weren't covering the gun sales episodes into Mexico to the drug cartels?  Well....the News of the World is owned by Rupert Murdock....the guy who owns Fox News.  The fact that we have federal law enforcement folks arranging automatic weapons sales to Mexican drug thugs.....just isn't as juicy as some hacker in the UK....even if the automatic weapons have killed hundreds of Mexicans.  Go figure that. 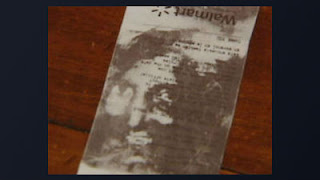 Finally....at some point, you knew it would happen. This South Carolina couple came back from Wal-Mart after buying some pictures and dropped the receipt on the floor.  Days passed, and now....an image of Jesus has shown up on the Wal-Mart receipt.  Now, I'm not going to go for or against this story....but if you dug into the story a bit....you'd find out that the couple aren't married and the first thing any good Baptist would say....is that Jesus would never appear on some receipt of some couple living in sin (not married).  As for the meaning of this picture of Jesus?  It can only mean that Wal-Mart is the only placed blessed for good people to buy what they need....even golf clubs, beer, and weed-whackers (on sale in aisle four).
at Monday, July 18, 2011 No comments: 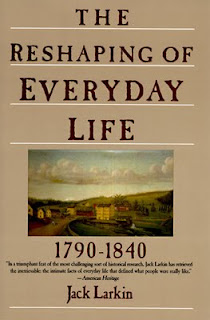 It's an odd book, which has been out for over a decade.  To be honest, I doubt if it ever sold any good numbers at all.  You can still find it on Amazon.

It's a book you can read over in a week, and covers everyday American life for a fifty year period in the colonial years.  I would actually like to make it a mandatory reading for every fifteen year old kid in America because it really paints a harsh environment where people were lucky to live to be forty years old.

The book covers love, romance, marriage, houses, food, coffee, entertainment, booze, and just about every situation you can imagine for that period.

In the end....you came away impressed on how people survived and enjoyed what little they did have.  Just having one pair of shoes....would have been a great achievement for most folks.  So if you needed some reading material over American history that would entertain you....order the book and settle back for good reading.
at Monday, July 18, 2011 No comments:

You would think there would be alot more turmoil and protests over the debt games being played out in Washington.  There ought to be protesters....angry mobs hating Republicans....upset Tea Party folks....etc, etc.  But there aren't.  So why?

Well....because Joe, your neighbor, owes $80k in college loans and he admits he won't be finished paying this off for another fifteen years.

Aunt Maude, your beloved aunt, owes near $60k on four VISA cards that she uses regularly to shop QVC....and will likely never pay off the cards before she passes on.

Charley, your favorite barber, owes $44k on a brand-new car that he bought.  He admits that he has never cleared more than $32k a year on salary but he's willing to take out a eight-year loan to get this sports car of his dreams.

Claude, your cousin?  He bought the $350k house back in 2007, with only $35k in the down-payment.  The house has gone down in value to $200k now and Claude is contemplating just handing the keys to the house over to the bank and declaring bankruptcy.

Karl, who lives down the street....wrapping up divorce number three?  He works sixty hours a week and barely takes home $1400 after paying alimony and child-support to the three ex-wives.  He's 42 and says he might find the right woman next time....if not....he'll be bankrupt by that point.

Sid, who bought property in Vegas as an investment in 2004?  The value just dumped by fifty percent and he's still paying $450 a month for this "investment opportunity".  It may take twenty years for the property to get back up to its original value....and maybe sell.

Tim, your buddy from high school?  He finally found a job after three years of unemployment....but had to move to Fargo, North Dakota to achieve this honor.  He lives out of a RV because his wife won't move to Fargo....and most all his check goes to the wife and kids at the old house.

Frankly, we have become a huge debt crowd....in a debt nation, with no real grasp of what it was like in the 1970s.  Before the credit cards, QVC, massive college costs, alimony-on-top-of-alimony, and stupid property prices.....we were living a simple life, without much debt.  The same could be said for the nation itself.  We didn't build museum after museum.  We didn't build bridges on a whim.  We didn't hand out cash to research teams to figure out why bears like honey.

So, as you sit back tonight.....counting the few dollars left in your billfold....and watching a bunch of news folks get excited about the evil Republicans, the dimwitted Democrats, or the President's five-star speeches....you kinda wonder why anyone should get excited.  Until you've charged $80k on a couple of VISA cards....you really don't grasp debt or the depth of problems.  Course, the reverse is true too....if you as a nation owed a trillion dollars.....you really don't know debt.