I spent roughly 17 days in Australia.....staying mostly around Brisbane, Sydney, and Melbourne.  So this is my list of observations.

1.  When you sit at a regular Aussie restaurant.....they let you know of a dozen-odd steaks that they have (Tasmania grass-fed, Tasmania corn-fed, Victorian grass-fed, New South Wales grain-fed, etc).  The thing is.....when they finally come out with the steak, you kinda have to admit it's some pretty fine steak....no matter what you selected.

2.  The typical Aussie guy is some guy with a wrench, hammer, and screw-driver....that you call with some big emergency situation, and after thirty minutes.....he's fixed the problem and caused himself a fair amount of sweat.  He'll turn to you....noting that he's a bit dehydrated.....and perhaps its' time for a beer.  You will ask where, and he will note there are sixteen pubs within walking distance and these are the five that he'd recommend.  You go with him and find yourself getting easy acquainted with the guy in a matter of minutes.

3.  Yeah, toilets once flushed.....do go the opposite direction of toilets on the top end of the planet.

4.  There's a Krispy Kreme operation on just about every street corner in Aussie towns.

5.  Aussies make about the worst coffee in the civilized world.  No one can explain this....except that they'd prefer a beer over coffee.

6.  Everyone has a snake story to tell....but I spent the whole time there and never saw a single snake.

7.  Most Aussies are charged-up and positive.  It's hard to find anyone who has some negative prospective.

8.  Mushrooms are served on a breakfast plate.  I've yet to figure this out except they have a major farm industry and can produce just about anything you desire.

9.  The Sydney international airport side.....once you exit the immigration area.....kinda reminds you of some third-world country.  The entry area to the airport?  Worth a million bucks and designed to impress you.

10.  About every tenth Aussie gal that you meet....is six foot tall and reminds you of that Xena warrior gal.

11.  If you walk around Melbourne, Brisbane and Sydney.....shooting black and white pictures.....the architecture and design would all remind you of the 1950s.

13.  Aussies hate their politicians about as much as Americans.

14.  There are Chinese everywhere.....on vacation.

15.  The Coastal Road.....south of Melbourne....is probably the best scenic drive you can find in Australia.

16.  Aussies can make some fine beer, and they know it.

17.  Generally, Aussies hate their version of NPR (ABS and SBS).

18.  If you were graduating from some city-design degree program.....you really ought to go to Australia and observe their design of cities.  Their one and blaring failure?  Rapid transit and interstate roads within the major cities.

19.  It gets to being awful hot in Australia.  You need not ever worry much about snow or needing a sweater. 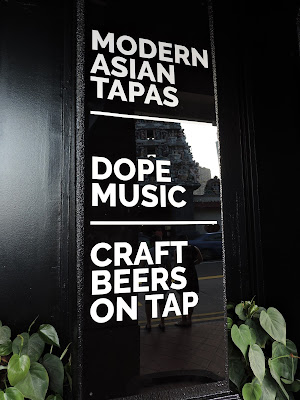 I stood a couple of days ago in Singapore....in front of a pub in Chinatown there.....with this unusual sign out in front.

The question is.....what kind of music is dope music?

In 1978.....it would have invited a dozen responses from the my barracks crowd (my old Air Force days).  At least forty bands would have been mentioned.

The thing is...in Singapore.....life is pretty laid back and non-drug.  If you got into any kind of dope.....you'd be dragged down for some harsh cop attention.  So, you have have some pretender dope music, some fine Asian craft beer, and some tapas.

But this led me to consider this.....would any American bar put up a sign like this?  Cops would quickly jump into the middle of this, but then find it's a fake gimmick and just done to draw people in to drink beer and listen to Little River Band or Johnny Cash tunes.
at Sunday, February 28, 2016 No comments:

I've been on "R and R" for the past three weeks....traveling via Hong Kong, Singapore, Sydney, Melbourne and Brisbane.....so I'll have a dozen-odd blogs to write over the next week or two.

This one?  I stayed at an unusual hotel in Brisbane, which deserves commentary.  I won't name the hotel because of certain reasons....which will become apparent.

I surveyed to forty-odd options for hotels in the center of town and eventually came to this one unique hotel which was an computer engineer's dream.

They had taken all available technology items and tied them into this one hotel.

So I picked up the Samsung phone.....to discover it (coming off the charger) was dead.  I called the hotel IT guy.  He came and put in a new battery and for twelve hours.....I enjoyed this interesting gimmick.  Then it died.....never accepting a charge from the room charger.

Yeah, I checked....the charger was perfectly OK.  Then I noted.....a little sign....if the Samsung was damaged.....it'd amount to possibly 500 Aussie dollars.  I kinda put down the phone and figured it was best not to do much else with it.

Various things didn't work over the four days there.....I had four calls that went in.....to get things fixed (like the typical office environment with gadgets).

I admit...if they'd all worked....it might have been awful impressive.  But it's just like in real life.....you'd like for the 'toys' to work, and they just never work the way as designed.

The sad thing is that it was a perfect location, a perfect hotel bar, and a perfect hotel restaurant.  You'd like to say something pretty good about the place but all these failed technology stuff.....left a bad taste in your mouth.
at Sunday, February 28, 2016 No comments: