When Robbery Doesn't Mean Much

I get my old hometown newspaper, and it's amongst the fifteen odd papers that I tend to read to stay abreast of the world.

So this week....comes the issue noting a robbery attempt (actually two) back on 27 April.  A gal walks up to the Subway shop along the main drag leading to the town around 7:30 PM.  She enters....wearing a hoodie and sunglasses.  She indicates to the guy running the shop that she's there to rob the shop, and she's got a gun (although it's never shown).

Now, here in Arlington....the Subway guy would have tossed open the cash register and thrown the $188 to her in a heartbeat.  No argument.  No hassle.  Just give the lady robber the money.

But this is Bama.

On second one.....the Subway guy is thinking....man, this is like one of those TV show robberies you see on Barnaby Jones or CHIPs.  This vision of a 1973 TV show flashes in his mind.

On second two.....he's now thinking about the possible TV interview with the Channel thirty-one blonde gal and how he'll explain the whole situation in simple direct quotes.

On second three....he's now thinking about that Jeopardy episode from last night where he answered all of the New Testament questions in rapid fire.....impressing Grandma and Aunt Jean.  Grandma suggested he ought to go off to divinity school....maybe launch a TV minister's career.

On second four....he was thinking if he'd paid back his neighbor for the can of turpentine that he needed for the paint brushes.

On second five....that episode at the Memphis hotel flashed for a second....over that strange lady from Burlington, Vermont and how he lost his billfold that night.

On second six....he was contemplating the wasted time he'd spent watching the whole Lost series, which really crapped out by the final eight episodes.

On second eight....he was wondering if Subway would ever give him a regional division chief job.

On second nine....he was wondering if Diet Mountain Dew was really that bad.

And by second ten.....he kinda figured if you were going to rob someone....you'd flash the gun.  And she didn't really flash no gun.

So the unnamed Subway guy.....just said "no".  He wouldn't hand any money over to the dopey young gal.  He had violated every rule in existence in DC, Maryland and Virginia.  The gal turned around and left.

A while later....she showed up at the Minnow Bucket....telling this guy that she had a knife and wanted cash from his cash register.  In the same fashion....the clerk at the Minnow Bucket paused....did his ten-second thing.....and refused.  She ended up walking out again.

Cops indicate that she let in a black Oldsmobile Alero and very distinctive because it had a sunroof....which the vast number of Aleros just never were ordered with that option (I can only assume on this). 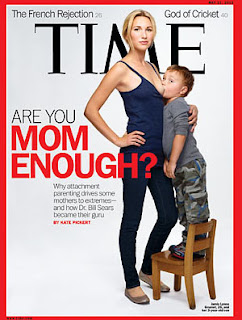 I can cite at least ten reasons why I just don't read or pay attention to Time magazine anymore.  I haven't bought an issue since around 2004.  If you asked me about the journalistic value of the magazine....I'd say it's barely one step above the National Enquirer.

So this week, they had this nifty article they wanted tell, and they had this unique picture that they just had to put on the cover.

I saw this yesterday....and I just stood there pondering over the value of this picture or the magazine in 2012.

The kid in the picture (her actual son) will probably never live this down over the next forty years.  The woman?  She will be getting various offers by men for weekend trips now, and likely fall into the same category as the Octomom out in California.

In Bama, most stores will likely remove the issue from public view and put it down under the counter with the Penthouse and Hustler magazines.  You will have to ask for it and the guy will put it in paper envelope so folks won't see you walk out of his gas station with it.  Public libraries in Bama?  Well....they will probably move to the head librarian's desk and you have to ask for it.

I noted this morning as I flipped the channel on the Today Show.....they were even going to interview the dimwitted mother and have the son on national TV....live.

Real journalism?  I think it actually disappeared around 1999.  We haven't seen it in years, and the folks who pretend to be journalists today....are just losers who borrowed $60k from the government to get a worthless degree, and got dumped into a low-paying magazine job.  This is truly....the best journalism that they can dream up.
at Friday, May 11, 2012 No comments:

This is a sad woeful tale....of how things occur in DC.

We aren't talking about a $2k watch or a $7k diamond ring....it was probably less than $50 for this cheap bracelet.

So about twenty-four hours pass, and some friends of the dead guy and the wounded....decide upon a retaliation situation....wounding a guy.

So about forty-eight hours now pass....with the funeral coming up for the first dead guy.....and more retaliation is planned out.  This time....four teenagers are shot on an evening on South Capital Street in DC.

This week, the court case finally concluded.  It took roughly two months to settle this.  All five guys that were involved in this mess.....had roughly 200 charges up against them.  We won't know the sentencing for the guys (declared guilty on most charges) until 11 September.

A couple of dead folks....a couple of guys to rot in some prison....over a cheap bracelet that simply disappeared one evening.  This is life in DC....sadly.
at Friday, May 11, 2012 No comments: