A Description of Tennessee

"The beauty of Tennessee is a grand panorama, 100 miles in width, and 450 miles in length, with rugged mountains, beautiful valleys and broad, extended plains; majestic rivers, murmuring brooks and sparkling foundations; somber forests, green pastures and golden fields; beautiful flowers, luscious fruits, vineclad hills with purple clusters---Grandeur, beauty and loveliness harmoniously blending with lights and shadows, enrobing vat deposits of iron, coal, marble, copper, zinc and slate, all of which for ages have slumbered in nature’s repose, awaiting the magic touch of capital and labor".


-- First lines of a speech by Chauncey M. Depew at the Lookout Mountain banquet given to Southern Express employees, reported in the Herald and Tribune in Johnson City, 22 Jun 1893 (it was a dollar a year for the subscription in those days).

I enjoy reading old newspapers.  Guys sat around....without the aid of computers and typewriters, and spent hours writing speeches, which would be turned around and used for script in the local newspapers.

This piece?  It's a six-line one-sentence episode.  My English grammar instructor with Louisiana Tech would have had a fit. 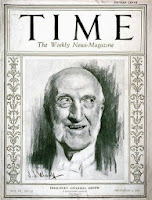 It'd be interesting to know how many speeches a year that Mr Depew gave.  He was a life-long Republican....having given speeches in support of John Freemont (1856) and Lincoln (1860).  He was a part of the Vanderbilt railway system for a number of years.  He probably gave well over a thousand speeches....maybe even two thousand speeches....in his life.  He lived onto be 93 years old and passed away in 1928.

Time magazine felt he deserved a front cover....in December of 1924.

The thing is.....guys would get this copy of the Herald and Tribune, and spend an entire hour or two pouring over it.  It was the one-single connection that you had to the rest of the world.

When someone wrote up a big speech and it got onto the front page....you can imagine a group of folks on the front porch of some house on a Sunday afternoon.  They spoke the whole speech in a slow manner, in absolute dictation of proper English, and were grinning over the wondrous description of their state.

The words made them humble, but feel awful proud of being in the greatest state on the face of the Earth.  So you can imagine these six lines....spoken over and over....running terribly long for just one sentence, but being discussed for hours.

This was the real world for these people.  Feeling proud, and successful.

Sadly, things have fallen a fair bit since 1893.  Six-liners wouldn't work today.  Most of the news on the front page is garbage.  You tend to end a thirty-minute reading and feel more depressed, than happy.  Something in American life has changed for the worse.
at Wednesday, November 06, 2013 No comments:

Healthcare and the Circus Mentality 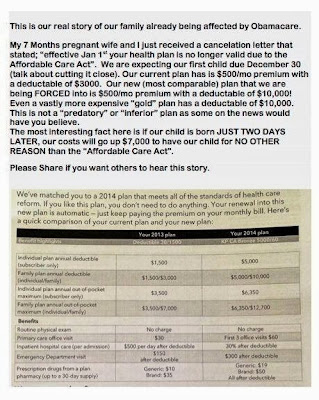 I was sitting here this morning....reading through the news and various forums....and this little personal story popped up.

It's about this guy....who got the note from his healthcare insurance folks.  They noted the old policy is going away.  He was happy with the $500 a month old plan, and it's yearly deductible of $3000.  It was acceptable.

He's angry.  He's frustrated.  He's asking questions.  He'd like to know who gets the blame.

Across the nation, I'd take a guess at fifty million who will fall into this pit for 2014.  Sadly, it only gets worse as we get to July, and the newer rates for 2015 come out.  They will....absolutely will....be higher.

The thing is....as bad as we were in 2008 with thirty million unhappy people complaining about health care options in America....over the next year....we will have around a hundred million Americans who complain about the deductible situation, limited doctors or hospitals in their areas, and fewer options in their future.

The truth?  We just invented a bigger mess.  It's like everyone whining that we'd really like to have a circus come and visit our little town.....then on that fateful day....the circus finally arrives, and Larry the lion escapes to terrorize the town over an entire evening....killing and maiming dozens before calm returns.

In this case....we've got at least a thousand Larry the lions who've escaped from the traveling circus, terrorizing the nation, with the mayor and chief of police talking up "if you like the lions, they can stay"....and the only weapon we've got to defend ourselves is a BB-gun.  Frankly, something is wrong here.
at Wednesday, November 06, 2013 No comments:

Years ago, as a kid, I was into ancient history and the question of other Earths.  In the 1970s, there were simply smart folks walking around and saying there were billions of Earth-like planets out there, and we weren't alone.  It was a best guess type of statement.

Well....decades have passed, and the smart guys went and examined the universe as they know it.  After a long review, they concluded something.  They did statistical analysis, and came to a calculated claim (better than best guess claims)....and now say that there are a billion-plus Earths out there, period.  No longer a guessing game....they are fairly confident in their statement.

By making the statement, we've gone to the next step of this way forward.  Statistically, the odds could be viewed as one in a billion....meaning we are alone.  Or they could be reviewed and you could guess a dozen in a billion....or a hundred in a billion....that other life exists.

The sad end?  Well....a thousand years from now....we might conclude other cultures on other planets exist, but none of them are as advanced as us.  With all the screw-ups and issues of our society....we might be the most advanced society in the universe.  That....might be a tremendous shock for some to accept.

The society that brought Jerry Springer into the living room, delivered the K-Car into showrooms, and devised Gumby as entertainment....the most advanced culture in the universe?  I'd rather not think about that idea.
at Wednesday, November 06, 2013 2 comments:

Virginia governor's race ended....48 to 46 percent, with Democrat Terry McAulifee winning.  To note.....Arlington and Fairfax ended up being the helper on this victory and kinda spells the issues of 2014 and 2016 in the upcoming elections.  As for McAulifee?  He has this odd tendency to take every single golden situation given.....and screws it up by incompetence, corruption or just bad decisions.  He always looks good.....but he's a bad executive.  He'll last four years, and quietly leave because there's too big a mess to clean up.

CNN's latest numbers are crap, period.  Advertisers are getting dirt-cheap rates, and the network is trying dozens of different concepts and new formats.....hoping that some idiots will break free of MSNBC and Fox News, and come back to CNN.  Frankly, it's hard to find myself viewing CNN.  If you can find some hurricane or live car-chase in California....I might flip to them for half-an-hour.  The simple truth is....they look fake, ask stupid questions, and act like some cheerleader squad for the administration.

The federal government is going after Georgia for it's stand-your-ground law.....saying it's mostly unfair.  The general argument is.....a person is never justified in protecting himself or associates when threatened by someone who intends to kill or bring harm to innocent people.  A reasonable guy would stand there and read over that argument.....a dozen times.....getting to the point that you must die under all circumstances to ensure that the Constitutional rights of all people are equal.  For some reason, that just doesn't sell to most folks....unless you are a crack-addict or meth-head.

German business experts are predicting one of the most profitable Christmas seasons in years.  Jobs are stable....the economy actually booming....and stability is obvious.  The US predictions?  The predictions have been mostly quiet the last few weeks.  I'm predicting ten to twenty percent less sales than last year, and the news media quietly sitting there and avoiding the questions over why.

I noted that a report came out yesterday....over internet addiction.  Hospitals are saying that their addiction programs for internet users are up, and lots of customers coming forward.  Basically, they end up putting in some wing....with no internet access, and weaning you off the stuff.  No text messages, no pop-ups, and no Facebook activity.  The curious thing is that you have to pay for this service.  I'm assuming under the new Affordable Healthcare Act....it's all free with that.  Pretty sad service....if you ask me.
at Wednesday, November 06, 2013 No comments: