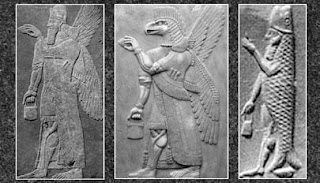 Over the past five years, I've come to be fascinated by stone carvings which display a guy, with a 'hand-bag'.

People could point this out from carvings in Egypt and Iraq.  But as time went by, the carving showed up in the Americas, Asia, and even cliff drawings in Australia.  The bag scene even shows up in Turkey at the new site of Gobekli Tepe (oddly enough, just the bags....not the guy holding the bag).

So I've come to ask myself some questions.

First, why so many points around the Earth?  Maybe you could make up some excuse if this were just a 1,000-mile circle from Iraq....but to find this virtually every corner of the Earth?

Could it be some guy who was just a traveler and made up some fake legend story, and convinced folks of important people existing with handbags?  I've contemplated this....mostly because it's so easy to convince folks of a hoax (like Bigfoot).  Oddly enough, no matter where you find the image in stone....it's always the size of a lunch-box.

Stone characters being women with the hand-bag?  No.  So far, I've yet to find an image where it's a woman.  It's either men, or animal-creature men.

What's in the bag?  The images never convey that part of the story.  It must be important to identify the guy carrying the bag, but the contents are not that important.

All made around the same time?  This is harder to say or prove.  In the case of Gobekli Tepe, it has to be less than 12,000 years ago.

Did the stone-carver actually see these folks, or simply get a description handed down....maybe five to ten generations later?  So when folks talk about the bag....maybe it was originally a backpack, and the story got shifted around to identify it as a purse instead?  Well, that's possible.

Are the bags ever seen just by themselves, and not carried by some VIP-dude?  Well, the only images I've seen so far is the Gobekli Tepe site where multiple bags are put onto a statue indicating great chaos, or on some Australian rock (drawn by an Aborigine).

Are the bags even significant?  This is debatable.  Obviously, the stone-cutters thought they were.  But you never see an image where 'Joe' is removing something from the bag.

If the size is realistic....what would the VIP-due carry in a lunch-box size bag?  A Snickers-bar, bag of peanuts, a Mountain Dew, and a deck of cards?  Maybe it was just some aspirin, band-aides, and bug-repellent?  Maybe his communications device, a laser-gun, and a bottle of gin?

So I come to the end of this essay.  It is rather odd that 500-odd stone-carving experts, across the globe, without the ability to send images....came to chip out these carvings....all with the hand-bag guys.  Accidental?  No.  That's the one element to this story that you can cross off....you couldn't have 500-odd guys performing the same accidental visual representation.

It'll just remain a mystery until someone digs up the statue or image of the hand-bag guy pulling something out of the bag.
at Sunday, August 04, 2019 No comments: