How long would this go on?  The basic idea is six months of 'free' money.

The one key thing that stands out?  Well, CBO has not analyzed the total cost package and you have to figure that six months of this....would go up near a trillion dollars.

Odds of passing?  No one is really saying much about that.  Getting past the House is not the problem....convincing the Republicans in the Senate to agree to this, or getting Trump to sign the document....that's another story.

I suspect in the end.....some agreement will occur, but the amount goes down to $1,000 per American, it halts after three months, and if you make more than $40k a year....you get nothing.

But lets go to the max fantasy....a family of five (two kids over 16), and they are getting $8,500 a month.  Basically, if this were me.....I'd take that six month period off and just find a good cheap hotel deal in Vegas for six weeks out of that, and maybe tour Arizona for another six weeks.  In effect, I wouldn't worry about working.
at Tuesday, May 05, 2020 No comments:

There is a story or two out there....that this new appearance in North Korea of Mr Kim....is really a fake guy....a lookalike?

Potential?  Well, it's way out there and you'd have to laugh about the suggestion.

Logic to it?  The real Mr Kim is dead, and this is an act to keep the government intact.  Beyond that?  Unknown.
at Tuesday, May 05, 2020 No comments: 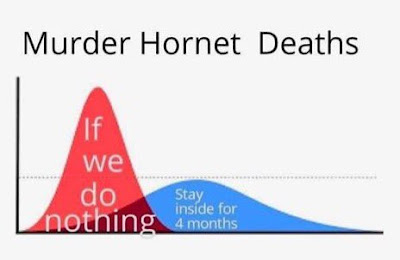 Someone went and did a 'worry-chart' for the new Asian hornets existing in the US.

So, what we want to do is flatten the potential death rate.

Two choices.....do nothing, or everyone stay home and inside for a minimum of four months.

What?  You've practiced this routine a bit and know the 'drill'?

Here's the best part, the government will eventually get stupid enough....to issue a $1,200 check to each adult, with the check called the Asian hornet stimulus check....signed President Trump himself.

And the cherry on the cake....some task force is being formed, with opposition from the Democrats.  Daily reports?  Yes.
at Tuesday, May 05, 2020 No comments: