Across the river, and on the other side of DC....into Maryland, is Silver Springs.  The local guys there, about a decade ago, got the city government talked into constructing this magnificent transit center.  This multi-floor contraption.....called the Paul S. Sarbanes Transit Center, was going to be the end-all solution to Silver Springs issues.

There was to be a huge open bay area for buses (34 spots), and be tied right into both the Metro and even the Maryland rail system.

You were going to be able to drive right in, and dump your passenger, and drive right out.  There's a great deal of engineering tied into the look and feel of the center.

The cost?  Roughly one-hundred and ten million....more or less.  Construction started in 2007.

I guess you are wondering about the end-date?

Well....that's really the issue.  Whoever drew up the plans....didn't really make it clear where you needed reinforced concrete, and re-bar.  The experts yesterday laid out the issues....it's just not strong enough to allow buses (in any number) to drive onto the terminal and drive down the next level.  They now admit.....you'd sit there and wait for a collapse....sooner or later.  Billions could be at stake in insurance claims if four or five buses fell through. 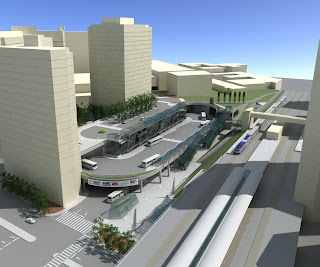 The fix?  The TV news guys simply laid out the issues and left it there last night.  It'll take months of study to reach some conclusion.  No one wanted to say anything, but I got this impression that they just might admit that the whole thing ought to be torn down and restarted.

As you look at the drawing on the right of what it'd look like at completion.... remind yourself that physically  it's almost ninety percent done and would have opened this year.

I'd hate to bet against it, but I'd be guessing a 2017 opening....with half the building torn down as a minimum

Folks going to jail?  It never happens in Maryland.  The company that did the drawings will likely just walk away and declare itself renamed or bankrupt.  Folks in the construction zone will likely complain loud and long....they've spent almost several years waiting for things to be done.
at Wednesday, March 20, 2013 No comments:

This is a story that you'd hate to hear about or discuss.

Local kid....sixteen years old....decides to sneak out of the house one night....go booze up and party with his associates.  He's staying at his dad's house (divorced situation).  House is in the nicer neighborhoods here in Virginia.

The kid parties and drinks up a bit.  Then somewhere after midnight....he comes back to the back of the house....hops the fence, and misjudges his house for a house two houses down (they are all built the same way and look similar).

The kid opens a window.

The real owner of this house.....up on the second floor....gets up and flips the lights on.

The kid thinks he's still in the right house, and just progressing up the stairs.

The owner has a gun, and is yelling for the kid to stop.

The kid is shot dead.

Cops come.  It's a very long look over the mess.  It takes hours to really come to some sorting of facts.  The dad is called.  A fairly traumatic event.  Cops finally lay out the whole episode.

There's doubt if any charges will occur.

The kid's family has come out and said they forgive the older guy who shot the kid.  They can understand how this all came down.

The mother?  She was in the local area today.  She lives in Indianapolis and kinda admits that neighborhoods there are a bit rougher, and she felt the son was safer with the ex-husband, than in Indianapolis.

You feel sorry for the kid.  But on the stupidity scale....he was pushing a ten.

The guy who shot the kid?  He's sitting there and asking himself how this all happened.  If he'd locked the windows correctly....if he'd just shot the kid in the leg....there's probably a dozen ways this could have gone another way.
at Wednesday, March 20, 2013 No comments:

A Few Seconds Over the War

Ten years have passed, and this week is a big hype on the Iraq war.  I'd say that fifty percent of MSNBC over the last day or so....has simply been war talk, period.  CNN has done various pieces today.

I generally go back and make three basic observations.

First, no one ever disagrees about our involvement in going into Afghanistan.  We probably did screw up in allowing the Jihad guys to walk out the backdoor, and simply prolong this whole episode while sitting in Pakistan (a place that is simply not to the ends of the Earth).

If we'd made the whole war about the Islamic radicals....things might have gone in a different way.  But the guys in DC just couldn't make it a fight over radical Muslims.

Second, let's imagine no war in Iraq.  Saddam would still be in charge today.  Qusay and Udah, his sons, would be running the day-to-day operations.  It'd be a miserable atmosphere for fifty percent of the country, and there's likely thousand Iraqis a year who would have disappeared under the continued regime.

Neither the Kuwaitis or Saudis would have been happy with this, and both would have been forced to accept continued US troop operations in their countries.  The radical Saudi folks would have been greatly infuriated by 2010.....with US troops walking in public situations.

The Iranians?  They would have focused on military options to use against Saddam, not spent so much time working on nuclear options.

I won't say things would be better or worse in this case.

Third and final.   Yeah.....there's a hundred-odd billion that got spent on DoD, Iraq, or the war business. It's a lot of cash, and other than some nifty developed toys like drones....there's not a lot to show for it.

Did the New York Times spend days and weeks discussing the Cuban missile crisis a decade later, and the mistakes of the Kennedy administration?  I doubt it.

Did the newspapers cover the end of the Spanish-American War and it's terrible impact a decade later?  I kinda doubt it.

Did US news sources cover the Grenada campaign a decade later?  No, not really.

Basically, there's not much for the news folks to cover, and the audience is rapidly losing interest over just about everything.  Maybe that says something about the way we've become.
at Wednesday, March 20, 2013 No comments: