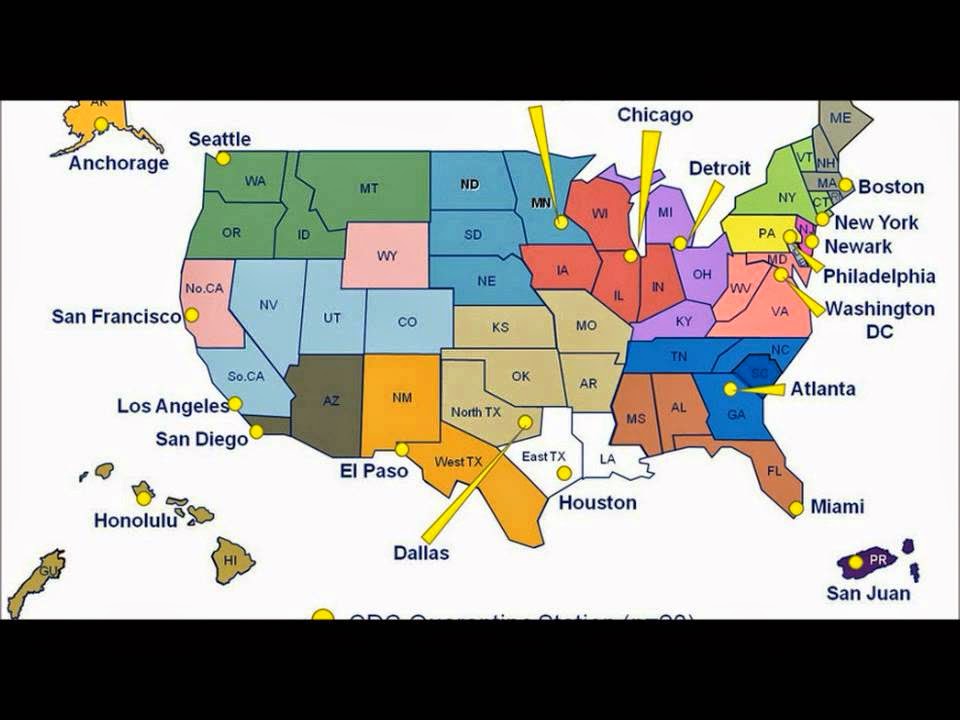 This is a map of the US government's planned Ebola quarantine stations.

A smart guy would look at it for a while, and then start asking questions.

First, you might notice that most of the stations are in the northeast....rather than planning a station in every region itself.

In the entire south, there's just going to be two sites....Miami and Atlanta.  Texas?  Three.

They attach your state to particular quarantine station.  So....if you live in north Bama....and Uncle Karl comes down with Ebola....the idea is that someone is going to transport Uncle Karl by truck, car, aircraft, etc.....to Miami.  The drive?  Figure twelve hours.

The whole northwest?  You would have to be transported to Seattle....even if you live clear out in east Montana.

If you read into the text of the whole plan....these quarantine stations are kinda developed with the idea that they could expand....but there is a limit to safe operation of such camps.  Even if you threw 3,000 National Guard troops into this mess...I'd suspect that a quarantine station can be maxed out at 10,000 patients....either passing away in two or three weeks....or somehow by the grace of the almighty surviving (figure a 10-percent rate of survival).

The chief job of the National Guard guys?  Probably to make sure you get dumped at the camp once pronounced with Ebola.....ensuring the doctors inside don't leave for any reason....and burying you as quickly as possible in some mass grave structure that they've already figured requires one bulldozer running full-time and around the clock.

There's another piece to this odd puzzle.  I watched a brief interview the other day and the expert said that there was plan A.....and that was it. The journalist asked if such-and-such happened....how would the plan evolve.  And the expert said that there's just plan A....NO plan B or plan C.  If things go beyond a certain point, there's no need for plan B or C.....at least by my interpretation of his comments.

If you had some relative with the Ebola....would you agree to let them grab the relative for the quarantine station?  That's another good question.  In Bama....I could see some folks apprehensive over letting some convoy operation come up and take your relative all the way down to Miami.  The trip itself?  It'd probably kill most folks in a severe weak condition.

The order into quarantine?  I'm guessing, because so little has been said on the issue, that each county health department has a form letter which a doctor will sign, and a judge will stamp....thus throwing you into a federal quarantine program.  Course, this brings up the question if you just came in contact with some guy at the Piggly Wiggly with it, and if they'd sign the paperwork to send you off to Miami....just based on that two minute conversation you had with the inflected guy over pontoon boats and rafting.

So, you can imagine yourself....having four burly national guard guys show up at the house....with paperwork....and seize you to go off to Miami.  You get one bag and maybe a cellphone.  Laptops forbidden?  I'm guessing they wouldn't want you Facebooking out of the quarantine camp over your one-star marginal conditions or the lack of food.

If you survived the Ebola....at what point would they turn you loose from the quarantine camp? Two weeks?  Two months?  Six months?  No one has said much over the point of where you survived and aren't contagious anymore.   Could you catch it again?  No one says much over that idea.

Boozers and smokers?  They might find it difficult in the quarantine camp.....ample regulation to limit them on everything.  Even if you were in the suspected camp and not the sick camp.....you just might not be getting an opportunity to buy smokes.

The number of people who would just decline to identify themselves or just start hiding out in the woods?  I'd take a guess six months in an epidemic....fifty percent of the folks in Bama would be armed and refusing to be taken to any camp....anywhere.

So, not that I'm pessimistic or anything....Ebola Plan Number One....probably will be rated with the Affordable Health Care Act, and found to be a marginal successful failure.  Although, you won't be able to blame this one on the President or an incompetent congress or senate.