Bacon as a Topic 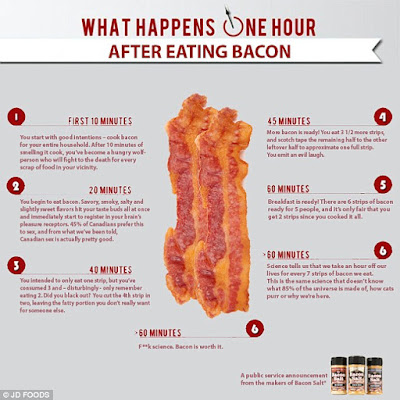 Last week, I noticed the anti-Coke graphic....which really got down into the negative aspects of Coke in your diet.  It was an interesting graphic, and based on the science.....it's kinda true.

This week, the bacon crowd came up with their own graphic.  They tried hard to make it sound anti-bacon, but it's pro-bacon all the way.

To be honest, I have an addiction to bacon.  If you gave me the choice.....I'd buy the least-lean bacon possible....with extra fat.....and cook up six to eight slices.  Forget the crispy stuff.....I want the 'bad' stuff.

Does the bacon 'mafia' know this factor?  Yes.  I suspect they meet quarterly, discuss the sales strategy and work hard to keep guys like me hooked to the greasy product.  You can imagine the guys sitting there.....talking up the grease and bad health aspects....then grinning....and finally getting to the new science of adding more fat than normal to the product.

The Past and the Future

There's a study completed by a mapping service in the UK.....with 2,000 people participating....which kinda determined the top twenty skills....essential and time-honored skills.....that we are losing because of innovation and advancement in society.

- Reading a map.  Since GPS came along, most people don't think about maps....they just plug the location into the computer and it guides them there.  The basic idea of north and south?  Dissolving.

- Using a compass.  You could probably go to a hundred people today, and less than five will admit they've used a compass in the past decade.  Fifty years ago, it would have been something used on a regular basis.

- Knots.  If you went back a hundred years ago....there were probably four or five knots that most people knew and could tie.  Today.....out of a thousand people....maybe ten might know enough to remember two or three knots.

- Wiring a plug.  If you finished school in the 1950s or 1960s.....you probably had some introduction to this.  Today?  I doubt if more than three or four kids might be taught the skill of this simple act.

Then you come to this one unique skill set....writing letters.  The truth is, we are shifting over to email and losing the skill of a simple one-page letter.  In the 1840s, you might have mailed one single page to the relatives back where you grew up.....half a world away.....describing the trials and accomplishments of the year.  You'd fill up the entire page and then briefly end it.  This is a skill that we are losing today.

It's worth reading the article and pausing over the effects.  Society is in an evolutionary stage.  Skills that were critically important twenty years ago.....aren't important today.  Tires are built in such a way today that flats are very rare.  Some guys might wake up one afternoon to discover a flat, and some ultra modern 'jack' sitting in the trunk.....which they aren't familiar with the method of using it or how to secure such a jack to the car itself.

It is something to ponder.  As much as we are advancing.....we are also dumping skills along the side of life, and thinking they will be of no use in the future.