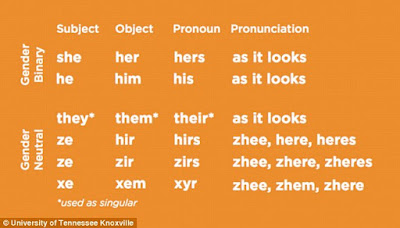 I've tried to make sense out of this....probably wasting an hour reading and pondering.

The University of Tennessee of Knoxville.....has a hired gay-rights person as part of the school staff.  With the new semester starting up....there's been this slide to come out and let students and staff know the 'agenda'.

There are 'code-words' now for gender neutral folks.  If you were using the normal word of 'she', then it'd be gender-neutral to use 'ze' instead.  If you get into grammar rules.....there's always an object, a pronoun, etc.

Naturally, once this came out.....there were a fair amount of negativity.....since this isn't a nationally recognized thing or a state-mandated thing....a fair number of folks (students) were against this.  Quickly, the chancellor of the university came out and said that this would NOT be mandated or forced upon anyone.

Where did ze come from?  That's not completely clear.  From some readings, I've come to realize that dozens of countries and languages....have various ways of dealing with he or she, in masculine terms or otherwise.  Word experts appear to always have fits in grasping a way to describe something and it must fit within a rule-scheme.

As for the introduction at the university?  Here's the thing.....in most cases.....mom and dad are sponsoring Jennifer or Bob Junior and probably paying the Knoxville crowd around $70,000 for their education.  On top of that, there's another $50,000 going to the Knoxville community, booze industry, clothing appeal shops, and court establishment for fines or issues.  It's a large sum of money and they just want that kid to graduate in four years, get a real job, and appear to be successful.  The concern of mom and dad over Xe or Ze?  Almost zero.  It's not helping them pass some class in economics, nursing or engineering.....it's probably not important.

If you go back a hundred years, and showed up at any state-run university in America....the emphasis for the four years included some introduction to Greek, simplified debate classes for each year, and a small amount of engineering-related classes.

How long will this new grammar stuff stay around?  I suspect that the comical side of college life will drag this along as an anchor, and a large segment of the university will take this as a joke.  They will use the new grammar for test answers and get the professors all tangled up in grammar usage.  No engineering professor is going to buy off on this, and eventually.....each department will come out with it's own accepted usage of English.  And when some electrical engineer professor starts mandating acceptable English.....you know you got a problem.
at Saturday, August 29, 2015 No comments:

I noted this week....out in Berkeley City, California.....there's a proposal going up by a city council guy to ban the sale of tobacco (smokes) to "youths" under the age of 21.

Naturally, this all goes along with some noted increased in underage tobacco use.....part of which relates to e-cigarettes (becoming more popular now).

The proposal will arrive for the whole city council to vote on in September.  No one says much over the remaining members of the city council or if there's some public out-cry over the business.

I'm humored by the term "youths" being attached to anyone from age eighteen to twenty-one.  These are all people allowed to vote, purchase and own weapons, enlist for the military, get student loans of $100,000, obtain credit cards and get heavily into debt, and marry without any interference from Mom or Dad.

Personally, I wouldn't mind if they were stupid enough to draft up something like this....to just go ahead and say a bunch of things are off-limits for this youth group.  If kids are that stupid to smoke and you think it's bad....why aren't they that stupid to vote for silly reasons?  Why would you allow an immature 18-year-old gal to marry an immature 20-year-old guy?  Why grant drivers licenses at sixteen?

What happens when the Berkeley City council passes this?  Simple....a couple of guys start walking around in the area and selling black-market smokes.  You charge ten to twenty cents profit on each pack and the underage punks go ahead and pay the extra costs.  Or they drive fifty feet beyond the city council authority and buy from a non-Berkeley dealer.
at Saturday, August 29, 2015 No comments: