I don't what triggered me to get onto this topic.  I probably spent ninety minutes today looking at various TV news segments on YouTube.....which readily featured crisis actors (fake victims at such-and-such scene).  It appears that most news networks use the crisis actors and it's fairly acceptable.  CNN seems to have a significant amount of usage.

The slant on this is that the networks want some simple message....some theme....some words that will fit their motive-for-the-story or view of the incident.  Just having regular people comment....might not give you the right impression to fit the network's take on the situation.

All of this made me go back for a brief ten-minute reading of the synopsis of 1984 by George Orwell.  This is about the 4th time in 2017 that I've gone back to read the synopsis of the story, and relate it to obvious events in the world.

After a fair amount of pondering, I came to four essential questions:

2.  Just how much of these protest actions, political stories,and sports shows are faked?  When CBS did Hillary Clinton primary coverage in 2016.....did they use actors to convey their loyalty to Hillary?  Did MSNBC use actors to convey an anti-Trump slant in August and September of 2016?  Did ABC use actors throughout the whole eight years of President Obama?  There in Iraq and Afghanistan....did CNN hire crisis Iraqi guys to do fake interviews?

3.  How much can you make as a crisis actor?  Is this per-hour, or just for each appearance?  Is it cash or they actually keep you on some contract deal?  Could some guy do this locally, at the state-level and nationally?

4.  Where exactly does this end?  This question bothered me the most.  You could sit and watch some school shooting episode unfold and come to get twenty-two eyewitness individuals comment about the shooting....then find out a year later than sixteen of the individuals were crisis actors....some worked for even two news networks.  Does your perception start to go south?  Can you trust anything at this point?
at Monday, August 28, 2017 No comments: 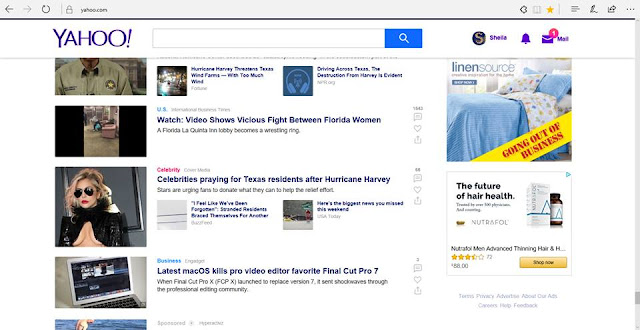 I had a former co-worker who pointed out this story on Yahoo.....celebrities who said they were praying for Texas residents after the Hurricane.

To be honest, I sat looking at the sun-glasses gal for a while and her lack of a bra.

Then I came back to the prayer business.  Most celebrities are fairly fake and if they said they were praying for you....that might mean they tossed back three cocktails and then asked the bartender where Texas was located and if he could make a really good Texas-related cocktail.

Over the last decade, I've lost a fair amount of respect for celebrities.  It doesn't matter if they do comedy, pretend to be cowboys, or sing freaky songs.  I think a few number of Americans are mostly amused by the pretender-status of these folks.

As for the bra-less gal?  Yahoo always makes these into such tiny photos....that's there's not much to imagine upon.
at Monday, August 28, 2017 No comments: