This Thursday evening in Alabama.....Judge Moore and Senator Luther Strange will appear on a stage for a debate.....a one-of-a-kind-no-moderator type of debate.  It's the chance to hear both speak....for the primary episode to reach the election between the two....and a Democrat challenger.

On the dramatic front....Moore has probably more debate skills than Strange....maybe two to one.

How this will go? My scenario runs this way:

- Judge Moore will lead off with a condemning statement.....saying that Strange has sinned more than the normal guy.  Then as his last minute comes up....he'll lead off with a prayer to the good Lord to forgive Strange of his sins.

- Senator Strange will be standing there in a pained-look...trying to imagine some comeback, but he can't deliver.

- Judge Moore gets the next round and goes right back to condemning Strange.  Then praying for Strange again.

- At home, thousands of Alabama folks will be weeping away at the tactic.

- Then Senator Strange finally gets a vision.  He falls on his knees and starts some prayer asking for forgiveness....then notes that first-stone business in a glass house.....he who is without sin, etc.  Then he wraps it up with some badly mangled Deuteronomy quote....using the Old Testament to whack away at Moore.  Strange jumps up....does a laying-of-the-hands on some guy in the first row....healing them of something, and the guy runs out of the studio.

- At this point, Judge Moore is screwed.  There is no comeback. 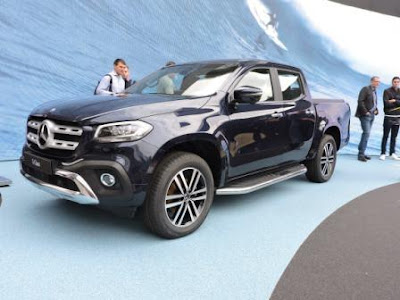 I went off to the Frankfurt International Car Show today.  Lots of innovation and new trends.

So I turned a corner, and here is the new Mercedes pick-up.

It is a great vehicle.....lots of power....high quality seats that flip to six different settings or tilts.

The thing is....because of the cost....what guy would really want to go and put farm-like cargo in the rear?  Looking at the US market?  No doubt. 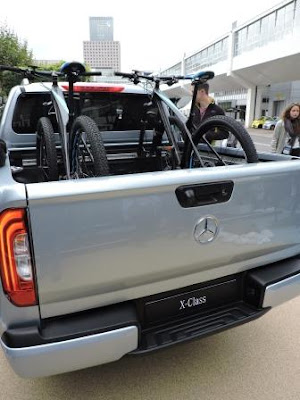 Then I came to this deal in the rear....a bike-transport rack.  It's hard to imagine any farmer getting some idea to haul bicycles around with this type truck.

Cost?  Way more than most folks would pay.

Maybe if you were a fake southerner with some high-class professional pay situation and just wanted a status symbol in your driveway to impress the neighbors....it'd make sense.

If I brought up with my brother...he'd go over the stats and be impressed with the power and look, but he'd give you ten reasons why he just couldn't go and haul hay or cattle feed around with this.

How many will sell per year in the US?  You just don't know.  It might be a trend.