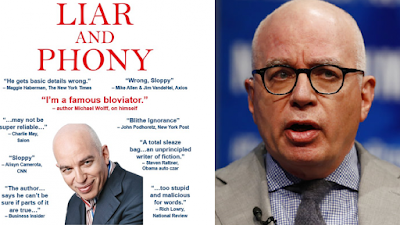 I've sat the past few days and looked over this book which mostly quotes Bannon's opinion on President Trump.

1.  The book company who paid Wolff?  Well, you track it through the system, and eventually come to the real mother-company....Bertelsmann.  It's a German company.  It probably doesn't really matter, but it's just a curious footnote.

2.  Up front, Wolff has kinda admitted that he really never checked out a lot of the comments made, so the reliability or value of the comments....well...it's marginal.  Maybe Bannon did say these things but if Bannon is nuts (as I'm often told by MSNBC), then Wolff is quoting a nut-case. What good is that?

3.  The suggestion that dozens of White House employees are lined up to quit after the book came out?  I heard that on Wednesday. One of the news media networks hyped this.  Why?  It's a marginal sense that they give, and after hearing it....I started to laugh.  It's like the 10,000 other things spoken about over the last year that simply never came to pass. The idea that Rex would quit by such-and-such date, or that Sessions would resign?  None of them ever came to pass.

4.  Why did Steve Bannon talk like this?  If you were really adapt at playing poker, you never sit and lay out your details to other poker players, so it makes little sense.

5. Will the book sell outside of the beltway?  I have my doubts.  There might be a hundred-thousand books sold in the first month, and then?  It'll drop like a rock.  I doubt that Bertelsmann will make much more than a break-even point on the book.

The funny part to this story is that it's a ten-day story at best, then it'll dissolve and be replaced by the next big mess in DC, or some Supreme Court judge retiring, or some KGB agent found in Cleveland, or some drunken Senator falling out of his chair.
at Saturday, January 06, 2018 No comments:

I noticed this story pop up today....via the Star Tribune.

So the company....Life Time....which is a fitness studio operation throughout the US....sat down and analyzed the general public and made a serious decision.  They cut news networks from the screens of their studios.  Quote: "They don't fit a healthy lifestyle."

At some point in my 'fitness-years' (up until the end of 1998), the military gyms were starting to put TV screens up and you'd show up to use one of their thirty-odd bike-machines at 6 AM.  They would run videos that were mostly landscape biking tours.  It was supposed to get you relaxed.

If you go to any of the fitness centers around the US today....most all will run some news program and it either helps or hurts the client enthusiasm.  I read a piece in the summer of 2017 where some gal got all fed up that the local club only used CNN, and she basically quit the fitness club over this one-channel only policy.

My guess is that Life Time management probably got numerous complaints about the choices of channels and tried to rotate them....to make everyone happy and unhappy, and eventually decided that this was all a stupid and stressful part of their business operation.

Now?  No one says much over what will be over the screens.  My guess is bike-tour landscape scenes.

But I would go and suggest that airport TV selections will be next.  Most airports that I've walked through in the past five years, are bound and determined to run only CNN.  I've reached the level where I'd rather not watch news in airports, and I think at least a third of population is going in that trend.

Are we sick and tired of news?  Yes.  I think the overdose trend has been building up for a decade, and the public needs some relief.
at Saturday, January 06, 2018 No comments: