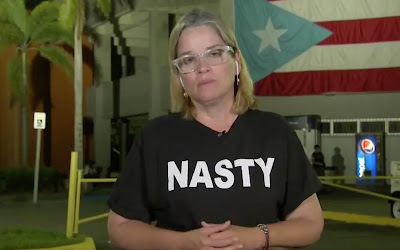 In the last two weeks, the mayor of San Juan, Puerto Rico, has made it into the news almost daily because of events there and the anti-Trump theme.

Yesterday, she did an interview wearing a 'nasty' t-shirt.  It's supposed to be some kind of message, but it's hard to say what.

Typically, you were appearing in front of me, in some leadership role or executive role....wearing a t-shirt saying 'nasty'...I would likely have tainted or misguided thoughts.  For some reason, the image and 'nasty' would burn into my my mind.  After that....every time I saw the person...I'd be thinking 'nasty'.

Forty years ago....no mayor would have gone out and worn something like this, period.  Today?  It's a provocative lifestyle and people want to entice you or draw you to some fake conclusion.

After a while, you look at the whole image of the photo, and then you latch onto the Pepsi machine on the right-side of the image. "Nasty" and Pepsi?  A subliminal message?  Something to do with titillating or wicked thoughts?

Now I'll start thinking something sensual every time I see a Pepsi machine, and think of the word "nasty". I'll probably have to go and visit a mental health expert now.
at Friday, October 06, 2017