I noticed this in the news this morning, which worried a lot of folks. 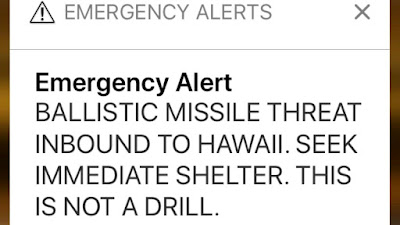 The basic story is that in Hawaii...because of the North Korean missile business....they stood up a system to warn the public of incoming missiles (if it should ever occur).  Well....some guy hit the 'green' button and for thirty minutes across Hawaii....the alert said that there were missiles coming in.  It noted.....THIS IS NOT A DRILL.

From my Air Force period, we had two typical emergency warning episodes....one would always hint that this was an exercise or drill, and the other would openly state....this is not a drill or exercise.  You knew what you were supposed to do in the fake warning and the real warning.

In this case in Hawaii....folks saw this on the TV and heard the internet chat, and got freaked out.  I think they finally got a dose of reality, in that you actually need to worry about this North Korean missile business.  It could actually happen.

Course, another thing came out of this.....it simply took one single guy to make a mistake and activate the alarm.  No one has said how he made the mistake or if this was just a new guy problem, or if the button is too easily turned on.

This also got everyone hyped up on Saturday...like the Pentagon, the FBI, the missile-watching folks....all of them had to stand up and say that they were monitoring the episode and were 'vigilant' (even if they weren't).

This of course then triggered CNN to ask how the US military would track missiles IF THEY WERE LAUNCHED.  So everyone got this mega dose of military explanations about missile launches, satellite tracking, and geometric-chat....most of which is way past the understanding level of approximately fifty-percent of American society.

Then it also forced interviews with Hawaii state folks to explain what the hell they would do....IF there was really a missile hit on Hawaii.  They pulled out some checklists, noted the emergency response plan, and mostly hoped that more intensive questions didn't occur.

Somewhere out there, there's some Hollywood producer noting all of this and racing now to produce a script and convince CBS to make a movie for this fall entitled...."Doom Over Kepuhi Beach", where a nuke missile has slammed the beach and failed to detonate.  Racing to the scene will be 'Buddy' (David Hasselhoff playing a down-and-out former CIA guy who is a PhD electrical engineer and part-time marijuana-farmer) and 'Micky' (Cuba Gooding Jr, playing a retired Navy Seal who mostly drinks in the afternoon to excess and runs a coffee-shop).  Together, Buddy and Micky disarm the nuke missile, save Hawaii, and get a heroes welcome at the White House by President Trump, who refers to the potential nuke blast 'would have made Kep-U-ALL beach a sh**-hole live if it'd gone off'.  Hawaiians will be furious over the mispronunciation of Kepuhi by Trump, and that he suggested sh**-hole status on a beach if a nuke had gone off.
at Sunday, January 14, 2018