To be honest....I ain't never been to the top. They built it fifteen years after I left....and other than just driving by it....and gazing at it....I haven't eaten any vittles at the top.

Most of the locals think that it was a total waste of money......and ninety percent of them have never been up to the top. To be kinda honest....to just sip a coke...it'll cost $3....and that just ain't worth a sip at the top. I can just as well sip a coke over at the gas station for 99 cents.

The thing is....it overlooks the Tennessee River....and if you are there along sundown...its a mighty fine view of the river.

And for you corrupt political hacks who offended by my blog commentary....please feel free to add your corrupt commentary after mine. I'm alway open to corruption and its poetry.
at Saturday, June 07, 2008 No comments:

It was a wonderful Thursday night in Bama....for Richard Scott Odell. In fact....things went along so well...that he continued partying till Friday morning, until some guy in a car drove by Richard who was out in the middle of Bama highway 79...standing there....naked. The guy in the car though this was odd...not normally seeing a guy in the early morning hours in the middle of the road....naked.

The Jefferson county cops came by.....and tried to talk Richard into just laying on the pavement, but he thought that was just not necessary. So the cops stunned him...once, twice, three times....and in fact....four times total....before he got settled.

The best we can say...the cops say he was dang intoxicated....and stated to them that he was Jesus Christ and President Bush....and that he had the power to break free of the cuffs.

Sgt Randy Christan later said...."It isn't everyday that our deputies run into a naked man standing in the middle of the highway."

So far, the charges are rather simple...resisting arrest and disorderly conduct. I'm thinking 30 days in the county jail...at the very most. Although....impersonating the president of the United States...as we've leaned from this experience....is not a crime. So if you ever had a desire.....or just a wild idea....go for it....the cops can't say a word if you claim to be President Bush. You can even claim to be a space alien...and they can't charge with a single crime. Just don't stand in the middle of the road in the midst of Bama...naked....in the early morning hours....thats going to get you some jailtime.

Email ThisBlogThis!Share to TwitterShare to FacebookShare to Pinterest
Labels: bama 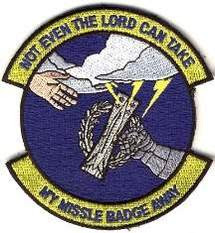 It is an amusing bit of history that occurred within the Air Force this week. As Secretary of Defense Gates was firing the four-star general in charge of the Air Force....the 4-star...General Mosely....had signed off on a historical document earlier in the week....which rightly fits into the entire mess of his firing.

Somewhere in the midst of 2005....after dissolving SAC....and dumping the bomber and missile crowd into the Space Command....the leadership of Space Command decided that the old SAC Missile Badge that all of the Nuke maintainers had worn for years and years....was to be replaced by the "Space Wings" badge. There was a huge amount of fury by the nuclear crowd. They had earned their badge and proudly worn it for 30-odd years.

So in the months after that....some graphic artist within the nuclear crowd there in the Air Force....took their old badge....and inserted graphic design, and a little sarcasm (Not even the Lord can take my missile badge away). This graphic was proudly displayed in non-obvious places and every single nuclear technician considered part of their glory. It made a very big point.

So this week....to fix one of a thousand things wrong in the nuclear mission of the Air Force.....amongst what was written up after the famous missing nukes episode.....and not even allowed to be the space command commander's decision.....General Mosely decided to give the Nuclear Missile badge back to the boys. He signed the paperwork this week, and it will be authorized to wear again. Me? I'd prefer the badge above....to make a very big point on the "change-the-change-to-the-change crowd". Its an amusing end to General Mosely...having to admit a number of things that they've done stupidly for the past eighteen years.
at Saturday, June 07, 2008 No comments:

I wanted to introduce you to the new hell for environmentalists. Its a brand new technology. These guys say that they can capture the carbon emissions from your car. Yep....actually capture those evil C02 emissions. Origo Industries says that they can capture the CO2 from your vehicle’s engine and then allow you to turn these emissions into fuel at your own house to re-power your car. And here is the kicker....the release of this C02 stuff at the house....could also be pumped back and used to power the house too. And how? The gadget uses this idea where CO2 is regenerated through algae in a home unit, allowing the user to produce bio-oil (up to 500 gallons a year...more or less).

Of course....I always bring good news/bad news. It would take valuable C02 and create a C02 shortage. Yes, the evil that an environmentalist would weep about. We’d have to create carbon taxes on these devices...and make these people pay for their crimes against the Earth. Lack of C02, would bring on global cooling, global warming, climate change, and maybe even another Rambo movie. We might starve or overfeed our society. Take your pick...in any fashion...its a bad thing.

It doesn’t take an idiot to see through the Green vision of life...and grasp that the end result has nothing to do with a better earth...just a more distributed system of wealth. It’s Robin Hood a thousand times over.