Boots of the Day 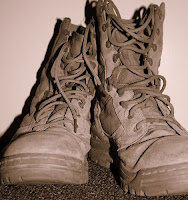 Today, in the Air Force times....they let everyone know that we are about to move from the desert boot era (which barely began three years ago)....back to the black boot era (which was the norm for decades).

I kinda predicted this when I first heard of the switch three years ago. I myself....don't give a damn. I've been retired for almost ten years now. But its the amusement of the fighter pilot mafia which does the "change-the-change-to-the-change-of-the-change" every year or two.

This is the world of the Air Force today.

Why switch to the desert boot in the first place? Well....AF folks were going to the Middle East and the black boots were getting every bit of black sanded off. So it merely made sense to have a desert boot and just forget about pretty boots.

The problem came when the clean and tidy crowd saw the new desert boot as untidy and not presenting the right image in public. So we move back to the old boot.
at Tuesday, July 08, 2008 No comments: