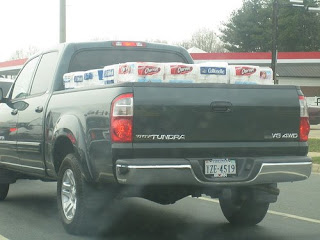 Today....the The General Services Administration, which is responsible for managing federal property, came up and admitted that they screwed up on the accounting part of FEMA gear....namely cases of toilet paper, plastic sporks and other cutlery....and maybe a bunch of other stuff.

There was a whole bunch of stuff that FEMA gave away, and the GSA dudes estimated the original value at $85 million....but damn...they were wrong....and it was closer to maybe $18.5 million.

Somewhere in this mess....there was some guy reading "each" instead of "cases" and then vice versa. The amusing part of this story is that the individuals involved were telling folks that they had tons and tons of toilet paper....worth maybe $1.5 million....when actually....it was $18,000. The same episode ocurred with plastic knives, forks and spoons...going from $6.3 million to $25,000. Then the GSA gal that speaks for the organization....kinda admitted that they would be checking to see if this was "normal" to screw up like this.

I got a bad feeling from this. These guys might have $500,000 in toilet seats sitting around....and then discover that its only $140 in toilet seats. Then we might discover that they had $50 million in dog food stored away, when we originally thought it was $80,000 worth of dog food. You have to wonder who hires these people and if they ever ask if they have math skills. My guess is that they all come from Florida and helped count chad ballots back in 2000.
at Tuesday, July 22, 2008 No comments: