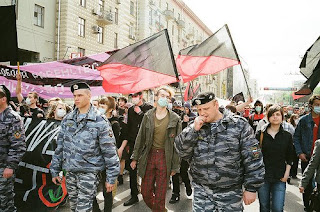 A group of anarchists came up on Monday, meeting in the heart of Denver, nd actually promised they would go away, if only Denver would invest the $50 million in federal security grants the city is receiving for the Democratic convention.....into the community instead.

I sat and paused over this act of great compassion by the anarchists. It shows they are kindly people and could potentially be the type to sit on my porch. Well....potentially.....but to be honest....the minute I realize they are anarchists....they kinda lose all porch privileges, and are regulated to the corner of the yard where the septic tank lies....and leaks.

This is my humble opinion. In recent weeks....some unkindly cops and county officals have decided that they can add "gas-fees" onto traffic tickets. I think this is crap.....but they say its pretty legal and just fair in getting their cop expenditures back. So I'd like to use this same idea and for a 30-day period in Denver.....offer a $1,500 arrest-fee onto anyone who is arrested for a disturbance with the city....as an additional fee...on top of the normal fee that the court would assign.

Adding to this....I'd like to assign a $15,000 fee to any guy arrested with a potential weapon in his hand during the convention....to include rocks and anything in your hands that weighs more than 8 pounds.

The money will be taken to pay for all the cops.....and at the end....any profit....will be used to buy all city residents free cable TV for as long as possible.

And to make this real popular? I'd like to have buses lined up in Chicago, New York City, Seattle, and Portland....to bring radical anarchists over to Denver....the more.....the merrier. No cash to pay for their bills? Then we just keep them in Denver jails until their relatives or friends pay.....with a credit of $35 a day for each day they sit there. I'm thinking they will think long and hard about the trouble they want to cause in Denver.
at Tuesday, July 29, 2008 No comments:

There was an excellent article from the LA Times today....which is awful rare to find such flowing information. They basically laid out a terrible secret that you probably didn't really want to know. Sadly....the millions that are spent on aircraft to handle forest fires throughout America.....are a total waste, with no provable results.

Its something that most folks have suspected for fifty years. Using aircraft to fight fires....didn't really take off until the 1950s. It was in the 1970s....where everyone starting demanding more money and more capability. When you look across at various states and the federal government....its a significant amount of money that they throw at this concept. The plus-up from this? Well....the cameras capture the pictures and folks actually think it makes a difference. The experts kinda smirk.....because the public now demands this action...with no true benefit.

I paused here and considered the America of the 1870s and 1880s....where fires came and went throughout the land....and no helicopters or aircraft dumped water or retardant on anything. The Chicago fire? Nothing. The London fire of 1666? Nothing. We basically got by until the 1950s.....without any real assistance. And to be truthful....its been only since the 1970s....that this "CNN-tool" has been active.

So if we removed aircraft as of today....and concentrated the money on firefighters and bulldozers.....would it be a better method of spending money? To some minor degree....yes. There is this amusing problem which everyone fails to understand. Millions of people have given up on living in the burbs and cities.....and now live a lifestyle out in the "burb-boonies", as I refer to it. They want to live rustic, but be within 60 minutes of their office, or a fancy mall. Its true in Colorado, California, Oregon, and Washington state. When you gaze across the Yellowstone National Park area....start looking at the locals who lie within a hour of the park....and pay $400k for a log cabin house and the twenty acres attached to it. They want that lifestyle....and they love fire territory.

We have a problem, which can only be fixed if we agree to leave the rustic "burb-boonies".....but that just isn't going to happen.

Perhaps a better plan on spending the money....is to offer up the aircraft millions for a scholarship program where young men and women agree to be firefighters....to get their education scholarship money. Put another 50,000 fighters up in various areas to fight the fires.....and toss in another two hundred bulldozers. Thats a better long-term investment. But don't worry....folks like the CNN shots of aircraft "saving" them.....so nothing is gone to change.
at Tuesday, July 29, 2008 No comments: