Dead Men Whose Lives Live On 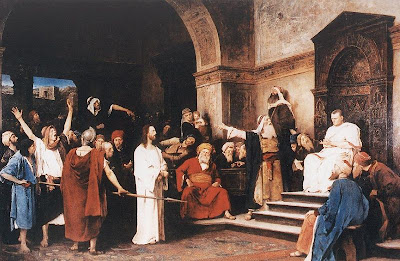 Over the past two weeks.....this fight over community organizers has erupted, with Pilate the Governor being discussed greatly. The majority of the being using Pilate, want to label him as a governor and simply walk away.

So I pulled the history of Governor Pilate. He is a Roman appointed governor, and thus had every resposibility of obeying Roman law. So when the local "law" showed up (the Sanhedrin), and accused Jesus of being blasphemous....it was a difficult position for a Roman governor to handle a religious figure

The short conversation that sealed the fate of Jesus, settled around taxes and the question of "Are you the king of the Jews?" asked Pilate. Jesus responded simply with "It is as you say".

With no exit or options......Governor Pilate followed Roman rules, ordering a sign to be put above Jesus as they mounted him on a cross. The curious thing.....is that Governor Pilate ordered the sign to say "Jesus of Nazareth, The King of the Jews".

The Sandedrin and local priests went into a fit.....protesting that the sign should have read that Jesus only claimed to be King of the Jews.

Governor Pilate apparently refused to change the sign charge. Most who have read the story and draw their own conclusions....believed that Pilate did something that countered the Rome standards of law and showed the only sympathy he could.....by openly admitting Jesus was the king of the Jews.

As this argument continues on with the community organizers and the McCain-ites....it becomes amusing that Governor Pilate is cast into a political campaign occurring two thousand years later. Governor Pilate was a faithful Roman governor, who obeyed the standards handed down to him. In the end, he earned a life-long bit of criticism and ends up being dragged through the dirt in 2008 yet again.

It is a curious world that historians live in.....where dead men get a second chance in life.....via the TV world and the media.

Alien Arrivals in Bama and Etiquette

With the forecasted arrival of a UFO ship on 14 October, as I discussed in yesterday's blog....I came to ponder exactly how redneck etiquette would fit with alien folks arriving in Bama via UFOs. It was a long ponder.

First off, southerners are usually friendly to all strangers and typically offer up comfort or aid to those folks visiting.....long as they aren't Yankees or Hollywood folks. Ifing you had a flat tire....we'd stop and offer up some help. Ifing you were thirsty, we'd offer a lemonade up on the porch. And ifing you were hungry, we'd offer you some mama's apple pie.

Second, we typically don't hold nothing against you until you've proven your stay just ain't that friendly. Southerners are typically smiling and fairly willing to overlook some of your sorrows or woes.....like being a Baptist, a Democrat, or a poker player.

Third, when we've hit our peak with patience....we typically invite you to leave nicely. And if you don't get the message....then we'll kick your butt out of town.

I'm thinking most Alabama folks will start out the first hour of the alien arrival with some apprehension.....kinda like when some Baptists folks claim some miracle down at the super-market or a voting trend to make the county go dry. Actually believing a UFO is hovering over Alabama just won't be a easy sell. Most folks will pack in the kids and drive 120 miles to show everyone.....so they all begin to accept facts. Even if Katie Couric says there's a UFO over Bama.....it ain't true until you've been there and seen it.

After acceptance, come the period where most folks want to know intentions....if friendly or otherwise. The problem of picking Bama....which I've pondered greatly...is that there are more rifles and shotguns per citizen than any state in America. If I were going to arrive somewhere to announce myself as a alien species, then Bama would be the last choice if this was a unfriendly situation.

If one were to go with a friendly situation, then Bama might be the best location to pick. Folks might kinda invite you up on the porch, offer up some ice tea, and some great pecan pie with ice cream on the side. They might talk up local politics, some religious discussions, and maybe even discuss alien sports....like NCAA football or such.

At some point, two or three months down the line...the thrill of having aliens around would kinda be like a presidential election period. You'd peak out, and when Arnie the Alien arrived on the porch....you'd just wave him off....telling him you were going to watch the Bass Pro Channel. After a week of this put-off, then the alien dudes would likely leave, real quiet-like. And that would be the end of the episode.....and we'd go back to football and wrestling.

Should the alien dudes decide a confrontational situation was more practical....I'm thinking their visit will be a bit short there in Bama, and their butt will be tossed as far out into space as we can possibly put it.

Finally, if there were some hot alien babes, there are alot of Bama dudes around that would be willing to go "sparking" with the alien gals....and show them the local marina, the catfish grill, their favorite Chevy truck, and the VFW hall. Things might heat up, and there might be "relations" although guys would be careful not to let the deacons find out or get in a "family-way". I'm thinking this would be the biggest worry of alien arrival. These Bama guys might let things get out of control.....and then we'd all suffer later.
at Sunday, September 14, 2008 No comments: