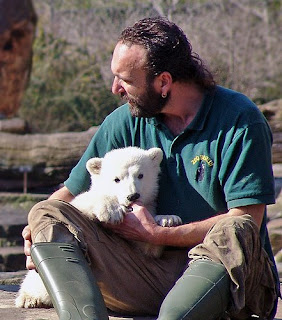 Thomas Doerflein of Berlin died yesterday, a heart attack at age 44. Normally, you would say that he was a undistinguished gentleman who simply worked over at the Berlin Zoo, and that would be the end of his contribution to our mighty world.

Thomas has a slight "*" attached to his name. He was the guy given the enormous task of taking a polar bear cub who was "dumped" by his mother, and nursing the bear to a normal point in life....where he would survive. For the weeks after being given this task....Thomas literally lived at the Zoo....twenty-four hours a day. The cub survived.

As Thomas reached a point where he could lessen his time with the cub....he still ended up spending sixteen hours a day at the zoo. He would never be paid overtime, although we can calculate that the Zoo did compensate him in some fashion. What they didn't grasp....was the mere act of letting him care for the tiny polar bear.....was all that he really wanted.

This tiny cub grew. The cub would come to be called "Knut". For some reason, the public bought this polar bear cub story hook, line, and sinker. The Zoo benefited by millions.

Sometime toward the end of last year....Knut grew too big to be handled by a helper, so he was given his fulltime bear pit at the Zoo. Thomas sneaked over once after this episode and tried to swim with Knut, and the Zoo staff got fairly upset. Knut was up around 150 pounds and could easily harm Thomas....so the close personal contact between Knut and Thomas came to an end. It wasn't a happy period for Thomas....he was awful close to the polar bear.

I'm guessing somewhere in heaven....God has a open zoo area where he's appointed Thomas as the personal bear keeper, and letting him play with the bears all day long. Thomas probably has claw marks all over himself....and is grinning from ear to ear.

So for a brief moment....from a prospective of a little polar bear.....Thomas was the best friend you could ever ask for....and literally stood in as father and mother.....with no complaints.
at Tuesday, September 23, 2008 No comments:

So a long investigation has led some folks to now think of Stonehenge as being a mystic "sick center", where these massive blueish stones dragged to the site kept people wondering why drag them such a distance?

Well....it is concluded that some folks identified the stones and the site as having healing properties and probably advertised this far and wide within that side of England. So people who had various ailments...got themselves somehow over to the site, for "healing".

Now.....as most of you know.....I consider Stonehenge as a "big cow field" where tourists are ripped off. I felt this way as I drove over the hill and saw the place for the first time. I haven't really changed much of my opinion.

I have to be honest.....I don't buy the prehistoric Lourdes act at Stonehenge. If you were to figure up such an angle to rip folks off....you'd have it near a lake or stream, where you'd tell them about the increased healing properties after touching the stones, and then bathing in the stream. People who travel a fair distance.....at least in those days.....had a preference to be near fresh water. Of course, I could use the logic of bringing up a massive amount of water and selling it near the "magic" stones...that would work as well. But frankly, I don't buy this story.

I still believe in the religious cult connection.....and it was still a rip-off of some type in the end. The Brits are famous for this....from Loch Ness....to various ghosts in castles. I have my doubts on the mystical sickness center story. I'm not buying it.
at Tuesday, September 23, 2008 No comments:

Email ThisBlogThis!Share to TwitterShare to FacebookShare to Pinterest
Labels: stonehenge

So for the past two years.....a steady increase in robbery's around Ramstein Air Base has occurred. Its all in the base blotter each Friday, and in the past six months....I'll bet on twenty theft episodes involving American vehicles in the Ramstein area. Everyone was complaining, and there were pointed fingers that the German cops just weren't doing a good job at this whole thing.

So last week, on one evening....the German cops came to Ramstein-Miesenbach (the town), and walked through in the evening hours....seeing how many left their cardoors unlocked. Out of 400 checked....sixty were unlocked and forty of the sixty.....were Americans. The German cops fiscated the belongings in each car, and took them to the station. Its safe to say that alot of them were plainly upset....and I won't repeat some of their negative commentary.

So, lets step back and ask the stupid questions....if you left your car unlocked....wouldn't you expect some punk to rob you? Would you be upset if they stole your radio or CD player? Would you feel so stupid that you wouldn't admit that you left the door unlocked?

What happens now? Well....I'm guessing the wing commander is rather upset. He'll direct the SPs to walk around base and check for unlocked vehicles at the BX and commissary. For a month or two.....it'll be a major thing where you have to respond to tickets or commander's calls if you left your cardoors unlocked.

There never was a real crime wave. They just invited trouble, and it came looking for them. In fifteen years living here....other than the kid's scooter which was stolen....thats the only time I ever got robbed. But I'm awful careful. I'm guessing the massive crime wave will stop overnight by next weekend.