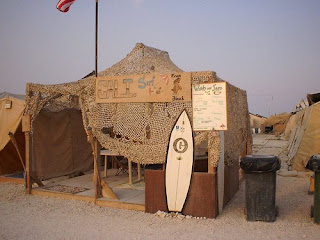 What you see here is a fine example of "house" in tent city. In my long and distinguished life....I've spent almost seven months living in such a mansion.

For those who haven't had the chance to experience tent city.....it is a rare experience.

My four months at Incirlik's tent city was enjoyable. We had around seven guys who occupied the tent. Each had a cubicle with an actual plywood door and walls. Each door had a lock and you had your "secure" home.

Your cubicle? It consisted of a bunk, a chair, and a locker. You had a lamp and a overhead light. You had AC in the tent which ran 24-hours a day. The entire cubicle was carpeted (cheaply).

There at the end of the tent was the storage room (for your water and toilet paper, and your living room. Each tent had three lazy-boy type chairs and a couch. A 24-inch TV sat there on the table. At the end of the room was a refrigerator.

Out front was our bar-b-q and picnic table. We had a tent-like cover and two chairs which a guy could sit and sip a Mountain Dew as the sun set.

The toilet? Sadly, it was 150 feet away. So when you had an urge in the middle of the night....it was a long walk over to the toilet. Same for the shower facility.

I always thought this concept ought to be sold as vacation huts for folks to get away from reality and just chill in the outback of some place.
at Saturday, September 27, 2008 1 comment:

It Cannot Be That We Are Not Informed

From today's Stars and Stripes here in Europe...an article on the closing of the Pirmasens US Army operation, and relocation of all assets to Sembach (barely thirty miles away). The German employees are apparently "shocked" and "upset".

Gerhard Hornbach, the spokesman for the German union on base "expressed disbelief regarding the US Army" move to Sembach. "I will get in touch with the people responsible in the subject matter as soon as possible" spoke Gerhard. And he adds: "It simply cannot be that we are not informed about such a plan".

In the 1950s and 1960s....unions in German learned the art of halting any significant changes in companies throughout the country. Every single decision in companies led to some internal discussion and fight between management and the unions.

By the 1980s....companies learned that it was easier to manufacture products from shoes, shirts and batteries to brake pads, washers, and teapots somewhere else. So the unions began to find that companies simply announced a downsizing in production....ten percent here....twenty percent there. Eventually, the plant was shut down....but the final 500 workers ended up being paid off into the tens of thousands each.

The US Army has learned the game well. They have various folks on the payroll to conduct real planning and then form action plans. There isn't a single bit of interaction with the union guys because they really aren't part of the "solution". They end being part of the "problem".

The curious thing in the whine of the union speaker is that Sembach barely lies thirty miles away. Most people in the US would say no problem and drive the 35-minute route (it is practically all autobahn the entire way). I'm pretty sure the whine of the union will be that they never planned to drive such a "drastic" distance. The US side will likely offer them a choice of driving that distance or taking $25k as they are dismissed (guys with ten years on average). The guys with 25 years? They might take home $80k, if the full load of negotiations take place, but then they are the guys who will never find another job paying the same rate that they make today. Only a fool would take the dismissal payoff and then face a poor local market for jobs.

The last amusing part of this entire game....revolves around the fact that we are likely talking about 2012 before things actually happen. Yep...almost four years away. To be shocked or upset, with four years of actual notice....makes you a bit of a fool. Anyway.....just another day in the big "D".
at Saturday, September 27, 2008 No comments:

A Moment of Paul Newman 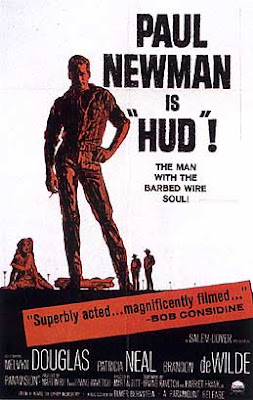 Paul Newman has departed this earth...and before doing so....contributed a vast amount of superior acting and great movies to our little world. My favorite Newman movie of all time? HUD. It rarely comes on....if you were lucky in a ten-year period....you might have one opportunity to watch the movie. I'm guessing over the next week....you might have another chance. Watch it, and be entertained.

I will admit that I am very drawn to Butch Cassidy and the Sundance Kid. So its running a close second to HUD. There are a dozen movies that I'd have to say are worth watching from the Newman series.

My Porch and Welcome to It 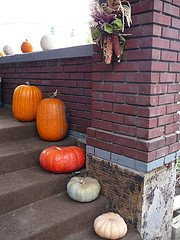 Fall is coming, to front porches all across America. Fall is festive in some sort of reasoning. Its pumpkin time. Its Halloween approaching. Its harvest season. Its a chill in the air as the sun starts to set earlier and you sit there with a cup of coffee and get the best of what life has to offer.

Neighbors come less often. Friends and relatives visit half as often. Its not personal; they just don't like the chill. Meanwhile you sit and look at the leaves gathering in the yard. You ponder the corner of the yard where you're gather all the leaves and have a good burn, unless your neighbors are sensitive about such things.

You sip the coffee and get the caffeine so desperately that your body craves. You'd like a smoke but you gave that up four years ago and know it'll kill you if you start up again. You'd like a beer but the spouse got all over you for drinking on the porch and making a fool out of yourself. You'd like to have a TV on the porch to watch Fox news but then most of your neighbors are Democrats. Your local paper delivery kid has been late everyday for a month and you barely get the paper before 6PM....leaving so little time to read every last word.

You sit there in fear that the local Baptist minister will stop by and want to chat....which you really can't stand the guy. You sit there with a tear in your eye....thinking of the family dog of twelve years who passed onto dog heaven back in August. You look at the neighbor's bedroom window where she stands there with just a bra on and thinking that she must be a exhibitionist. You watch the clouds as they gather above in a dark fashion....expecting rain by late tonight.

Its fall and the porch is your empire. It is your castle of mental thought. It is a place where you escape to and ponder vast things which might be significant or of no concern. Life goes on tomorrow....and it'll be a new day on the porch. And your pulse? Damn....its real low....you relaxed a wee bit too much. So its time to wander inside and watch some wrestling and get back to the right pulse count. Life goes on.
at Saturday, September 27, 2008 1 comment:

With the recent demise of Bruce E. Ivins....the accused mastermind of the anthrax problems of 9-11 period....we come this week to an interesting discovery. We now know that he had a total seven e-mail accounts that he kept active.

So it leaves me kinda curious why he'd have seven active e-mail accounts.
at Saturday, September 27, 2008 No comments: 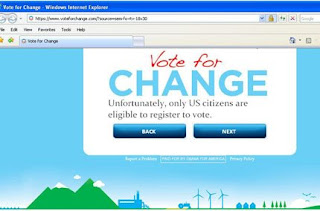 Kinda humorous, over at the Michelle Malkin site, there is the site clip of the Obama campaign, where they are trying to get you to a registration point for your state or region. There is a "back" button and a "next" button. But the message here is "Unfortunately, only US citizens are eligible to register to vote".

If you take a moment to notice the pictures in the background....the mountains, the windmills....this is Europe. Its interesting that they'd toss up this background for this message.

How easy would it be for a German to travel to the US and register in New York? Out of ten guys attempting a absentee ballot opportunity....I'd take a pretty good guess that seven of the ten would get registered and would vote. The situation would vary in other states. In Colorado....I'd say that all ten could register and vote in such a manner. In Bama...probably two.

Do we have a problem here? Yes....and we've spoken about this for twenty years. Congress and the Senate don't want to fix the problem. So we'll continue to register Joe Smith from the Bronx in the New York election, the Florida election where he vacations three months out of the year, and in New Jersey where he owns a condo and goes to four weekends out of the year. And Karl Schmidt from Frankfurt, Germany? Yep, we'll register Karl in Colorado where he vacationed this summer and pretended to be a Coloradan. And that Juan Cruz from Mexico City? Yep, we'll register him in Florida as he pretends to be American but only works in the US forty-four weeks out of the year.

America, the home of the brave and unAmerican vote.
at Saturday, September 27, 2008 No comments: