Graduate Dope of a University

So today, we have the dean of the University of Nebraska College of Law saying that its OK to admit minority students, even if they may have lower test scores than the non-minority students that the school turns down. Steven Willborn went onto say that minority students have to be “helped” in this fashion to add diverse opinions to classroom discussions.

Basically, he is indicating that twenty non-minority students in a class….can’t convey or argue a point on minority legal situations, unless they can see the kid in the class and he helps argue the point. What Steve didn’t mention…which might be interesting….is that the minority kid might not agree with minority placements or special favors. In fact, the kid might be of the idea that no special favors should ever be given out. But Steve didn’t want to discuss that possible idea.

Steve had to comment on this because of a study which got released earlier in the week which suggested the law school discriminated against non-minority students by admitting minorities with lower scores. Steve’s comeback…..which was kinda curious…the school never gave out data to show any race of the students attending. The officials have kinda kept this close hold, to avoid any discussion.

Now if I were of a wondering mind….why hold data? Why prevent openness? By using this tactic….you basically are making your entire case and operation suspect to corruption or incompetence.

A note to Steve and how things work in the real world. When you lower your standards and force the entire system to a lower scale….it becomes noted after a while. Your graduates become suspect. There are various university programs throughout the US today which hand out graduates to the public sector….who aren’t capable of doing what they were supposed to be capable of. Companies know this. They tend to avoid the hiring of these folks. The folks in question….end up in lower-end situations….and never make back up the standing they got stuck with….because of some kindly school administrators. Instead of helping folks…..you basically stuck in a bad situation with no real escape.
at Saturday, October 11, 2008 1 comment:

This week....out in Georgia....in Cobb county....the local police department got themselves a refurbished Armored Personnel Carrier for officers to use in SWAT situations.

For those who aren't keen on such vehicles....this is a LAV 300 Light Armoved Vehicle. Its for CRIME fighting.

Normally.....if you were the Army.....you'd pay around half a million for it. In this case, it was a donation, and they county paid $45k to fix it for local use.

This six-wheel vehicle can hold nine cops and carries thermal sensors, computerized tracking devices, night vision, and tear gas launchers. The cops got all smiley and proudly proclaimed that their new "tank" has a new engine and can reach a speed of 60 miles per hour on the open road.

I kinda stood there for a minute pondering this episode. The cops spent their own money (county board gave it to them) and it might be used a couple of times per year. But you run into folks who want to drag out the tank and destroy an entire home or apartment building...just for show purposes. This isn't law enforcement....its a "dog and pony" show.

The amusing thing...having worked with a former Army tanker...is that tanks break down often. As my associate would say....if he got thirty miles off his vehicle (which was five years old)...before some minor problem....he felt lucky. If he got 100 miles before a major problem....he felt extra special lucky.

So figure out the normal operation.

Uncle Bud calls the cops because junior is hold up in the shed with rifles and is on some drug binge.

The Cobb cops call Jimmy Joe (chief tanker) to bring out the vehicle. Its a 14-mile trip to the shed in question.

Halfway out to the shed....Jimmy Joe discovers that the oil pressure is rapidly declining. He has a oil leak. He stops off at Barney's tackle shop and buys five cases of oil, and tosses half of that into the tank. He charges this on the department credit card (where he makes $7k worth of oil purchase a year).

Jimmy Joe drives on....then having a bearing problem somewhere and has Claude and Derrik (the county cop mechanics) come out and size up the problem. Luckily, they carry a bearing (they have forty on the shelf because they know they wear out fast). The boys fix that (nine hour wait).

The tank finally arrives at Uncle Bud's farm but by this point.....fifteen hours later, junior's drug binge is over and the one cop there apprehended junior.

The shed was never destroyed...which Uncle Jimmy is grateful for....and Jimmy Joe limps his tank back to the squad area...with the leftover remains of the oil he bought. The local news crew from Channel Nine stayed the whole fifteen hours hoping for a shed destruction episode....and ended up drinking up all of Uncle Bud's personal beer and then trashed up his new toilet that he got from Home Depot.

Jimmy Joe eventually gets the tank back to the shop and cries all evening to his illegal alien girlfriend from Honduras about the poor tanker showing.....then guzzles up a bunch of booze. The county sheriff is upset because he needed a fair showing to demonstrate his power and ensure the next election is his. 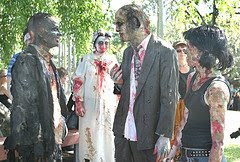 Out in Texas this week....in Harris county....some folks started to compare the dead list with voter registrations. There were four thousand dead folks registered to vote. Course, no one has rightly said that dead folks in Texas are to be denied a right to vote....I'm waiting on some special interest group to point this out. In one case....Gloria Giudry actually voted in the March 2008 primary. Gloria had been dead for ten months.

According to a Texas state audit recently completed....there are almost 50,000 registered voters who simply can't vote. Roughly 23,000 are dead folks, and another roughly 23,000 voters are folks with felony convictions who can't vote either. Then they had around 2,400 voters who were dual registered....different counties of course. So the state is attempting a purge of the voting records. Some folks are upset about this....at least seen via the press. The curious thing is that the folks registered in the dual capacity....if the state Attorney General decides to get involved (which he might).....could face actual felony charges. If convicted, they lose their vote forever (or until the governor pardons them).

In Milwaukee, Wis....the state guys are onto some scheme that the ACORN folks was a party to....and there appears to be a fair number of imaginary folks (not ZOMBIES) that were registered this year. Down in Miami, the registration guys woke up and realized that some guy had 21 duplicate applications in his possession. If there were a hundred more already executed somewhere else....no one knows. In Nevada.....there is the case of some Dallas Cowboy player names being used to register bogus guys.

I pondered this vast democracy and the whacked-up situation of voting. The national guys won't fix it....because it'd ruin their method of controlling and helping win elections. If anyone cared....it'd be at the state or local level. The real key? Bring in two or three young grad's from law schools....for each county.....and start prosecuting. Take folks down.....make them spend a couple of months in county jail and make them cough up $10k for lawyer costs and fines at the end. That would really scare a number of folks who've been playing this game for years. Organizations that have used tactics and methods to mass register bogus folks....dump their tax-free status and haul their boss into court. Make them spend money on defending themselves.

Somewhere out there, there is a "Zombies for Obama" group, and they've likely had short grunting conversations over how to help their guy. I realize we've kinda impacted their agenda and screwed up their plans.....but its democracy at work. I realize there is a "Insane nuts for McCain" group, with thousands upon thousands of folks at mental hospitals who are registered for McCain and his efforts.....but they are in the same category. Something is wrong in America, and has got to be fixed.
at Saturday, October 11, 2008 No comments: