Joe and Whats Left of America

My previous blog told a pretty sorrowful story. Joe, a 66-year old dude....sitting in jail because of dead grass. You can read the blog below and get the beginning of the story. This is the end of the story....and you'll wipe away a tear by the end.

There is this former Marine....(once a Marine, always a Marine)....Andy Law....who was eating breakfast with his girlfriend, Mary....when she pulled out the paper and showed him the "Joe" story. She made Andy read it.

Andy got up......"This is not right" was spoken, and then he got right down to business. He is by the word of association....a Marine....tough as a bastard and able to make up for what can't be done by mere mortals. Andy has a handyman business, which is collapsing because of the current chaos in Florida housing and markets. Before it collapse though, he's got something to fix....namely Joe's problem.

As he walked out the door....with his girlfriend looking at him.....Andy simply said "I'm going to help," and he closed the door.

Joe's wife is Pat. Joe had been married to Pat for over 20 years. It would be a correct statement to say that Pat was a bit fiery and with a slight temper.

Pat opened the door to her home after a very persistent knock.....to find this old Marine....Andy....standing there.

Andy hustled up a plan. Andy found a guy to let him borrow a machine to remove the old grass. Andy found a company or two who donated sod. Andy found help. Andy found Pasco County Commissioner Jack Mariano (who also read the story) and with the efforts of others....they laid sod. Andy found the guy who would fix the sprinkler. Folks started stopping by and dropping off checks.

Somewhere in the midst of this.....a neighbor wept because she felt faith in humanity restored.

As the sun started to set.....the yard was done. As folks prepared to leave.....a sudden dark cloud appeared and honest-to-God rain fell upon this new sod....the kind of water that makes grass happy and green. When the rain finally stopped....a rainbow stretched over the yard.

Joe got his court hearing on Sunday morning, arranged by Mariano, Pasco Sheriff Bob White and others. He got released, although fines are still required to be paid.

This is the moment of inspiration when you need to say: "I've got a problem, and I need your help". Joe got it.....a thousand times over.

So out there somewhere tonight is this former Marine....Andy. His girlfriend is kinda lucky. She's got something that alot of women don't have, and will never feel. This is a guy who picks up problems and fixes them....without being asked. Rainbows follow Andy where ever he might go. 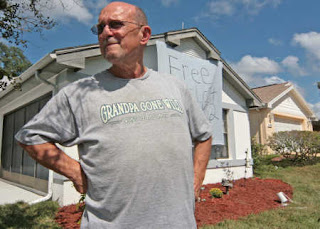 This is the first of two blogs. The jail in Land O'Lakes, Florida is a pretty special place. They keep drug dealers, robbers, rapists, killers, spaced out punks and old guys with dead yard grass.

There is a pause here....because I know you read the last one twice over.....dead yard grass.

Joe Prudente is the guy doing dead yard grass time in the city jail of Land O'Lakes. Its a pretty tough town....where you can get jail over dead grass....and not the type you smoke.

His real crime....Joe apparently disobeyed a court order that he sod the lawn at his Beacon Woods home. You see, Joe wasn't even offered a deal or bail.

Joe is 66 and must remain in the County jail in Land O'Lakes until required sod work is completed. Even the local circuit judge agreed.

His daughter was kinda upset: "He's in prison for God knows how long because we can't afford to sod the lawn."

Joe apparently owns a home in a tough deed restricted community....has been since 1998. Some guys wrote up a rule that require homeowners to keep their lawns covered with grass.

The local Beacon Woods Civic Association took Joe into court when he just wouldn't install new sod on his dying lawn. It was dying because his sprinklers broke. The boys in the association had already sent letters telling him to resod his front and back yards by certain dates.

Somewhere in the midst of this.....Joe has serious case of Americana financial hardship....similar to what all of these other fools have throughout the US.....his brilliant tactic in the late 1990s.....buying into the adjustable rate mortgage deal....recently caused his monthly rate to go up another extra $600 a month. Somewhere along the way....the bank Wachovia repossessed his Toyota Scion. His daughter and her two young children, in financial bad times as well....had to move in with him his wife.

Joe is treading water. He is trying to keep the house....which might be the only real thing that he has left, and live off his retirement check and social security.

Adding to all this personal trouble....because of the dead grass episode....the local court awarded the association $795 in fees, which included a $645 attorney's fees and a $150 fee for "an expert witness." So thats another $1500 out of Joe's pocket. Rather than help him....his "friends" in the association want to screw him as much as possible.

The sorrowful folks over at Beacon Woods association....expressed "regret" (cough, cough, cough). Joe shouldn't be in jail, but as they end up saying in the end of their little statement....it was his own doing. Green sod or jail....its the Beacon Woods way.

"It's a sad situation, but in the end, I have to say he brought it upon himself." said board president Bob Ryan.

Joe's family is fairly upset by this entire game and the legal play displayed. They've kinda hinted that its amazing that a community survives with this concept of restrictions and legal power.

So today....in the Land O'Lakes is housing a fairly tough desperado....who won't be taken down. They've got the best guards in Florida guarding this guy....feeding him practically $8 worth of food per day and marching out to a yard for a couple of hours of exercise. The jail is a fairly packed place....originally built for 782 dudes....the population is up to 1,132.....of which we can't say how many are Bacon "Bits" Woods association violators. It might be one....it might be 50.

The thing that matters here.....is that folks in Land O'Lakes are tough bastards. And the top tough bastard....Joe Prudente. Joe is a survivor.

So a salute to a tough old bastard. Joe can share a ice tea on my porch any day of the week. You folks from the Bacon "Bits" Woods association....you need to keep your distance from my porch. You wouldn't survive long in my kind of community....so stay in the restricted area and enjoy the green grass....while it is green.

A quiet admission....I listen to Cartalk every Sunday morning. This past week, they had a moment of wisdom from which I had learned long ago and it was worth repeating.

When you get into a deep and bad situation....go to someone...anyone....and simply say: "I have a problem, and I need your help."

Look into the eyes of this person, and say this with every bit of sincerity possible. That person will help you without discussion. It doesn't matter if they are a total stranger....the moment you speak those words....they will cross the line and help you.

I've found a dozen-odd situations in my life where such help was needed....and it beyond what you'd call routine or normal. I've been at both ends of this spectrum...the guy with the problem and the guy called up to solve the problem.

What Tom and Ray advised was advice worthy of Socrates or Plato.