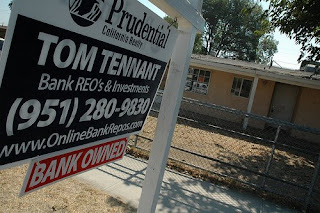 Just something to ponder, but we are on track now to build the fewest houses since 1945. There are thousands of houses in Florida, Phoenix, Vegas and the entire state of California, that sit empty. Apartment rentals appear from other sources to be at a fairly significant high. Folks can't afford houses, they can't show good credit, and they can't make the payments. This might make you ponder how things will develop over the next two or three years.

The fix? Think about this for a minute. Only your congress can save us....by giving out cheap easy loans and blessing folks with bad credit....so they can buy houses and trigger a construction boom. This is exactly how we got into the current mess of today.

Prepare for a repeat of this boom and bust....by 2018....compliments of our congress.

Pennsylvania has begun a major effort to cut electricity use, requiring the state's 11 utilities to not only stop power usage from rising, but to cut it starting in 2011. In an effort of extreme foolishness....legislation was passed in Pennsylvania and the governor (Ed Rendell) even signed it....that now requires the utilities to cut annual electricity usage by at least 1 percent by May 31, 2011. This is to be apparently based on based on usage estimates made by state regulators (your friendly state folks). They did agree that they could take into account such strange events....such as a an unusual hot summer or a unusual cold winter. Plus they even included the possibility that a new company might appear out of thin air in the great state.....and demand electricity as well (don't count on it).

In the midst of this legislation....there is up to $20 million in penalties for failure to meet the benchmarks for electricity usage cuts.

Sonny Popowsky (state utility consumer advocate) spoke "That certainly should get the companies to look at what's been going on around the country and adopt some of the more successful programs,"

So my passion in life is to analyze and provide the next step or the next stumble....allow me a minute to ponder the impact of this law. If I lived on meager wages or a set retirement income....and 2012 rolled around....then some letter came to my house to say that I hadn't met the annual one percent cut and I was being assessed a fee tacked onto my yearly cost of $150....I would start to get upset. Thats $150 less in my pocket and $150 in the revenue pocket of the state.

Next year....because I didn't meet that one-percent decrease....it jumped a notch to $225 a year for the annual fee of "failure".

By 2014 and the third consecutive year of failure to meet the expected one-percent decrease....it'd likely be up to around $290 for my yearly extra fee (my figure of estimate, remember...these guys aren't even hinting what a typical little guy will be assessed at this point....its all state big-numbers).

By 2015, I'd be thinking very much about moving out of the state. This would be ample encouragement.

But lets go to the middle-class situation....where Joe "The Plumber" owns a nice enterprise that has eight employees and a nice showroom to demonstrate potential bathrooms or showers that Joe could install. The electrical cuts don't come in 2012.....and because this is a business....the yearly fee would likely rate up near $1000 for such a small business like this. Its not a major amount for Joe....but still, it will increase. By 2014....and Joe's failure to cut that one percent off any yearly usage....it's likely up to $2000 a year in fees. What does Joe do? Joe passes this cost off to his customers and they pay it for him.

So that little guy who was thinking that he was only assessed $290 a year in additional costs? You can figure that after all of these little businesses and operations get finished....its a total yearly add-on of $750 that you will contribute to the state government via yourself and your purchases.

Just your friendly government at work. And for those of you from Pennsylvania.....I'll pray for you tonight.....and if you are interested in moving to Bama.....we'll welcome you with open arms.

Email ThisBlogThis!Share to TwitterShare to FacebookShare to Pinterest
Labels: pennsylvania

I blogged a brief comment or two on health care and the Hawaii "experiment" in universal child health care, which spiral out of control.

When the dimwits show up to talk on CNN....its all rigged up in bit-sized portions to feed the typical dead-head CNN viewer. So let me offer up the way that universal health care works:

First, you have to remove the "arrangement" that doctors, insurers and hospitals have over profit. There is a magic profit number across every single health care policy today. Until you remove that arrangement....you can't move to the first step.

Second.....at some point...the federal government will have to step in and control medical technology, the quality offered at hospitals and hospital construction. No one in the health industry wants that control. But to make universal pricing work....it must be involved.

Third.....drug prices are going to have to be set by the federal government. The idea that a company can charge what they want....won't work. The potential for waivers to be handed out by congress in this type of situation.....almost 100 percent. But there has to be a set price across the entire US for a drug....with a fair profit set for the pharmacy folks and the maker of the drug.

Fourth. No "pre-existing conditions" allowed in a universal plan. Everyone is accepted.

Fifth. Wellness matters somewhere in this food chain. Obese folks and smokers are issues. You have to eliminate them or "punish" them in some fashion. Same for alcoholics and heavy drug users.

Sixth and final. A national health card and data base will have to exist. If someone walks in to get pain killers at one doctor's place and then an hour later shows up at another place for more pain killers....it'll bankrupt the system.

So thats my two cents on universal health care. It won't work in America....trust me. I've seen it at work in Germany, and it barely works here. Doctors, nurses and hospital owners appreciate it less and less. Doctors leave Germany every year. Nurses complain about the significant pay difference between working here in Germany and the US.
at Saturday, October 18, 2008 No comments:

Up in New Hampshire this week, Senator Obama arrived and delivered a major speech. It was a curious speech, with an amusing theme.

The central theme of his entire campaign effort....has been change. Everyone appears to be overdosing on this concept and want dramatic change. They aren't really talking about how this change works, or how it will pass congress, or even how people will eventually perceive change when they were huge supporters of it.

Folks in Hawaii were demanding change several years ago. The governor, a Democrat, Linda Lingel delivered. Hawaii was the first state to offer universal child health care. It was an impressive deal. It was a very low set rate and every kid in the state was to be covered. This week, Governor Lingel announced the end of the universal child health care program. Apparently, they designed the program for the lesser income folks and few middle class folks would have been involved (they already had full up health care via their company or their business). Well....change in this case didn't work. Everyone started dropping their health care....including the middle class. The state ran up a huge debt. So this week.....universal child health care, a change in life, ended in Hawaii....by order of the governor.

I'm guessing as Obama wins the presidency....he will find a vast number of doors open to change. But in four years, after the reality of change hits folks.....he isn't quiet the same candidate as before.

What remained from this New Hampshire stop and the great speech given.....was a comment or two by a lone McCain supporter who came up to observe Obama face-to-face. "McCain has lost," said Deborah Barnhart, 48, who supports the old senator from Arizona. "He's lost because the Messiah has spoken and we're going to change the world. That's all people want to hear after eight years of Bush. Obama thinks he's won. Everyone here thinks he's won."

So prepare. Change is coming. Change will take ahold of your life, your spirit, your taxes, your house, your neighbors, your radio station, your future. After a while....change might be the last thing on earth that you care to hear from any candidate.