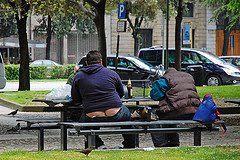 A federal judge yesterday in Ohio determined that if you simply walked in and registered yourself to vote and gave only a park bench, or area under a bridge, or a tree, or even a poucho hung over a tree limb....you were safe to vote and no one could challenge you.

I sat there....pondering this event. In Bama.....there simply isn't a local who would accept such a mentality. Either you live somewhere or you don't. A bench doesn't count. Neither would a poucho or area under a bridge. I have a problem with this kind of acceptance. We might as accept mentally insane folks as well.

My answer? Thanks to Bush and the Democrats.....I can solve the problem....with a simple national ID card. And no, you won't pay a dime.

Since our dimwits have plenty of cash to flush across for folks.....we can afford this. Here is the deal.....we give each county sufficient systems to produce the IDs. As you fill out your taxes....the IRS folks send you back a voucher, and you go down and get your national ID. The card last five years, so you toss out the vouchers unless its your year to get a new ID.

Everything is tied you doing your taxes.....or at least sending in a form. If you aren't a citizen.....you don't pay taxes. So don't worry.....you won't need a card.

Once you go down to the county office...we ask for the birth certificate and some picture ID.....drivers license or military ID or passport. You produce the required evidence, and the voucher....then you get a free ID. No charge. You only get the ID if you are 18 or over. You want to register to vote or show up at the poll to vote...show the ID. No birth certificate or you can't afford it.....fine, we give you another voucher to pay for the birth certificate.....compliments of any state. Again, those fine Democrats and Bush found lots of cash to hand out earlier in the year, and they'd like to hand out more now. Let them.

No complaints, no cost, and total simplicity. The vouchers? The county office turns them into a state IRS office and gets paid for each ID produced. Clerks producing false IDs or handing out without proper documentation? A five-year sentence for each ID.....with no deals for the DA to hand out.

Like alot of folks.....I'm tired of this game. Either we play it this way or we all go out and pretend to be bums in Ohio.....and register in twelve counties as homeless bums....and vote, vote, vote!
at Wednesday, October 29, 2008 1 comment: 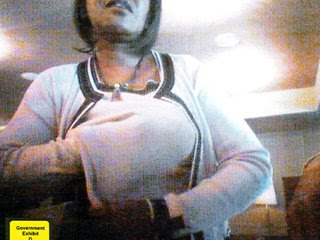 Sen. Dianne Wilkerson of the Massachutes state senate....is a gal that we ought to admire. This week, at a little pub near the senate building....she met with a couple of guys and took a bribe($23k). After receipt of the funds....she piled them into her bra (see photo). The boys actually video-taped this whole thing and even released the video.

This brings up a topic that only a Bama guy would have. I've often noticed that women tend to have extra large bras....even if they can't really fill them. Naturally, I won't admit how I've come to this analysis....but I now suspect that they always kept bigger bras around.....to fill with cash....like senator Dianne did. Just my suspicion....that they are all walking around with $3k in twenties. Yep, just my thoughts on this topic.