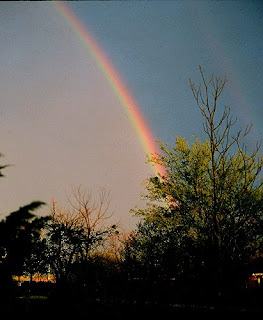 So when the clouds develop around you....the tests of life weigh upon you like an anchor...the bitterness of lemon is on your tongue....and a wee bit of sorrow and woes tugs upon your heart....sit for a moment and catch a moment of Israel Kamakawiwo'ole.

As you click on his name, you are taken to YouTube and you get a chance to recover something you've lost. Sit there and enjoy Somewhere Over the Rainbow. You needed it.

And when its done....just release a bit of stress and pain in your soul. The day will not be bad as you thought it was.
at Sunday, November 16, 2008 1 comment:

Email ThisBlogThis!Share to TwitterShare to FacebookShare to Pinterest
Labels: somewhere over the rainbow 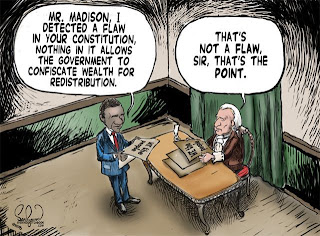 I saw this today and felt it appropriate. There are various discussions going on with the idea of redistribution of wealth. Frankly, had you brought this up back in 1776....this would not have been allowed. Even in the 1800s....it would be very unsettling to most Americans. So here we are in 2008...and folks can contemplate and envision redistribution of wealth via taxes.

Will this occur? My imagination can see a scenario where we simply keep handing out stimulus checks for the next four years and pretending this is a redistribution of wealth game...without having to pass anything via congress. This is the safe way of pretending that you accomplished something with nothing done.

The truth of taking from the rich to give to the poor? Well...at some magic point...business owners will band together and get a dimwitted congressman to write a line or two into tax code. It'll be enough to claim various credits which amount to ten percent of the Obama tax on the wealthy deal. The next week...another congressman will write another line of tax code....and do another ten percent. Eventually....all of the taxes you thought would fall upon the rich....don't. Then you have the middle class supporting this entire game. Add into this game...the players who refuse to play on US soil....and hide their money in Panama, South Africa or Russia.

In the end, Madison's version of the constitution kinda survives because actual true redistribution never takes off and never works like the Obama team talks about.

The Men of Risk This week....Germany's Chancellor....Angela Merkel....push for a "world risk map" of global financial institutions to allow financial authorities to quickly identify future trouble spots. Naturally, she needs a bunch of dopey country leaders to agree to this "risk" map.

Naturally, as a Bama-ite...I had a moment of pondering over this map and the events that would unfold.

First, it would take a whole bunch of Harvard, Yale, Princeton and Colombia business school graduates to ensure the bitter failure of the "world risk map". We'd have to recruit several past generations of the four universities to ensure the adequate number of folks involved....preferably around 3,000 former graduates.

Then the question of where the "world risk map" players would be living? I believe the south of France would be the best overall site....where members of the "risk-team" could live and breathe amongst free-minded Frenchmen. Others might suggest Ottawa or Montreal. Still others might suggest Moscow or in the UK: Penistone, Titty Hill or Land of Nod (actual real Brit city names).

Would the risk-team meet for maneuvers or scenarios? Yes....and I'm guessing that they would be playing the game "risk" on a daily basis...to sharpen their skills. Occasionally, a Monopoly game or lawn darts would be tossed to the boys to get their mind off serious business.

Somewhere toward the end of this entire episode....these guys would generate special identification cards and start referring to themselves as members of "RISK"....and act like some Man from Uncle evil group. It'll be at this point that Merkel and the rest of the world realize that RISK group has become a threat to world peace....and represent a true threat. Then we'd have to call their bluff and send in the new and updated modern version of Napoleon Solo to take out RISK.

One of my favorite topics....is Hurricane Katrina....which has yet to end. This week.....after Louisiana's request for a second month of disaster food stamps for 13 parishes was denied, their local congressman called for an extension of eligibility. Somewhere in the midst of this episode....is Congressman William Jefferson. Right now....the state of Louisiana is asking for extra help and benefits for residents in Acadia, Allen, Beauregard, Jefferson Davis, Lafourche, Livingston, Orleans, Plaquemines, Sabine, St. Martin, St. Tammany, Tangipahoa and Vernon parishes.

The nice thing about this request is that the folks there can claim that they really haven't finished off the Katrina episode and they have the recent Hurricane Gustav also now to recover from.....along with flooding (as always).

What gives these guys an extra point in this discussion is that car companies and investment bankers need bailout.....so naturally....wouldn't the folks down in New Orleans need bailout too?

I have little sympathy for anyone who stayed in New Orleans. I realize the homes and businesses lost....and the dramatic impact on lives....but the area is a magnet for damage in any single storm. This idea of continued food stamps? Well....you could continue this game...but when exactly will Katrina ever end? Will we still be discussing federal aid in 2019? Thats the question on my mind.

The One Difference in This Election

I sat and paused over the twelve-odd days since the election and thought over what did happen and didn't happen in this election year. I came to one big difference between 2008 and 2004. The National Geographic cover that came right before the 2004 election period.

The boys at NG believed that they could slip in some behavior modification and encourage folks to shift their vote. Had they done this story in January or February of that year....it would have passed the common sense point. It was in the heat of the race....so it wasn't just a easy blunder.

What occurred after the issue came out...became a more fascinating topic. Even today...NG will not admit how many subscriptions were lost by the tactic. The best guess is that the magazine lost around five to ten percent of its subscription base. For those who don't grasp the impact....subscriptions are the guaranteed sale of a product...so you can walk into the bank and proudly say you've got these many on the hook and you want this amount of credit....with no issues. Without that number....you start to have questions asked.

This year? They quietly sat in the corner and said nothing. They knew not to make a statement by prior lessons. Its hard to get new folks addicted to the magazine because its just not the kind of thing that seventy-five percent of American society reads. So somewhere out there....is this little story that few ever talk about in the NG circles....mostly because they really screwed up.