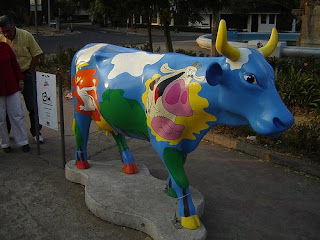 I've been waiting years and years for an act of stupidity of this level....and it finally arrived. Some folks within the Environmental Protection Agency have decided that cows belch and offer up too many farts....thus triggering air pollution....so they want to tax cows....and their owners, the farmers.

Ron Sparks......Bama Ag Commissioner has even spoken on this serious matter: "This is one of the most ridiculous things the federal government has tried to do."

Some serious ranch folks have sat down and figure each "real" ranch might be paying as much as $30,000 a year.....and most folks think this would bankrupt them in the long run.

The thing that most experts point out (from the cattle field)....is that the real solution then would be for groceries to import their beef from foreign countries, where no fee exists. The EPA guys and the dimwits with the environmental movement? Well.....they really hadn't considered this trick....but they'd likely extend just more taxes on imported food and destroy those foreign folks just as quickly as they destroyed the American farms and ranches.

The EPA says they really taken a position on the proposal....it is simply in the stage of being discussed.

Some folks with the environmental movements have spoken of hopes within this proposal of motivating farms and ranches into switching to healthier crops......but every attempt to explain this.....involves going into the vegetarian routine. The only meat they haven't attacked with idea are fish.

I will offer two observations on this deal. First....an act like this....requires enforcement. Being from Bama.....I can pretty much tell you that no state or local law enforcement guy is going to enforce this. In fact....when a EPA guy shows up to attempt enforcement.....he will find not only the locals hostile toward him....but the local cops and county sheriff will be extremely hostile. Some EPA inspectors might quit after a month of inspecting....in fear of their lives.

Second.....it seems to me that we'd simply turn beef into "mary-j-u-wanna" and we'd have secret farmers and ranchers out there.....with dealers on the street....offering up a kilo of beef.....without any strings attached. There would be commercials on TV....where a couple of dudes would meet up and the expression uttered by one would be "dude, got some beef?" Currently Bama is regarded as the biggest "mary-j-u-wanna" producer in America....and we'd be damn proud to be the biggest secret beef producer as well.

Frankly.....from a man who ponders much.....I will offer this wisdom. Why is it necessary to get into people's personal lives.....forcing them toward vegetarian behavior? Why? This is merely a game that the EPA is using here.....where no one really believes much of anything they say. The fools who suggested this type of transformation? They sit around and think of ways to make people different. They have no will....no strength....and no motivation for themselves.